The forage outlook for much of the Southern Plains and Northern Plains is cloudy as these regions are in varying designations of drought, which could limit production. In the Central Plains, east into the Corn Belt, ample rainfall this spring has lessened drought concerns and better production is expected.

Other factors such pests, diseases and even higher fertilizer prices will test forage producers' resolve this growing season.

The Southern Plains, meanwhile, shows different stages of drought across Texas, up through parts of Oklahoma and Kansas. Extreme drought is present in some areas of west and south Texas.

DTN Senior Ag Meteorologist Bryce Anderson said the forecast for the Plains region calls for warmer than normal temperatures and below normal precipitation for May. These conditions will only extend the Plains drought, he said.

Temperatures in May could average 2 to 4 degrees Fahrenheit warmer. Precipitation may be slightly above normal for the Plains -- except the very dry Northern Plains, he said.

"After that, June brings normal potential in the Midwest but below normal through the Plains, with July and August offering below normal precipitation in most of the top forage areas," Anderson said.

DAKOTAS' I-29 FORAGES IN GOOD SHAPE

Jeff Jackson, alfalfa and forage specialist for CROPLAND-Winfield United, said he was "pleasantly surprised" at the condition of forages along Interstate 29 from Kansas City all the way north to Fargo, North Dakota. He spent most of the third week of April in the region examining fields and talking to producers.

Most of the alfalfa fields he looked at where in fairly good shape after the winter. Despite extreme cold temperatures in the region in February, incidents of winterkill were not widespread.

Winterkill in alfalfa can be caused by both standing water damaging the plants and crownroots being exposed to cold temperatures. The soil can hold some heat, which in turn can protect the roots during cold snaps.

"I think this (lack of winterkill) had to do with the dry summer and fall we saw last year," Jackson said. "There wasn't much standing water so there wasn't much damage."

Jackson said he did not see much evidence of forages damaged by drought; that damage is mainly further west in the Dakotas. Some areas might have been drier than others, but what he noticed was alfalfa plants only a couple inches tall as it has been fairly cold recently.

Alfalfa around Sioux Falls, South Dakota, could be set back some after freezing temperatures in the region at midweek. The damage shouldn't be too severe but could nip some leaves off alfalfa plants, he said.

The Southern Plains faces its own drought issues. Derrell Peel, Oklahoma State University Extension livestock marketing specialist, wrote in The Cow Calf Corner newsletter on April 19 in many parts of the country drought is even worse than one year earlier.

What happens in the next two months may determine much of the forage production for the next 12 months, he wrote. Short of rain in the coming weeks in parts of the Northern Plains and Southern Plains, producers will be facing limited forage and herd liquidation may have already started and may accelerate quickly in drought-plagued regions.

Most of Oklahoma has had some moisture to begin early season forage growth. But this crop is at risk to a limited growing season if the rains stop, Peel wrote.

Except for northeastern Texas, the entire state has different stages of drought. Producers will need to make smart stocking rate decisions to minimize overgrazing prior to extreme drought conditions, she said.

"Data on P fertilization of bermudagrass are limited," Corriher-Olson said. "Most data show a yield increase of about one ton of forage per acre when soil test phosphorus is low and phosphorus is applied at the recommended rate."

Deficiencies in potash affect both yield losses and stand reductions, she said. Research has shown an increase of about two tons in forage yield per acre where potash was applied at recommended levels on soils testing very low.

Anderson said the Central Plains east into much of the Midwest has no drought depiction all the way through July, looking at the forecasts.

This marks a big change in most of Nebraska and Kansas, which were in different levels of drought during the winter. Much above normal to even record amounts of moisture in rain and snow events in March helped limit drought in this area, which helped to either ease or remove drought, he said.

"We're coming into the time of year, which usually is the wettest time of year, so this added to what has already happened makes for a more promising outlook," Anderson said.

Jerry Volesky, University of Nebraska-Lincoln (UNL) Extension range and forage specialist located at the West Central Research and Extension Center in North Platte, Nebraska, said because of the moisture seen in late winter and early spring, most producers are "cautiously optimistic" about the upcoming forage growing season. The moisture in March and April certainly has done a lot to recharge the soil moisture, he said.

Most spring annual forages like oats, barley, spring triticale is probably already planted by now in central Nebraska, and because of this moisture, these forage crops are off to a good start, Volesky said. For cool-season forages, April and May precipitation is the most critical time and the region has seen some moisture.

Volesky pointed out the area does face some drought concerns still. Most, if not all, of the summer precipitation forecasts are still calling for below normal precipitation, he said.

"So, in a nutshell, I think what happens in May and June will tell the story as far as the forage situation and producers should have plans that cover different possible scenarios," Volesky said.

Kimberly Meier, a farmer from Ridott, Illinois, said the spring seeding of alfalfa in northern Illinois and southern Wisconsin came along at a fairly good rate. Thanks to cooperative spring weather, seeding happened and producers have had some moisture on new stands of alfalfa.

Winter in the area was fairly mild with some snow in January and February. Then really cold temperatures where present in mid-February, she said.

Meier, who also sells seed, said there is probably about the normal amount of alfalfa seeded in the region this spring. From driving in the area, the newly seeded alfalfa fields appear to be in good shape so far.

"We have had some moisture and mainly cooler temperatures this spring," Meier said. "It's another sweatshirt [day] today once again."

While hay supplies of the region are dwindling, Meier said she still has some hay leftover to sell. Historically, most of her hay customers have been dairies, although now she sells more hay to horse owners as well as both meat and dairy goat producers.

He saw cases of disease in his travels in parts of Minnesota.

"I tell people to apply a fungicide that is labeled for alfalfa," Jackson said. "You can see a quarter to half ton yield difference." 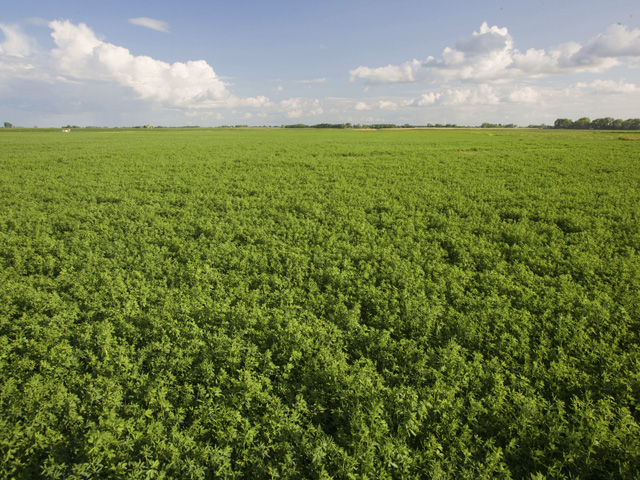