OMAHA (DTN) -- On his first day in office, President Joe Biden ended construction on the Keystone XL pipeline, and now 21 states have filed a new lawsuit, arguing the executive order was unconstitutional.

The lawsuit, which was filed Wednesday, is just the latest in a long series of legal fights TransCanada has faced since it originally proposed the $8 billion project in 2008.

Multiple reviews by the U.S. Department of State spanning two administrations have found the pipeline would pose little or no environmental harm, including no negative effects on climate.

Some farmers and ranchers have opposed the pipeline for fear a pipeline accident could harm sensitive lands and the Ogallala Aquifer in the Sandhills in Nebraska.

In a lawsuit filed in the U.S. District Court for the District of Southern Texas in Galveston, the states asked the court to declare the Biden executive order has no force of law.

"Revocation of the Keystone XL pipeline permit is a regulation of interstate and international commerce, which can only be accomplished as any other statute can: through the process of bicameralism and presentment," the states argue.

"The president lacks the power to enact his 'ambitious plan' to reshape the economy in defiance of Congress' unwillingness to do so."

In 2018, President Donald Trump's administration issued a presidential permit to build the pipeline as part of a release of a federal review, concluding the pipeline poses no significant threat to the environment, https://www.dtnpf.com/….

If built, the 1,700-mile pipeline is expected to carry about 830,000 barrels of oil per day from Alberta oil fields to Texas refineries.

In November 2018, a federal judge overturned the Trump administration permit and ordered a full environmental review of the project, https://www.dtnpf.com/….

"This administration continues to tout imaginary green-energy jobs, without any recognition that their actions in the real world will make it impossible for hard-working Americans to put food on the table," Texas Attorney General Ken Paxton said in a statement on Wednesday.

"Even under your supposed priorities, in total, 10,000 union jobs will be lost because of your executive order, as well as $500 million allocated for indigenous suppliers and a $10 million fund for green-jobs training," Hunter said in a Feb. 11, 2020, letter to Biden.

"It is my hope, and the hope of a great many elected officials and countless hard-working Americans, that you will reverse your position and allow construction of the Keystone XL pipeline to continue."

In the lawsuit, the states allege Biden's revocation of the permit violates the Constitution's separation of powers, arguing the action regulates international and interstate commerce. The states said only Congress has the power to do so.

"The president has certain prerogatives to act on behalf of the United States in foreign affairs," the lawsuit said.

"But as far as domestic law is concerned, the president must work with and abide by the limits set by Congress -- whether he likes them or not. This administration has sought to leverage its power regarding U.S. foreign policy to unilaterally contradict Congress' stated domestic policy regarding one of the most significant energy projects in a generation: the Keystone XL pipeline. This it may not do."

The lawsuit alleges Biden's action was a violation of law on six counts, including that it was arbitrary and capricious.

"Within hours of taking office, President Biden issued an executive order that purports to revoke the permit on the grounds that he has 'an ambitious plan' to 'reduce harmful emissions and create good clean-energy jobs' and that this completed pipeline would 'not be consistent with (his) administration's economic and climate imperatives,'" the lawsuit said.

"But it cites no statutory or other authorization permitting the president to change energy policy as set by Congress in this manner."

In addition, the lawsuit alleges a violation of the Administrative Procedure Act by not going through a notice and comment period before revoking the permit.

The states said the federal government has, "for years," studied the safety, environmental effects and economic benefits of Keystone XL.

"It repeatedly concluded that the pipeline would have a negligible impact on the climate but significant impact on the economy and American energy independence," the lawsuit said.

"The president lacks the power to enact his 'ambitious plan' to reshape the economy in defiance of Congress' unwillingness to do so. President Biden did not consult with the plaintiff states before making this decision, nor did he consider the far-reaching consequences his decision would impose on plaintiffs."

The states said counties, local communities and school districts stood to gain tens of millions of dollars in tax revenue through the construction and operation of the pipeline.

For example, the total estimated property tax from the project in the first full year of operations is estimated at about $55.6 million across 27 counties in Montana, South Dakota and Nebraska.

"Environmentally, canceling Keystone XL will also be counterproductive," the lawsuit said. "Hundreds of thousands of gallons of oil that would have flowed through the pipeline by operation of physics will now traverse the states' territories in trucks and trains. Trucks and trains must burn fuel to transport fuel. This will result not only in increased emissions but also higher wear-and-tear on the states' highway systems, and an increased risk of traffic accidents." 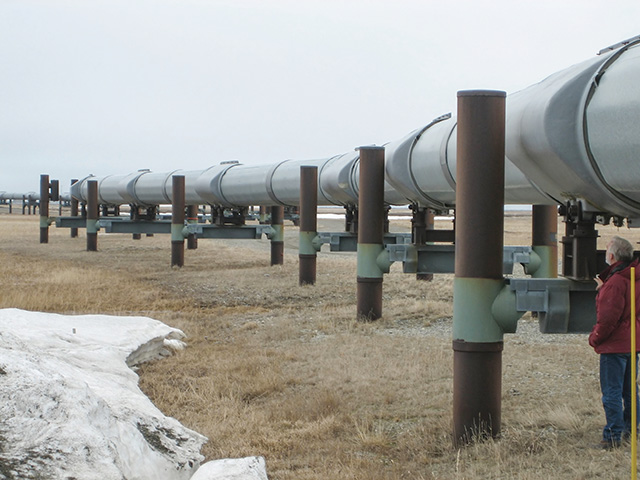