OMAHA (DTN) -- The Keystone XL pipeline project hit yet another snag, as a federal court in Montana on Thursday overturned President Donald Trump's administration's approval of a permit to build the pipeline.

The U.S. District Court for the District of Montana, Great Falls division, vacated the approval and remanded it back to the U.S. Department of State for a more-thorough environmental review that could take months to complete.

The latest action is just another in a long, winding legal battle that has spanned two presidential administrations, sparked protests across the Midwest from environmentalists and landowners, and was seemingly resolved when Trump granted a presidential permit.

"It was a political decision made by the judge," President Donald Trump said of the latest court ruling during a press gaggle ahead of an overseas trip on Friday morning. "I think it's a disgrace."

Environmental groups, farmers and ranchers fought TransCanada, the company that wants to build the pipeline, for years to stop construction of the planned 2,000-mile pipeline that would carry 830,000 barrels of bitumen oil per day from Alberta, Canada, to the Gulf of Mexico.

Opponents' concern was the pipeline would pass through sensitive habitats across the Nebraska Sandhills, and they feared any pipeline breaches could harm the environment. Also, TransCanada planned to use eminent domain with about 2% of landowners to acquire the land needed to build the pipeline, upsetting those who potentially would be affected.

Morris ordered the State Department to consider the effects of current oil prices on the viability of the pipeline, the "cumulative effects" of greenhouse gas emissions from the Alberta Clipper expansion and the Keystone pipeline, as well as updated modeling of potential oil spills and recommended mitigation measures, among other issues. The Alberta Clipper is another oil pipeline owned and operated by Enbridge that runs from Hardisty, Alberta, Canada, to Superior, Wisconsin.

"The department failed to comply with NEPA (National Environmental Policy Act) and the APA (Administrative Procedures Act) when it disregarded prior factual findings related to climate change and reversed course," Morris writes.

In addition, the court requires the State Department to consider potential adverse effects on endangered species from oil spills associated with Keystone "in light of the updated data on oil spills and leaks."

The court ordered TransCanada to not conduct work on the pipeline in South Dakota, Montana and Nebraska

The Montana court on Aug. 15, 2018, ordered additional analysis of the new pipeline route through Nebraska.

Mark Hefflinger, communications director for Bold Alliance, said in a statement the decision was a victory for property rights.

"This now 10-year battle is still far from over," he said. "We'll continue to stand together against this tar sands export pipeline that threatens property rights, water and climate at every opportunity, at every public hearing. People on the route deserve due process."

Trump signed an executive order on Jan. 25, 2017, clearing the way for the Keystone project. One day later, TransCanada filed a new application for a presidential permit with the State Department.

Although the State Department concluded in a study the pipeline would be safe for the environment, President Barack Obama's administration rejected a previous application for a presidential permit. That rejection led TransCanada to file a complaint using the North American Free Trade Agreement, or NAFTA.

"In the more than 10 years since Keystone XL was proposed, the pipeline has passed every environmental review conducted for it," Rorick said in a statement. "In fact, a total of six assessments by both the Obama and Trump administrations concluded that KXL is safe to build. Calls to conduct identical environmental reviews makes no sense and are a waste of tax dollars. A decade of Keystone delays needs to end now." 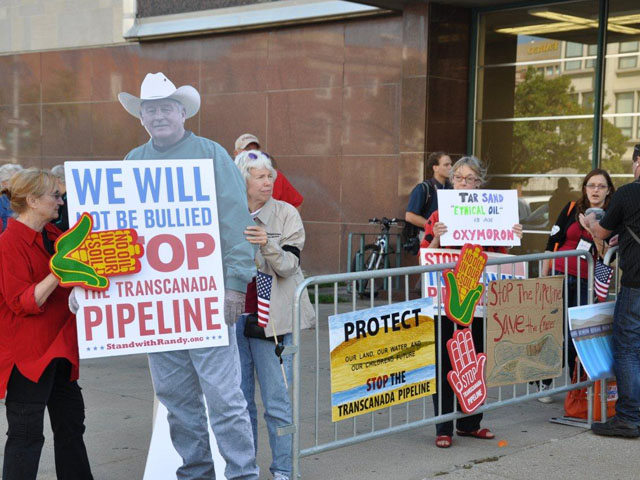