OMAHA (DTN) -- USDA or Congress must find a way to reward farmers who have been at the forefront of soil-health practices who might be the least able to sign up for a carbon credit program because of issues such as "additionality" when it comes to reducing greenhouse gas emissions.

The topic of additionality versus early adopters was raised repeatedly during a hearing before the Senate Agriculture Committee on Thursday as farmers who testified about carbon sequestration also stressed the importance that any climate program through USDA remain voluntary.

The Senate and House Agriculture Committees are trying to figure out where they fit in terms of forming policy to address climate change in agriculture. After neither committee had held a hearing on climate change, both committees have now held hearings repeating similar themes in just the past two weeks. At the same time, new leaders at USDA are working on their own initiatives that likely will lead to early action on some type of program to reward farmers for adopting more climate-smart cropping practices that lower emissions and sequester carbon in the soil.

And lawmakers are trying to assure farmers that the goal is to provide economic opportunities rather than government mandates.

"Whether it's a corn and soybean grower planting cover crops after harvest, or a dairy farmer installing solar panels on the roof of their barn, or a forester managing their land to grow more mature trees that hold more carbon -- these climate-smart steps are good for the planet and good for business," said Senate Agriculture Committee Chairwoman Debbie Stabenow, D-Mich.

ONE OF THE CHALLENGES

One of the early challenges coming up with carbon credits for farmers is corporations buying into such markets do not want to pay for past practices. They want to pay for additional emission reductions or carbon sinks that comes with farmers changing their practices -- which is known as additionality.

"Right now, everyone wants new carbon, and very few companies right now seem willing to pay for any sort of past performance, and there are huge risks with that model," said Idaho farmer and rancher Cori Wittman Stitt.

An adviser for the Environmental Defense Fund, Stitt told senators that she and her partners on an 18,000-acre farm and ranch near Lewiston, Idaho, are using no-till practices and more diverse crop rotations to reduce the reliance on chemicals and fertilizers. The farm is also experimenting with cover crops.

Federal policy is needed to encourage wider adoption of climate-smart practices, Stitt said, but there also needs to be a pathway to credit earlier adopters.

"We absolutely do not want to advertently penalize those that made early investments in climate-smart methods, or we risk farmers unwinding these good practices just to qualify for new markets," Stitt said.

Oklahoma rancher and conservationist Clay Pope, representing the National Farmers Union, also told senators there would have to be a way to recognize farmers who have been using no-till practices, cover crops and other tools to reduce soil erosion and improve water quality.

"There are thousands of producers who have worked for years to improve their lands, and it would be a horrible mistake not to provide opportunities for these pioneers," Pope said.

Illinois farmer John Reifsteck, chairman of GROWMARK Cooperative in Bloomington, Illinois, and representing the National Council of Farmer Cooperatives, has been working with the National Oceanic and Atmospheric Administration on his farm since 1996 to study climate. One of the nuggets of information out of that work is that his farm sequesters about 1,000 pounds of carbon per acre annually while conventional tillage releases about 2,000 pounds per acre, he said.

"There is a growing realization that, done correctly, policy that promotes climate-friendly practices can boost farm income, increase productivity and address one of the most pressing challenges the planet faces," Reifsteck told senators.

Reifsteck added, "If farmers are going to adopt new practices, they need to know how it's going to work and how it will improve the productivity and sustainability on their farms."

Farm income and productivity are frequently raised as possible concerns over farmers adopting more soil health practices. Earlier this week, the Soil Health Institute released a study of 100 farms across nine states looking at tillage practices, nutrient management, pest management and changes in yield. The study found that soil-health systems increased net income for 85% of the corn farmers in the study and 88% of the soybean farmers. The average costs to grow corn were reduced by $24 and reduced by $17 for soybeans. Overall, net farm income increased for corn farmers by $52 an acre and increased for soybean farmers by $45 an acre.

Stefanie Smallhouse, president of the Arizona Farm Bureau Federation, highlighted that agriculture in different parts of the country faces different impacts from climate variability. Arizona is in a "megadrought," she said, which has severely affected ranchers and forced herd reductions. Western states are also facing a dramatic increase in the intensity of wildfires and are in dire need of proactive forest management, she said.

Smallhouse also pointed to policy proposals from the Food and Agriculture Climate Alliance, a coalition of most of the organizations that testified before the Senate. The coalition stresses the importance of voluntary climate programs.

"Any policy that addresses proactive measures to influence climate conditions cannot be one size fits all," Smallhouse said.

Again highlighting Western water challenges, Smallhouse said policymakers need to "expand the scope through which we view climate policy to include other natural resources, especially water." The unprecedented drought in Western states threatens the sustainability of thousands of farmers and ranchers.

"Therefore, investment in water infrastructure is something that must be considered," Smallhouse said.

Mark Isbell, a farmer from England, Arkansas, representing USA Rice, told senators that, while agriculture can mitigate climate change, a viable market that provides a fair incentive remains elusive. Isbell noted he had been involved in an early carbon program that ended up paying him one check for $133.

"It didn't work out in our situation very well," Isbell said. "That doesn't mean that I don't remain hopeful that there are opportunities, but it tells me that we have to be more open-minded and what those opportunities look like. There's a difference that can be made with agriculture, that is clear."

Isbell also stressed that any new USDA program paying farmers for carbon should not take away from current conservation programs at USDA that already have more demand than funding. "In fact, Congress should increase investment in the existing suite of NRCS land programs," Isbell said.

Reiterating the theme that participation in a climate program must be voluntary, Isbell also said taking part in a carbon program should "never become a precondition for accessing other USDA programs."

There was bipartisan agreement among senators that any carbon programs would be voluntary. Sen. John Boozman, R-Ark., ranking member of the committee, said placing regulatory burdens on farmers tied to carbon emissions would risk further driving consolidation in the industry. Sen. Cory Booker, D-N.J., who just joined the committee, said he agreed that "any solution needs to be voluntary." Noting the demand for USDA conservation programs, he said increased investment in the existing programs "must be a top priority."

Sen. Roger Marshall, R-Kan., said he does not think carbon is a commodity, but asked the farmers their perspective. Again, concerns were raised that, as a carbon program develops, third-party vendors or verification inspectors would be the ones to end up reaping the reward.

"Like other commodities, we need to be careful about the share of that value that goes to the farmer, because what ends up happening when you commoditize things is the share of the actual farmer who's doing the bulk of the work gets smaller and smaller," Smallhouse said. 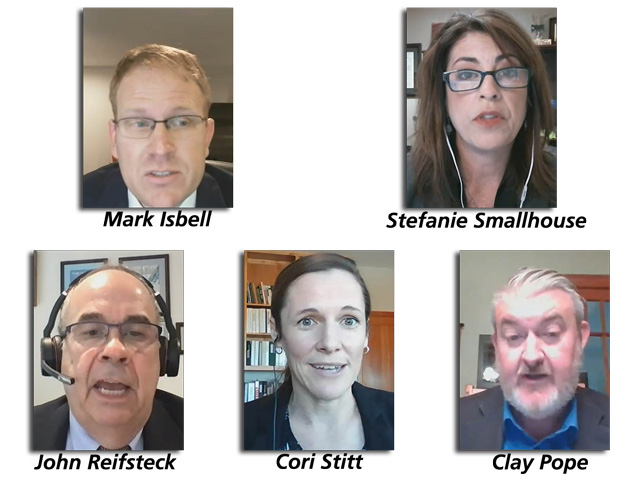