The U.S. House Agriculture Committee held a marathon online hearing Thursday, looking at climate change with a focus on the viability of using funds from the annual $30 billion provided to the Commodity Credit Corp (CCC) to develop a carbon bank. The hearing comes as the Biden administration seeks to aggressively engage federal departments, including USDA and its programs, to lower carbon emissions across the U.S. economy.

Jim Cantore, a meteorologist for the Weather Channel, cited 22 weather disasters last year that each topped $1 billion in damages -- totaling $95 billion in losses. He pointed to the derecho that swept across the Midwest in August.

"We saw one of the costliest, severe thunderstorms in U.S. history deliver a crushing blow to farmers," Cantore said, pointing out the storm swept across 10 million acres of corn and soybeans that in some areas were already stressed by extreme drought."

Discussing some adaptive solutions to climate change in the soils, North Dakota farmer and rancher Gabe Brown called on lawmakers to encourage more farmers to embrace regenerative farming practices. Brown said his operation near Bismarck, North Dakota, has been affected by extreme variability in weather.

While agriculture is often "vilified" as being a major contributor to climate change, Brown said the right practices to build healthy soils can sequester carbon. Through no-till and extensive use of cover crops, Brown said organic matter in his soils has gone from 1.7% in 1993 to nearly 7% now.

Regenerative practices reduce soil erosion, Brown said, but also lead to less use of synthetic fertilizer and pesticides. "And it's not just about emission reductions," Brown said. "It's about our land's resilience and ability to function. Regenerating our soil ecosystem is the most cost-effective national investment we can make to minimize and mitigate climate change and heal society. The current system is broken. We need to change the way we see things and regenerative agriculture is a win for all."

Brown repeatedly stressed the need for better support from USDA's Natural Resources Conservation Service to educate farmers on regenerative practices. No-till agriculture has been around since the 1960s, but Brown said only about one-quarter of crop acres are fully no-till today.

Cover crops are still on a small number of acres, overall. USDA just last week put 2017 cover crop acres at about 15.4 million acres. That would break down to just under 7% of the corn, soybean and wheat acres that will be planted this spring.

"It is an absolute tragedy we have such a small amount of our landscape covered with cover crops," Brown said. "I fly extensively and when you fly anywhere, the amount of bare soil we see is absolutely appalling."

Testimony largely praised U.S. farmers' overall stewardship practices and production. Michael Shellenberger, president of California-based Environmental Progress, pushed back on some "growing alarmism" in climate policy, pointing to the growth in U.S. crop yields and food production that have brought down extreme poverty globally and increased life expectancy. The U.S. has reduced soil erosion while increasing yields and increased per-pound meat production while reducing the number of livestock.

If every nation raised its productivity to the height of its most successful farmers, that would drive up global food yields more than 70%, Shellenberger said.

Zippy Duvall, president of the American Farm Bureau Federation, called on lawmakers to boost research and development to help farmers combat climate change. The U.S. is losing its competitive advantage in R&D, he said. "I am concerned if you look at the research dollars we are spending compared to the rest of the world," Duvall said.

Duvall said the new Agriculture Secretary Tom Vilsack assured him any funding for a carbon bank would not come out of traditional commodity programs.

Duvall also said the CCC fund still might not have enough borrowing authority to help create a carbon bank. AFBF supports raising that to $68 billion a year.

"The borrowing authority of CCC is not nearly high enough and we support raising that level to $68 billion," he said.

Rep. Dusty Johnson, R-S.D., was one of several GOP lawmakers who expressed doubts about a USDA carbon bank. Johnson said he understood transaction costs could be high. Under some analysis, just 10% of the revenue would go to producers, he said.

"I've got questions on impacts on land prices, impacts on market conditions, on private markets, on whether it should be performance based or outcome based," Johnson said, asking Duvall about his comfort level with a carbon bank.

AFBF co-chairs the Food and Agricultural Climate Alliance, which announced an expansion in membership this week. The group FACA has released more than 40 recommendations to the Biden administration to address agriculture and climate change.

Duvall said groups involved in the FACA coalition look forward to seeing a carbon bank. Still, Duvall said there were concerns about whether the opportunities would come to fruition or middlemen in agriculture would make the money.

"The fear that we get from the countryside from our farmers is, what does that really look like, and is it going to be valuable enough for me to actually make that commitment?" Duvall said. "How many regulations are going to be around it and who is really going to make money on it? Is it going to be an additional revenue stream to me on my farm and help me to be more assertive in doing more practices that are climate friendly? Or is somebody in the middle going to make all of that money?"

Duvall said he is not totally on board yet, "But I'm ready to have that conversation of what that looks like, and how we develop that market."

Rep. Jim McGovern, D-Mass., said getting to a net-zero emissions economy long-term may avoid more devastating extreme weather events that are forecast if temperature increases are not held to 1.5 C (about 3.7 F).

"Farmers are not the ones who got us into this mess," McGovern said, "but now they're on the frontlines of the climate crisis. We need to think big, to help them build resilience into everything that they do."

Brown also told lawmakers that one area in the climate debate and regenerative agriculture that needs more understanding is nutrient density of foods. Brown said more research is coming out showing foods grown by regenerative practices are more nutrient dense.

"I think that's been totally overlooked," Brown said. "We want to help the underserved, let's increase the nutrient density. The only way we can increase nutrient density of foods is through healthy soils on the land."

Biden's climate plan calls for a net-zero emissions economy by 2050, with agriculture helping lead the way. Similar policies are happening across Europe as well. Europe's largest farm organization, Copa Cogeca, on Wednesday expressed its support for an agricultural carbon market under the new EU Strategy on Adaptation to Climate Change, which includes a goal "to develop a certification mechanism for carbon removals."

Speaking to reporters on Thursday, Vilsack said the goal for USDA is to provide resources and technical assistance and set standards and certification and verify results from conservation practices. But he's open to exploring a carbon bank.

"To the point where we can potentially establish something like a carbon bank, I think we should absolutely explore it," Vilsack said. "And if there are resources available today that we have the ability to use them, then we ought to be looking at that."

Vilsack made it clear he sees the climate change issue in the context of broader agricultural problems. The country is faced not only with the climate issue, but also with the need to raise food for global food security, he said. "It is important from a soil health perspective to do what we can as quickly as we can to restore the health of our soil," he said.

The secretary also pointed to an "income imperative" for producers. He cited that nearly 90% of farmers make a majority of their income off the farm. "That is an economic imperative for us to look for additional ways in which we can help those who are producing what we consume in this country," he said. 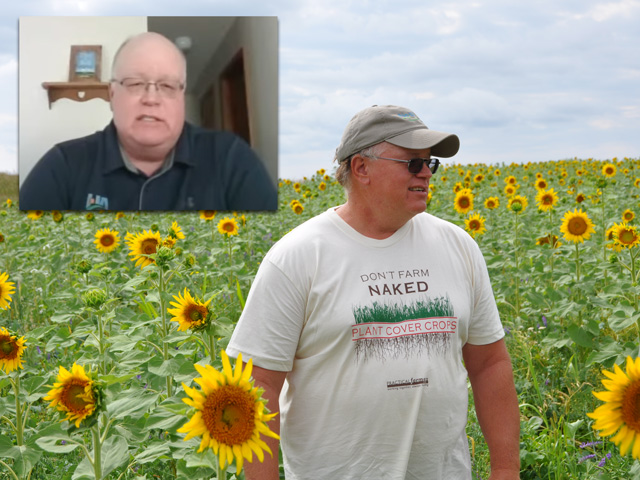