OMAHA (DTN) -- The Renewable Fuels Association on Tuesday sought to drive home the focus on lowering carbon emissions as the way to spur greater ethanol demand with actions by the Biden administration and Congress.

Seizing upon President Joe Biden's goal to reduce carbon emissions, Geoff Cooper, president and CEO of the Renewable Fuels Association, pointed to Biden's goals as a major opportunity for the biofuels industry.

He countered the push by some policymakers to sell only electric cars by 2035, arguing it's impractical to flip the U.S. vehicle fleet to all-electric. Instead, the U.S. could make more rapid gains in lowering emissions from transportation by "decarbonizing liquid fuels" through greater use of biofuels.

"You have an enormous opportunity to decarbonize (liquid) fuels," Cooper said. "Let's not waste it."

RFA is holding its National Ethanol Conference virtually this week. In a speech, Cooper laid out some policy moves that would lower emissions, such as reining in small-refinery exemptions for petroleum refiners. The Trump administration granted 85 such exemptions over time, which disrupted roughly 4 billion gallons of ethanol demand. EPA also could complete a rule to adjust E15 labeling and allow retailers to use existing underground storage tanks for 15% ethanol, Cooper said.

But a real driver for spurring higher ethanol demand would come from a low-carbon fuels standard -- ideally passed into law by Congress. Cooper noted the possibility of "catching lightning in a bottle" with a bill in Congress, but he acknowledged that would not be easy.

"We think there is an outside chance you could see an LCFS move legislatively in the next year or two," Cooper told reporters during a briefing. The Biden administration might also look at some form of executive action, but Cooper added, "A much safer, more secure route would be through legislation."

Cooper highlighted an industry-funded study showing the lifecycle of corn-based ethanol has 46% less carbon intensity than gasoline. There are also pathways showing cellulosic ethanol from corn kernel fiber can achieve as much as 80% lower emissions than gasoline.

"When you put E85 from ethanol into a flex-fuel vehicle, you've got a low-carbon transportation alternative," Cooper said. He added, "Mark my words, zero-carbon corn ethanol is coming."

Cooper said drawing down the benefits of higher biofuel blends and higher octane standards in liquid fuels would provide more benefits than policymakers arguing that electric vehicles "are the one and only solution for decarbonizing our fuel system."

MANDATES TO MOVE TO ELECTRIC

At least some lawmakers have introduced bills to mandate all vehicles sold by 2035 be electric. California Gov. Gavin Newsom has signed an executive order setting such a mandate in his state as well. General Motors followed suit with the automaker stating an "aspiration" to make all vehicles electric by 2035 as well.

"We absolutely believe electric vehicles will play an important role in reducing transportation-related greenhouse gas emissions in the coming decades," Cooper said, before adding that forecasts still show a high percentage of vehicles on the road in 2050 will use liquid fuel.

Pointing out Biden had championed flex-fuel vehicles when he was a senator, Cooper said RFA would like to see more than just 9% of vehicles on the road be built to handle ethanol blends beyond 15%. That will be a top priority for RFA going forward, he said.

Rep. Cheri Bustos, D-Ill., introduced a bill last year -- the Next Generations Fuels Act -- that would increase biofuels demand by promoting vehicles that consume higher blends of biofuels. Among the changes in her bill would be to raise the octane ratings for gasoline from 91 to 98, which would push retailers to sell more mid-level ethanol blends. Bustos' bill also provided incentives to farmers to use farming practices for ethanol or biodiesel feedstocks that focus on precision fertilizer applications and reducing emissions.

"Coupled with other sustainable farming practices, increasing ethanol use can be a key solution to our climate issue," Bustos said Tuesday.

On a virtual panel Tuesday, Cooper asked a climate policy expert at General Motors about the company's aspirations to become fully electric by 2035. Tom Van Heeke, a policy lead on climate change at GM, said a major reason GM executives are moving in that direction is the decline in battery costs for electrical vehicles during the past decade. He acknowledged electrical vehicles still need infrastructure incentives, and consumers will demand more biofuels as well.

"If we can reduce the carbon intensity of those fuels that deliver the climate benefit, those are tons we don't have to find somewhere else," Van Heeke said. "So GM still cares about fuels, and we think that ethanol -- indeed all low and ultimately, hopefully, synthetic net-zero emission liquid fuels -- those can have a role in the future and LCFS (low-carbon fuel standard) policies, for example, can help build that future."

Cooper later noted to reporters that RFA has a disagreement with GM on what the future of light-duty vehicles will look like. At one point, GM had championed 50% flex-fuel vehicle sales, but that did not happen.

In trying to get a low-carbon fuels standard, Rob Larew, president of National Farmers Union, said climate action can often get bogged down in a lot of talk and paperwork, but little action. Bipartisan legislation may be a challenge at this point.

"We haven't seen any evidence yet of renewed bipartisanship here, and I'm going to step out and say I'm not sure that we have to have true bipartisanship to get something done here," Larew said, adding that biofuel advocates need to be focused and build a broad coalition of stakeholders to try to achieve such legislation going forward.

Ethanol producers are coming off a low 2020 in which fuel demand was dramatically slowed because of the coronavirus pandemic. Ethanol output last year was 13.8 billion gallons, the lowest since 2013, but it still comprised nearly 10.2% of liquid fuel sales. Exports last year amounted to 1.33 billion gallons, the fourth-highest year for foreign sales.

Short term, Cooper said the winter storm that has led to power shutdowns right now is affecting producers across the Midwest. Ethanol plants have been hit by natural gas shortages and rolling electrical blackouts, especially in Kansas and Nebraska. "Every plant we have talked to in the Midwest in the last several days has been affected in some fashion," he said. 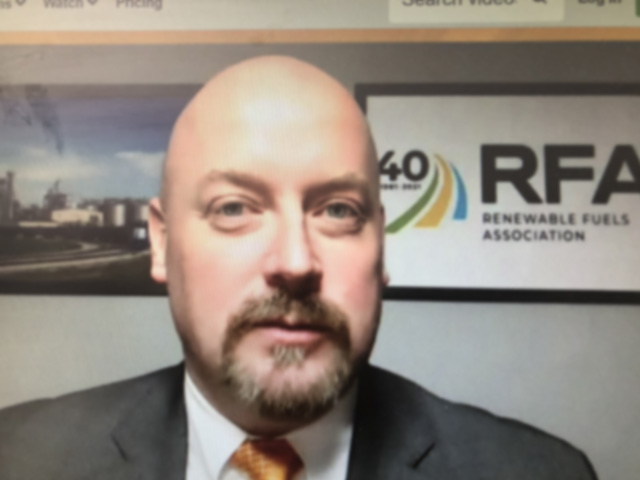