DES MOINES (DTN) -- Leaders at the U.S. Custom Harvesters Inc. annual meeting late last week felt confident they would have an easier time this year bringing in foreign guest workers than they did in 2020. But, on Monday, President Joe Biden banned foreign travelers from South Africa and reinstated travel bans from 26 European countries, Brazil and the United Kingdom.

Both South Africa and the United Kingdom have new variants of COVID-19 considered to be more infectious than the more widespread version of the virus. The UK variant has been detected in the U.S., but the South African variant has not been found in the U.S. so far.

"With the pandemic worsening and more contagious variants spreading, this isn't the time to be lifting restrictions on international travel," White House Press Secretary Jen Psaki said in a briefing Monday.

The ban issued by the White House applies to most non-U.S. citizens traveling from South Africa, Brazil, Europe, the United Kingdom and Ireland. Those also happen to be countries from which custom harvesters in the U.S. recruit seasonal guest workers to run combines and drive trucks from spring through fall.

The travel ban comes just days after board members of U.S. Custom Harvesters Inc. told DTN at their annual meeting in Des Moines they felt more confident about guest workers going into the hiring season than they did a year ago. But there also remained some skepticism about the potential rules.

Paul Paplow of Ocheyedan, Iowa, has focused more heavily on hiring American workers, but it's a tight labor pool. So custom harvesters typically turn to the H-2A guest worker program for their labor needs.

"Everyone's waiting for their foreign labor to show up, just like last year," Paplow said. "We're all trying to hire from the same little pool that we have, so it puts everybody in a bind. We're talking to different agents and whatnot, and everybody feels the H-2A workers will be here from South Africa and Mexico, but the U.K. and Ireland are shut down right now."

At least one H-2A recruiting agency at the Custom Harvesters meeting had felt confident that recruits from South Africa would be allowed to travel after they took a test for COVID-19. That was before Monday's new order.

"That'll directly affect me and a lot of other harvesters if the English remain in a lockdown and can't travel," he said. "There are several crews that would fill out a large part of their crew with English people."

Overall, custom-harvest crews make up just a small percentage of H-2A employers and employees. Of the 275,430 H-2A positions filled last year, equipment operators accounted for 15,326 jobs, or about 5.6% of the total H-2A workforce.

Last year, coronavirus shutdowns hit just as most custom harvesters were gearing up to bring their crews in for the winter wheat harvest. Haffner said his company, which has 20 visas, got caught in the middle of it, and some workers did not make it back.

"It was really tricky because some of those guys have been with us for quite some time," he said. "And we needed to fill out our crew, but we were still hoping we could get them in. We did eventually, but it was a little bit late."

Initially, last March, the State Department shut down most U.S. consulate offices, then changed course to allow H-2A workers from Mexico. Eventually, officials changed course again to allow guest workers from other countries. The problem then became one of getting them out of their own country. South Africa, for example, had rules against crossing state borders. Europe placed stricter controls than that on movement.

The big challenge last year was getting flights for workers even if their countries had cleared them to leave and the U.S. had cleared them to enter the country. Commercial airlines were not operating, so a lot of organizations got their workers into the U.S. on charter flights, which "was like moving mountains," Haffner said.

"So, it was very difficult for workers to get out," Haffner said. "A lot of Europeans weren't allowed to travel, and we were going to hire some of those."

Haffner said most custom harvesters try to fill out a crew with American employees, but they often have to turn to foreign labor. For his own operation, Haffner said he has hired people from several countries in recent years and enjoys the mix of people from different cultures working together on a crew.

"They're a pretty steady, good workforce that we can plan on," Haffner said. "Each region seems like their people come with different strengths, and then it can be tricky to integrate it. But, in our case, we feel like if we can successfully integrate them, then we're able to make an even stronger team, and that includes Americans too."

Paplow, who runs his harvest crew with his father from Minnesota, said his company tried to shift away from reliance on foreign workers largely by recruiting harvesters from two-year colleges and agricultural schools.

"A lot of farm kids are going for a two-year degree, and they want to come on and harvest for a season," Paplow said. "They will get some experience for a year, and then they'll go back to the family farm. So, we've been lucky that we've hit that recruiting spot with that niche, and it's worked well for us."

Like a lot of agricultural employers, Haffner said there is a need for year-round visas because the nine-month seasonality of H-2A workers is a problem as well.

"Last year, we had to send them home and then hope we can get them back," he said. 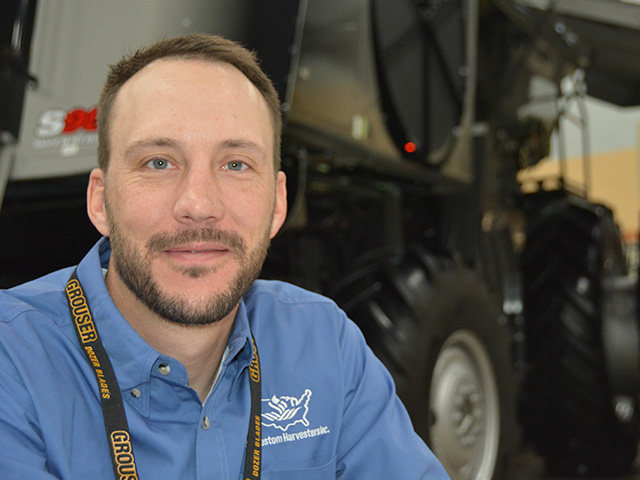