OMAHA (DTN) -- The power of data is in the pooling. That was the underlying theme of a panel discussion by three scientists who recently talked about their efforts to apply data in various ways to create real-world answers for farmers and others in agriculture.

The three-person panel was part of this year's DTN Ag Summit, which took place virtually Dec. 7-9. Those who registered for the Summit can access sessions until Jan. 8; anyone can register up to that date if they missed the event live.

The panel featured Jyoti Shankar, principal data scientist with Indigo Ag; James Heneghan, senior vice president for Gro Intelligence; and John Mewes, chief scientist for DTN's Clear Ag unit. Each of the panelists expressed empathy for growers who have been hearing about the benefits of using large amounts of data to make better decisions on the farm yet haven't seen a lot of concrete examples of that benefit.

Shankar and Heneghan spoke to the power of pooled data, of information gathered from farms across the United States that drive real decisions. In Shankar's case, Indigo is working with some 30 rice farmers in Arkansas to document the carbon footprint reduction of a handful of sustainable practices, which earned those growers a specific contract with Anheuser-Busch for a series of lagers the company will market.

"We're looking into how we help farmers harness nature to sustainably feed this planet," Shankar said of her company's larger goals. "In this case, it's beer, but we have lot of collaborations with large organizations that are trying to hit sustainability goals."

She said the rice farmers in the Arkansas Delta were very plugged in to what good stewardship practices are and they understand, in theory, what those practices do in terms of the environment and production. The challenge, she said, is the practices are not easy to do.

"Turning irrigation wells off at specific points in the season, using crop dry down techniques so that methane emissions are reduced, they all take time, effort and energy from each farmer to perform at the right time," Shankar said. "The challenging part is helping them understand the returns to doing such an intensive farming practice. While it might not seem as a challenging thing on the surface, it's not a tiny effort," and farmers need to be adequately compensated for the effort.

While there is success in specific projects such as lining up 15,000 acres of rice for a specific type of beer, Shankar said there is a larger challenge.

Getting other companies and grain buyers to recognize all that goes into growing rice differently and rewarding farmers for that is really the bigger challenge, she explained.

"How do we get the entire Arkansas region farming sustainably, believing in what they do and also getting paid the premiums," they need, and not just by one company, she stressed.

Heneghan discussed how Gro is using a wide range of data sources, from satellite imagery to current and historical weather patterns, to predict crop yields in real time through the growing season. Gro has been part of the DTN/Progressive Farmer Digital Yield Tour, which takes place in August.

The struggle, for companies such as Gro that use artificial intelligence and crop models to predict yields, is to prove their mettle against standards such as USDA and its long-standing crop reporting systems.

"The satellite yield models that are out there are quite good, especially in the U.S. for spring row crops," Heneghan said. Current models are showing error rates of 4% or less in August that narrow down to even 1% in November, compared with actual season-end numbers that are typically revealed by USDA in January and February.

Those models are increasingly being used by individuals and companies throughout the grain supply system -- from farmers to elevators to processors, food companies to commodity traders and speculators -- to make better decisions sooner. "Sooner" is always the goal.

Getting those accurate yield predictions "out a few months ahead of when the government has their estimates is valuable," Heneghan said. "The big trick is how do you move that (yield accuracy) and it's not August, it's now July. It's not that simple," Heneghan said. He noted there could be wide differences in soils and plant growth characteristics at the local level, then add in climate surprises such as 2019 floods and the derecho of 2020.

The critical part is to amass the data at that local level, said Mewes. As both a data scientist and a farmer, Mewes knows both sides of the data-sharing issue.

"As a farmer we've made some pretty significant investments in tech and in equipment in both being able to hopefully capture data but then to turn that data around to improve our operation," Mewes said. "We feel the pain of keeping that technology working, and also feel the frustration of being able to turn that data around to the benefit of the operation."

As a scientist, Mewes also sees the potential of what's going on in specific fields, but even more so the power of pooling data from across many farms.

"At the same time, as an industry we have to continue to work toward standards and tools that make it easier to share this data."

The sticking point in that sharing is that field data, by its very nature, is difficult to make anonymous. "Environment matters, field characteristics matter, the weather the field was exposed to matters. But as a scientist, there is so much potential in this data, but (the value) can only be unlocked when it's viewed en masse," Mewes said. "We also need to refine the ground rules around how those data can be used and enforcing those ground rules."

The full panel discussion, along with all other DTN Ag Summit content, can be accessed through Jan. 8 by registering at www.dtn.com/agsummit20

Registrants can also still participate in engagement activities that earn points toward a number of prizes, including free registration to the 2021 DTN Summit, planned for Dec. 6-8 in Chicago. 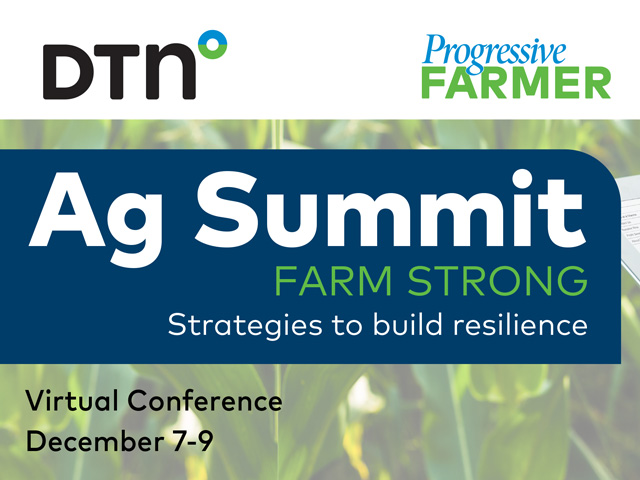