OMAHA (DTN) -- Telling Iowans he has delivered for them on direct farm aid, trade and ethanol, President Donald Trump told a crowd in Des Moines on Wednesday that some farmers are making more money under his aid programs than they would selling their crops. He also warned of an economic collapse if his rival, Democrat Joe Biden, is elected.

Trump spoke before an estimated crowd of 10,000 people at the Des Moines Airport, reflecting his campaign style under the pandemic of pulling Air Force One right up to the crowd and walking directly on stage to speak.

Iowa and other Midwest states are in the middle of surging COVID-19 positive cases. New cases have frequently topped 1,200 a day in Iowa since early September. The state has had 102,824 positive cases and 1,498 deaths. Polk County, where Des Moines is located, has had more than 17,500 COVID-19 cases, nearly three times more positive cases than any other county in the state. Critics of the president rented a digital billboard nearby that said "Trump COVID Superspreader Event," with an arrow pointing in the rally's direction.

A new poll released Wednesday of voters in Iowa, Minnesota and Wisconsin showed Trump trailing in Wisconsin (43% to 53%) and Minnesota (41% to 52%), but leading in Iowa 50% to 44%. The poll by RG Strategies was conducted for Focus on Rural America, a group led by Iowa Democrats that began in 2017 after Trump dominated in the rural areas of the Midwest. The poll had a survey size of 200 voters in each state and an error rate of 6.9%.

Patty Judge, Iowa's former state agriculture secretary, spearheaded Focus on Rural America. She said Wednesday that Democrats have made a far more concerted effort to address rural issues than in 2016, and it's made the upper Midwest states more competitive. Judge said rural groups have had more in-depth conversations with Biden and Sen. Kamala Harris as a result.

"And I think those efforts that we put forth, as well as the efforts of a few other groups, have made a real difference and have for the first time in a long time," Judge said. "The issues in rural America are a part of the election campaign. We hear that in the debates, both presidential, the U.S. Senate, the congressional debates. People are talking about rural America and quite truthfully, that really pleases me."

Three of the last five major polls in Iowa show the race is dead-even, according to FiveThirtyEight.com, which collects data on the various polls and also analyzes their polling accuracy. FiveThirtyEight actually shows Biden with a slight lead within the margin of error.

Trump lost Minnesota by 1.5% in 2016 and most polls show him trailing there again. Trump won Wisconsin by fewer than 23,000 votes in 2016, or less than 1%, but FiveThirtyEight shows him trailing by closer to 7% in most polls now.

In Iowa on Wednesday, Trump pointed to the Democratic poll of 200 voters showing he's up 6% in the state but complained he should be higher. Trump won Iowa by 9 percentage points in 2016.

"Nobody has ever done for Iowa and the farm belt and the farmers and all. No more estate taxes. No more anything. I saved ethanol. Ethanol is saved. For me to only be up 6(%), I'm a little bit concerned. I'll tell you that. Nobody's going to do for Iowa what I did for Iowa," Trump said.

In the midst of comments about Hunter Biden, former President Obama, Supreme Court nominee Amy Coney Barrett and his own bout with the coronavirus, Trump frequently returned back to themes of farmers and trade. Trump revisited his trade battles, saying when China targeted farmers and ranchers, "I put a 25% tariff on everything."

The tariffs, he said, were high and he took the money and gave it to farmers. USDA tapped the Commodity Credit Corp. to provide $28 billion in Market Facilitation Program payments to farmers in 2018 and 2019. Trump said he told Secretary of State Sonny Perdue to pay the aid to farmers.

Trump said that early in the tariff strategy farmers, "many from Iowa," came to talk to him. Trump said he told them he was going to provide farmers with a lot of money in subsidies, but the farmers pushed back and said they did not want subsidies. "All we want is a level playing field. We don't want anything. That's all we want," Trump said to a roaring crowd. "It's true. I never heard that. Most people, they don't care if we call it a subsidy, just give me the cash, give me the money ... The farmers are unbelievable -- the heart of this nation. They said they don't want a subsidy, and I'll never forget it."

Trump said ethanol was being killed before he came into office, although the EPA under his administration had approved billions of gallons of small refinery exemptions until a federal appeals court earlier this year slowed down EPA's exemption approvals. The president added that Biden has vowed to abolish fossil fuels, though Biden has declined to ban fracking.

"The Biden-Harris platform will demolish Iowa ethanol, you know, wiping out that entire industry," Trump said. "And we fought hard for it. You know, we went through the whole thing where we had no demand because of the pandemic. And we fought hard to keep it going and to keep ethanol going."

Trump touted his signature decision in 2019 to expand 15% ethanol to 12 months a year. Trump also pointed out his administration is now spending money on blender pumps for ethanol. Perdue came to Iowa and Minnesota last week to announce funding for blender pumps and storage tanks at fuel stations for E15. "Because, you know, with the additional ethanol -- the additional power -- some people say make them buy new pumps. No, I don't want you to buy new pumps if you don't have to."

Later, in attacking Biden again, Trump said his challenger would triple or quadruple taxes, which would lead to a depression. "And one thing we learned about the farmers, they don't do well in depressions. Do we agree?"

Due to the trade disputes and the coronavirus, the Commodity Credit Corp., which was created during the Great Depression, has been used to spend nearly $50 billion since 2018. USDA's farm income forecasts projected before the latest round of coronavirus aid that federal programs would make up roughly 38% of net farm income for 2020.

Biden's campaign released a statement on the president's trip and pointed to the nearly 100,000 coronavirus cases in the state. Biden said Trump didn't come to Iowa to aid people who have lost their jobs or otherwise been affected by the pandemic.

"Iowans whose lives have been thrown into chaos need real leadership -- not more division," Biden said. "I've seen our country through dark times before, helping rescue an economy in crisis. And I've fought for the health care protections this administration is battling in the U.S. Supreme Court to undo. We're better than this moment under President Trump -- and as president, I will bring this country together so that we can build back better."

Trump repeated that grain sales are booming under his trade policies, pointing to "the largest order of corn in the history of our country -- two weeks ago." Two separate corn sales to China in July each broke into the five largest corn export sales in U.S. history, according to the Foreign Agricultural Service, but did not make the largest single sale.

He added, "You had the largest order of soybeans in the history of our country, and the largest order of beef. But you know why, because China wants to keep me happy, that's why." July had high soybean sales for the 2020-21 crop that were double the 10-year average for July sales. Beef sales to China through August were up 113% to $93.9 million, but offset by lower sales to Hong Kong for the first eight months of the year. 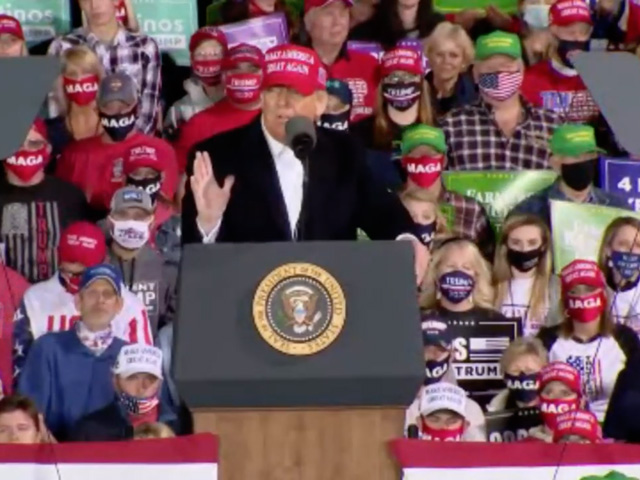