MASON CITY, Iowa (DTN) -- U.S. Secretary of Agriculture Sonny Perdue promoted biofuels and USDA's investment in projects such as blender pumps during a series of events in Iowa and Minnesota on Thursday.

The official purpose of the events at an ethanol plant in Mason City and fuel stations in Albert Lea, Minnesota, and Ankeny, Iowa, was to highlight $22 million in grants released by USDA in 14 states under the Higher Blends Infrastructure Incentive Program. The grants are among the first of up to $100 million the program will spend on projects such as helping fuel stations offset the costs of blender pumps and underground fuel tanks.

Among the investment goals is to spur fuel stations to expand the marketing of 15% ethanol blends across the country. USDA stated the $22 million released this week would increase ethanol demand by nearly 150 million gallons annually.

Dave Sovereign, a farmer from Cresco, Iowa, and chairman of the Golden Grain Energy Board, said he and others involved with the ethanol plant got to spend some time with Perdue talking about some ethanol industry challenges. They stressed that COVID-19, and the loss of fuel demand earlier this year, had a significant impact on the economy and travel. One of the needs for the ethanol industry to just get people traveling in their cars again. The grants for blender pumps, fuel storage tanks and the like will build some long-term growth for biofuels, Sovereign said.

"That's a nice step for the growth of our industry long term, and we really appreciate what that will do for our sustainability in the future," Sovereign said.

But it was hard to ignore the agriculture secretary coming to a pair of battleground states to promote biofuels with corn grower groups weeks before Election Day. Polling in Minnesota has consistently favored Democrat Joe Biden over President Donald Trump by at least 5%, according to a recent fivethirtyeight.com (www.fivethirtyeight.com) forecast. Iowa is a slightly closer race, but polling favors the president over Biden.

Sen. Chuck Grassley, R-Iowa, plugged both President Trump and fellow Republican Sen. Joni Ernst of Iowa, who also is in a close race to maintain her seat. Grassley noted of the president that he has been "So supportive of ethanol over a long period of time throughout this entire term." Grassley added that Perdue being in Iowa also reflects that "He's been a strong supporter of ethanol. And I think his being here today backs that up."

Grassley added that ethanol is "being politicized," specifically in the U.S. Senate race against Ernst. Having backed EPA Administrator Andrew Wheeler's confirmation, Ernst has been attacked in the Senate campaign for "being a tool of big oil," Grassley said. He pushed back on any suggestion Ernst is not a major advocate for biofuels.

"Can you imagine how abnormal it is? For organizations that are environmentalists say it used to be for ethanol now tend to be against ethanol and lobbying and saying that Joni Ernst isn't for ethanol. It's just a crime of power," Grassley said. "It's a political crime. But they're going to probably get away with it. But they aren't going to defeat Joni Ernst, because the farmers of Iowa and the ethanol industry of Iowa knows how hard she's worked for Iowa, agriculture and the ethanol industry."

Despite the campaign rhetoric, Perdue said his visits to Iowa did not amount to stumping for the president. Perdue pushed back on any suggestion of politics, saying he's repeatedly been to Iowa throughout his tenure as secretary, most recently on a visit to central Iowa a month ago.

"This isn't my first trip out," Perdue said. "We're getting around. I go to agricultural areas where our constituency is so USDA can know what we're doing right, what we're doing wrong, what we need to do more of, what we need to do less of, and that's why I'm out here throughout farm country. When you want to come to farm country, you come to Iowa and you come to Minnesota."

Perdue added he was headed to Pennsylvania and Maryland soon for his job as well.

Still, the Iowa Democratic Party and farmers opposing Trump held a press conference before Perdue's visit, claiming the secretary's visit was a late ploy to try to make up for some of the demand issues EPA had created with biofuels in recent years through small-refinery exemptions of the Renewable Fuel Standard.

Grassley dismissed any criticism of the secretary for holding events in Iowa right now.

"He's out here because he wants to listen to farmers, and when you go to the ethanol plant, you're listening to farmers and the ethanol industry," he said. "There's no way that our Secretary Perdue can be charged of coming to a particular state for political reasons."

Also in Mason City was Geoff Cooper, president and CEO of the Renewable Fuels Association. Cooper said the ethanol industry is still recovering from a 50% collapse in demand early in the pandemic and, right now, ethanol use is down about 10% year over year. So, a lot of facilities are still shut down or idled because of that lower usage, he said.

"It's been an incredibly difficult year financially for the industry," Cooper said. "And so, yeah, this comes at a good time; it is a nice shot in the arm and provides some optimism about the future and growth in the industry."

The ethanol industry also continues waiting on EPA decisions. There are still 17 "gap year" small-refinery waiver requests from 2018 and earlier that EPA has not ruled on. Then there are another 31 pending petitions by refiners for 2019 exemptions that EPA has not decided, along with a couple of requests already for 2020.

"We haven't received word yet from EPA on the fat of those petitions," Cooper said. "We just need EPA and this administration to adopt the 10th Circuit Court decision from all the way back in January, and that would finally put an end to these exemptions."

At a time when Iowa is suffering from damaged grain storage, Golden Grain Energy also announced it will soon house the world's largest grain bin. Sukup Manufacturing will build a 156-foot-tall, 165-foot-diameter grain bin at Golden Grain that will hold 2.2 million bushels of corn once completed. The Des Moines Register reported Sukup had also built the next-largest free-standing grain bin, so it would go larger with this one.

Sovereign said the ethanol plant did a survey last spring that showed the plant had a lack of storage capacity. The plant wants more capacity to allow it to keep running during winter months and other times when bad weather might put a crunch on grain deliveries.

"We are trying to have at least a 20-day supply on hand -- that's what we're aiming for here to help us work through those short-grain times," he said. "Then there are different times of the year when farmers just plain want to move grain and wait until it's more convenient -- like when they're not in a combine on days like today."

USDA's grants went beyond Iowa and Minnesota to include projects in California, Florida, Illinois, Indiana, Kansas, Kentucky, Missouri, Nebraska, New York, Ohio, Utah and Wisconsin. Most of the grants involve paying for new storage tanks at fuel stations or blender pumps that will sell 15% ethanol blends.

USDA stated it plans on announcing the remaining projects in the coming weeks for the Higher Blends Infrastructure Incentive Program. 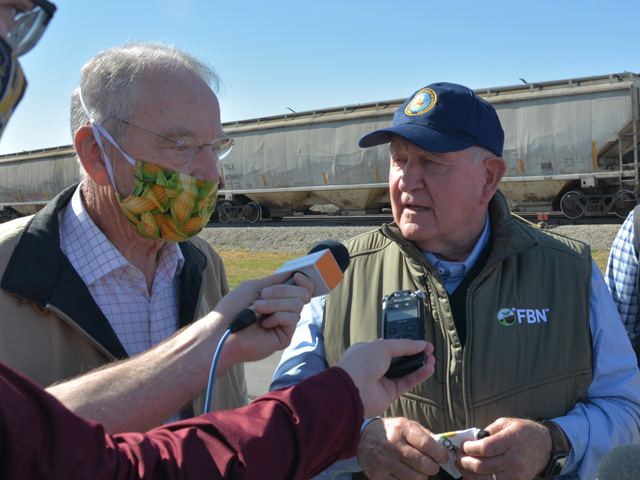