OMAHA (DTN) -- Western Lake Erie is expected to have a more moderate algae bloom this summer after a drier spring in the region, the National Oceanic and Atmospheric Administration, or NOAA, announced in its forecast on Thursday.

A toxic algae bloom in Lake Erie in August 2014 contaminated Toledo drinking water supplies. About 500,000 residents were warned not to drink water during a three-day period. Questions were raised about the cause of the bloom, and the finger was pointed at nutrient runoff from farms as a culprit.

Following a series of lawsuits, the state of Ohio launched a voluntary nutrient-reduction strategy.

NOAA officials said during a webinar on Thursday this year's bloom is expected to measure 4.5 on the severity index -- which would make it one of the smaller blooms since 2011. NOAA said the bloom could range between 4 and 5.5, compared to 7.3 last year. A measure above 5 indicates a more severe bloom.

The blooms may result in higher costs for cities and local governments that need to treat drinking water, as well as lost revenue as a result of preventing recreation along the Lake Erie shoreline. These effects will vary in location and severity because winds may concentrate or dissipate the bloom.

"Nutrient management efforts will take time to have an effect on the runoff and bloom size," she said. "It is a long-term effect."

Johnson leads ongoing monitoring efforts of the Maumee River that runs through Toledo and drains into Lake Erie. Streamflow discharges are around average compared to 2002 and 2018, she said.

In recent weeks, the city of Toledo has seen a bloom develop on the Maumee River in downtown.

Rick Stumpf, oceanographer for NOAA's National Centers for Coastal Ocean Science, said the bloom has developed because water levels in Lake Erie are at high enough levels to prevent the flow of the river from entering.

The Ohio Farm Bureau released a report this week, coinciding with the NOAA forecast, showing the efforts made to expand conservation in the state.

In 2019, H2Ohio received about 2,000 applications from farmers to access state funding to adopt nutrient management practices, amounting to 1.1 million acres. Fourteen counties in the Maumee River watershed are eligible to participate in the program.

Through a certification process, H2Ohio provides economic incentives to farmers who develop nutrient management plans that use a combination of the best practices.

As part of the H2Ohio plan, counties in the Maumee River watershed will have localized phosphorus targets to help ensure accountability. Data collected from farmers is aggregated and made publicly available.

The state of Iowa in recent years implemented a voluntary nutrient reduction strategy. The plan was widely criticized by environmental interests that wanted the state to mandate conservation practices.

In February 2019, Toledo voters approved a so-called Lake Erie "bill of rights" that empowers Toledo citizens to file lawsuits on behalf of the lake, potentially threatening farmers who operate in states bordering the lake, as well as in Canada. 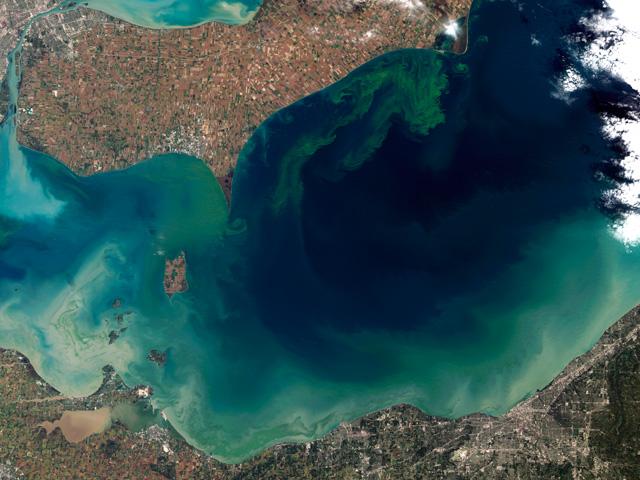