SAVANNAH, Ga. (DTN) -- A strong rebound in global fertilizer demand in 2020 is expected with more acres planted in the United States, according to a fertilizer analyst. Despite this positive outlook, there are some risks from across the world that threaten to alter this forecast.

Rajiv Ram, senior analyst of agriculture and fertilizer demand for CRU Int. Ltd., said during the global fertilizer demand outlook at the 2019 Fertilizer Outlook and Technology Conference held in mid-November in Savannah, Georgia, that 2019 had several challenges to demand from uncooperative weather to trade disputes. However, the demand prospects for 2020 look to improve.

Ram said the global fertilizer demand number will be right around 200 mmt for 2019. No growth was seen because of two main reasons, he said.

The first reason is due to fewer planted acres in the U.S. in 2019 because of the extremely wet weather. Fewer acres planted led to fewer acres needing fertilizer applications.

"There are several factors of why there is weakness in China," Ram said. "Unsupportive crop market fundamentals, falling application rates, increasing farm size and efficiency and changing fertilizer practice are all reasons for less Chinese demand."

China's fertilizer demand is evolving rapidly as falling nutrient demand is being seen on crops, but is being offset by increased applications on fruit and vegetable area. Overall, Chinese nitrogen and phosphate demand is falling and is forecast to continue to fall in the future, but potash use is rising, he said.

Ram said looking ahead to 2020, the global fertilizer demand outlook appears to be better, led by a strong rebound in U.S. fertilizer applications.

One reason for the expected U.S. rebound in fertilizer demand in 2020 is fertilizer affordability indexes (an index of fertilizer and crop prices) are very favorable right now. DAP has never been more affordable, while urea is becoming more affordable along with ammonia and potash, he said.

Ram said another positive situation in global fertilizer demand is India's increasing use of urea fertilizers. While sales of DAP and potash were down, comparing the January-to-October period in 2018 to the same period in 2019, the sales number for urea increased 12%, he said.

"Key developments include greater efforts to streamline the fertilizer sector in recent years, it was an election year, and a late-season monsoon helped to boost the Rabi season," he said. "India's love affair with urea shows no signs of stopping."

Ram said there are some issues that threaten to cloud the bright fertilizer demand picture.

An economic slowdown is a downside risk for U.S. fertilizer demand. Changes to economic growth affect nutrient demand as the last major recession in 2008 and 2009 pulled down the global nutrient demand, he said.

The other issue worth watching would be what happens with the U.S.-China trade war. One interesting aspect of the dispute is it has bolstered Brazilian fertilizer demand, he said.

With China purchasing more soybeans from Brazil, this caused a premium on the world market for Brazilian soybeans, Ram said. The Brazilian cropping areas continue to increase, a feature that was present before the trade dispute, but a number that is only set to increase.

The long-term outlook (2024 to 2042) calls for increased efficiency measures in some regions. This might be slight lower usage in North America, Western Europe and Eastern Asia, but it will most likely be offset by rising fertilizer demand in other regions, such as in Eastern Europe, South America and Africa.

Ram said these long-term changes will mean changes in market shares in the future. 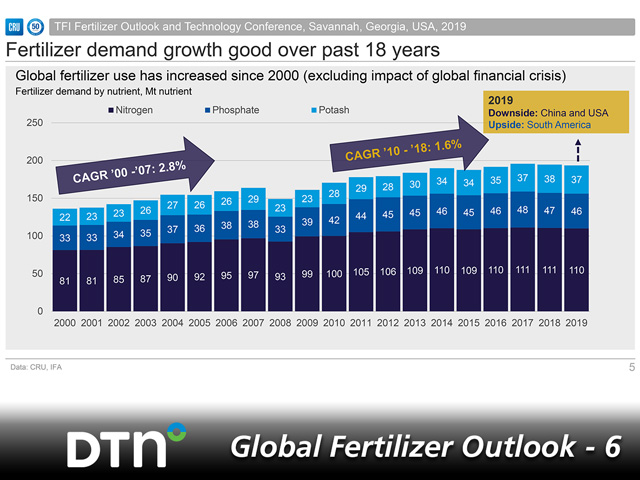