SAVANNAH, Ga. (DTN) -- Much like other fertilizer outlooks, the global sulfur (S) market appears to be balanced heading into 2020; however, there are some issues the market will need to work through for this to come to fruition.

Fiona Boyd, director of Houston-based Acuity Commodities, covered the sulfur outlook at the 2019 Fertilizer Outlook and Technology Conference in Savannah, Georgia, in mid-November. The outlook looked fairly positive, but there were some major issues facing the industry.

The global supply and demand of S appears well balanced with both sides of the market steadily increasing.

Boyd said there are some large changes occurring in sulfur's global supply.

There is some development of refinery and natural gas processing capacity, particularly throughout Asia. Sulfur production in East Asia, South Asia and West Asia has seen large increases since 2013, she said.

There is also declining natural gas production, notable in North America and Europe.

On Jan. 1 2020, marine sector emissions in international waters will be slashed. The sector has to reduce sulfur emission by more than 80% by switching to lower sulfur fuels. The current maximum fuel oil sulfur limit of 3.5 weight percent (wt%) will fall to 0.5 wt%.

"This is the most impactful sudden global change for ship owners and refiners ever," Boyd stressed.

There's some shifting on where S is being consumed, Boyd said. Increasing amounts are being used in East Asia, South Asia, West Asia, Latin America and Africa, while less demand is seen in North America and Europe.

Boyd said important bullish demand drivers to watch for in the end of 2019 and into 2020 would be increased fertilizer applications in both the fall of 2019 and spring of 2020. Demand restraints for this same time frame would be new S production coming online in different regions across the globe, she said.

Boyd said there are some refinery operation issues still lingering in the U.S. that affected production -- particularly the effects of Hurricane Harvey. The good news is domestic demand continues to be fairly firm, she said.

Production from natural gas processing in Canada has decreased during the last four years. In 2015, production was at 2.5 mmt and by 2018 production fell to under 2 mmt, she said. 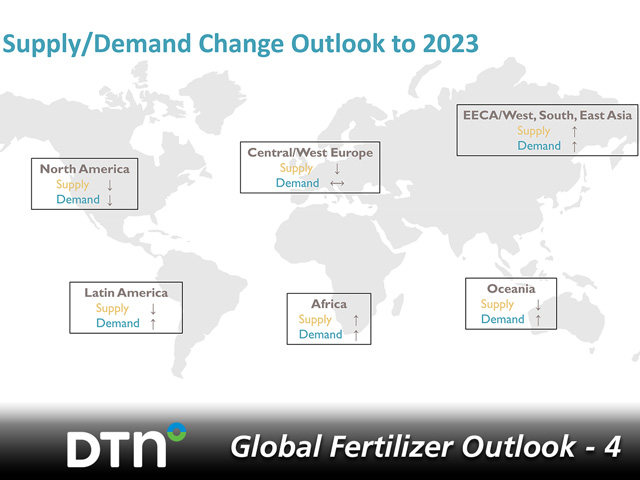