OMAHA (DTN) -- Various factors, such as lower energy costs and less demand due to weather issues, came together in 2019 to push world nitrogen prices lower. The outlook for 2020 and beyond is for a balancing supply and demand situation, which would support the global market, according to an analyst.

Yao Yao, a market research manager for Nutrien, gave the nitrogen outlook at the 2019 Fertilizer Outlook and Technology Conference held in mid-November in Savannah, Georgia. His outlook was hopeful after 2019 being a challenging year for the nitrogen industry across the world.

NITROGEN UNDER PRESSURE IN 2019

Yao said global nitrogen prices in 2019 were under pressure for several different reasons. Weak trade growth, lower energy prices and trade disruptions all combined to keep prices from rising much in the year.

Global nitrogen feedstock costs were estimated to be significantly lower in 2019, which brought down production costs. These lower costs were present through most of the year and put pressure on global nitrogen prices, he said.

Yao said the good news for fertilizer producers is supply and demand should be more balanced in 2020, particularly for urea. The urea cost curve indicates a $25-per-metric-ton reduction in marginal costs between 2018 and 2019, he said.

Yao said ammonia exporting has seen some considerable changes in recent years, led by the actions of the U.S.

Iran has its ammonia exports dropping by 62% from 2018 to the 2019 forecast, due to U.S. sanctions, he said. Other regions have picked up this slack, with Southeast Asia exports jumping by 19% and Russia seeing a 4% jump in ammonia exports during this time.

In addition, the U.S. has reduced net import demand by 27% from 2018 to the 2019 forecast. This was due to an increase of domestic production, he said.

Yao said positive regional trade balances appear to be in the cards for urea in the near term. Egypt, China and Southeast Asia all have increased urea production from 2018 to the 2019 forecast. Only Iran saw a dramatic decrease of 39% from last year, again due to the U.S. sanctions.

There were some decreases in key urea importing regions. The U.S. and Turkey both saw decreases of 13% and 10%, respectively. The U.S. imported less urea because of increased domestic production.

In 2015, China exported 13.8 mmt of urea, but dropped exports to 8.9 mmt in 2016, 4.7 mmt in 2017 and 2.5 mmt in 2018. The production drop was because of the well-documented production slowdown in the country, thanks to government regulations on the effects of manufacturing on the environment.

Yao said Chinese urea exports are set to increase in the 2019 forecast to 4.5 mmt to 5 mmt. This is due to improved operating rates and increased production in the country, he said.

Yao said he expects U.S. nitrogen demand to rebound in the 2019-20 fertilizer year, led by a projected strong spring season. Corn acres are expected to increase, and 58% of nitrogen consumption in the U.S. is used in corn production, he said.

Longer term, nitrogen demand is expected to continue to grow in the coming years, Yao added.

Nitrogen consumption is expected to be driven by Latin America and South Asian countries, he said.

Yao said the forecast for 2019 to 2023 is for global nitrogen demand of about 8 mmt and supply of about 6 mmt. This appears to be a fairly well-balanced market with slow capacity additions, relatively stable Chinese urea exports and historical demand growth outside of China.

This appears to be a rapid tightening of global nitrogen supply and demand, he said. 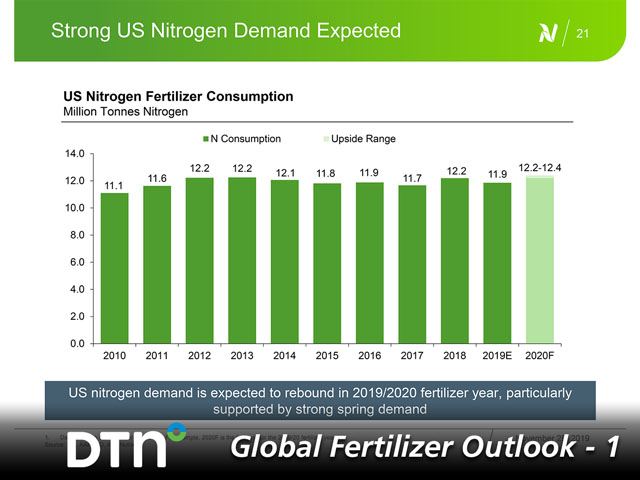