INDIANAPOLIS (DTN) -- When Ohio farmer Fred Yoder testified last month before the House Select Committee on Climate Change, the long-time no-till farmer and champion of climate-smart farming practices told lawmakers one of the best things that could happen would be to get back a carbon market that would encourage farmers to use those sort of farming practices.

"We need to have a metric that defines what carbon is worth," Yoder said. "I told them if you incentivize a farmer to sequester carbon, they are going to do it. There should have been a cover crop on every single acre of prevented planting this year to sequester carbon."

Yoder added, "I really pushed that carbon could be the next big crop we really consider to cash in on, and get ecosystem services benefit for planting it, and we should be able to be compensated for that."

Yoder said he also tried to connect the dots between carbon sequestration and water quality. The same farm practices, such as no-till and cover cropping, that build organic matter in the soil also increase water-holding capacity and better filtering of nutrients such as nitrogen and phosphorus.

"It's a very simple connection that the same things that improve water quality are also the same practices that sequester carbon. But we don't champion policy that gets two bangs for the buck," Yoder said. "Here in Ohio, we are back on our heels because of nutrient movement, and we could kill two birds with one stone with climate policy as well as nutrient policy. But we just can't seem to chew gum and walk at the same time."

Agriculture hasn't been able to effectively scale up ecosystem markets in more than two decades of work, but there are renewed efforts to build a market that would pay farmers for their conservation and environmental practices.

One of those initiatives got a financial boost on Tuesday when the Foundation for Food and Agriculture Research (FFAR) announced a $10.3 million award to build out the research arm of the Ecosystem Services Market Consortium. The consortium, a group of more than 40 major agribusinesses and agricultural trade associations, will match the grant over the next three years to fund a total of $20.6 million for both research and development of environmental markets for farmers. The grant was announced at the beginning of the Sustainable Ag Summit in Indianapolis spearheaded by the group Field to Market.

The Ecosystem Services Market Consortium has been assessing what has worked and why some initiatives have failed. ESMC is looking to quantify soil carbon, but also overall net greenhouse emission reductions, water quality and water quantity. The goal is to "stack" the environmental services provided by a farmer or rancher's conservation practices.

"We're designing markets that are created from the point of view of farmers and ranchers," said Debbie Reed, ESMC's executive director. "So we have to look at all of these benefits together. That's why we're looking at stacking both carbon and water credits."

One of the failures of these markets hasn't so much been the lack of enthusiasm from farmers, but the lack of serious buyers. Yet, Reed noted, an array of major corporations in and out of agriculture have made large commitments to lower carbon footprints in their supply chain.

"We have the buyers and we have the suppliers, and we are just creating a market that works for both so we meet everyone's needs," Reed said.

"We're really creating the tools and the toolset that allows all of us collectively to say these are the metrics and the quantification approaches so we can show where the needle is moving on those assets we are generating, how that needle is moving and where it is moving."

One of the key goals of the consortium over the next three years will be to better validate and monitor the environmental impact of conservation practices by farmers and pay them through an ecosystem services marketplace. In that time, the plan is to launch a new ecosystem market. The consortium is working now on some pilot projects, including a 50,000-acre project with the Noble Foundation in Oklahoma and Texas. The pilot projects are expected to soon migrate to the Midwest.

IHS Markit, formerly known as Informa, conducted a study for the Noble Institute released in September showing the market for ecosystem credits in the U.S. could be as high as $13.9 billion. The study pegged the demand for a carbon market from agriculture at 190 million metric tons with a value of about $5.2 billion. Credits pegged to nutrient reduction in waterways for nitrogen were valued at $4.8 billion and phosphorus at $3.8 billion. https://ecosystemservicesmarket.org/…

ESMC's plans are aggressive, long-term. The group wants to enroll as much as 30% of crop and pasture land across the country by 2030. ESMC stated that would affect as many as 250 million acres.

Ecosystem services are developing in a variety of ways, such as in dairy where Newtrient LLC is working to develop tools to offset the environmental footprint of dairies, particularly with manure management. When it comes to water quality and phosphorus reduction, there are parts of the country where capturing phosphorus at the farm level cost roughly 10% of the cost of capturing it downstream at a municipal water treatment plant, said Steve Rowe, president and CEO of Newtrient.

"It's a new business and we're trying to create new income streams for farmers," Rowe said.

Carbon and ecosystem service markets are truly starting over. More than a decade ago, farmers enrolled in the Chicago Climate Exchange (CCX), which at its height paid around $4.70 per ton. The CCX had 8,700 farmers and landowners signed up with 17.2 million acres enrolled. The CCX folded after it became clear Congress would not approve a federal cap-and-trade plan, and its carbon credits had fallen to just 15 cents per ton.

A FARMER GETS PAID

Trey Hill, a Maryland farmer, farms a little more than 10,000 acres in Maryland along the Chesapeake Bay. Hill also was the first farmer to use Granular software tools to sell into the carbon market operated by Nori, a Seattle-based startup focused on creating a trading market exclusively focused on removing carbon from the air. Hill used the software tool Granular for financial management and monitoring inputs and costs on the farm. The data, though, was also able to measure Hill's carbon footprint.

"What it did was make a nice facilitation for the migration of data over to the models Nori's running." Hill said. "So I really didn't have to do as much work as you might think, in part because of the technology being used on the farm."

Nori hasn't formally launched yet, but just completed a "lightning sale," using Hill's farm as a pilot project to sell off carbon credits meant to prove Nori could integrate with Granular's data off Hill's farm to demonstrate carbon sequestration on his farm. The sale generated $86,000 in credits with 342 organizations and individuals who bought more than 5,300 metric tons of carbon that went for $15 per ton. The sale was meant to demonstrate Nori's ability to take direct orders from small buyers like individuals and avoid brokers.

Nori plans a second sale with as many as 100,000 tons sometime in early to mid-2020, working with six other farmers from across the country. In that sale, Nori wants to sell to larger corporations to test how that would work.

Christophe Jospe, a co-founder and chief development officer for Nori, said the marketplace has another 20 people or groups in the queue in various stages of partnerships. Jospe said Nori, as a startup, can only handle working with farmers of scale who have 1,000 acres using various soil health practices to sequester carbon.

"We can't work with every farmer," Jospe said. "That will drown us, so the question is how we strategically partner."

"We're laser focused on carbon removal and that's just the addition of soil organic matter over an extended period of time, which can provide a whole range of ecosystem services and soil health benefits," Jospe said.

Hill noted farming is a tight-margin business and selling carbon credits provides an opportunity to earn a little more money for practices he was already implementing on his farm.

"For me, I believe in what we are doing so it makes it a little easier decision," he said.

Last summer, Indigo Ag, a company focusing on software tools and micronutrients for soil biology, launched "Terraton" to sell carbon credits. The company is signing up farmers now and working to measure their soil carbon. Indigo stated the company expects to sell its first credits sometime late in 2020. Indigo told DTN it has contracts with farmers representing approximately 10 million acres. For farmers who sign up this year, Indigo Carbon is guaranteeing $15 a ton.

Indigo advertises farmers could generate up to 2 tons of carbon per acre, a level considered significantly higher than most research shows on carbon sequestration on working lands, though their range of carbon credits that could be generated on this first sale from 10 million acres could be anywhere from 5 million tons to 20 million tons. Indigo maintains "regenerative growing practices" across a wide scale could significantly increase soil organic matter to boost carbon sequestration higher than past projections. https://www.indigoag.com/…

Indigo also is lobbying Congress to give farmers the same kind of tax credit to sequester carbon that Congress granted to the fossil fuel industry. Oil, gas and coal companies can receive a tax credit of up to $50 a ton for permanently captured carbon dioxide and up to $35 a ton for carbon captured and injected into the ground. Indigo argued, "It seems reasonable that we should be willing to pay farmers for this service as well."

"Farmers have a huge role to potentially play drawing down carbon and sequestering it in the ground with agricultural practices," Hayhoe said at event last month outside Cedar Rapids, Iowa. "Biochar, permaculture, no-till, managed grazing and cover crops, all of those different techniques, depending on the nature of your soil and your crops and your operation, you have your own unique combination of what works for you."

To make it work, there needs to be a price on carbon, Hayhoe said. "Because, right now, the farmers who are doing it understand it improves soil health and they understand it's the right thing to do. But having a price on carbon where farmers are actually paid to farm carbon would be an even greater boost to the rural economy."

Reed, who has been working on carbon markets for more than two decades, said scientists are stressing every tool is needed to pull carbon out of the atmosphere as carbon dioxide measurements globally continue to rise.

"Scientists say it is 'go time.' We have to do everything we possibly can," Reed said. "We can no longer try to choose among different policy options to draw down carbon. So we're just bringing together the tools that make that happen and do it in a way that ensures long-term demand and the ability to meet that demand." 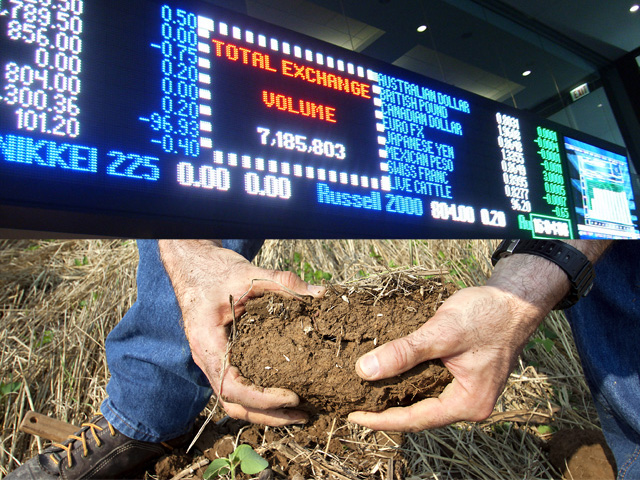