For instance, USDA forecasts Kansas land values to increase 4% this year, while at the same time, the Kansas City Federal Reserve finds that nearly 30% of all ag loans have experienced some kind of issue with repayment.

Not all statistics are so clear-cut. At meetings with bankers this fall, Kansas State University professor Mykel Taylor asked what proportion of their loan portfolio they considered vulnerable. She didn't define the term, and the audience answered with clickers.

"I was hoping they were going to say like 5 to 10%, and it was more like 20 to 30%," Taylor told DTN. "I think that's their perspective -- they've got a big chunk of their loan portfolio that they're really having to work with."

Many of these bankers reported working with clients to restructure farm debt in an effort to boost cash flow, and in some cases, that's required farmers to sell some land.

"Something I see that can push down prices in the (land) market is if the restructuring of these loans doesn't work," she said. Restructuring buys farmers time, but if commodity prices don't recover in the next year or two, that may be all the extra time they get.

"I don't necessarily think we're in a situation of lots of bankruptcies and total liquidation of farms," she said. "What I see happening is we're chipping away at the land base and selling off small parcels trying to generate money. But if you have enough farmers in that situation where part of their restructuring is selling off some land, or their restructuring doesn't work and they have to sell off even more land, it's going to put pressure on the land market because it's going to increase the supply of farmland for sale."

As DTN reported in the first installment of this two-part series, Land's Linchpin, stable to slightly higher land values have been supported by a balance of supply and demand, rather than by farm incomes. In this story, DTN examines what it would take for land values to tumble.

In 2018, government payments made up 38% of farm incomes in Kansas.

Between crop insurance, safety net programs like Agriculture Risk Coverage (ARC) and Price Loss Coverage (PLC), and the Market Facilitation Program (MFP), the state's farmers saw higher incomes than the year before without a substantial change in the commodity prices.

With USDA planning on spending up to $14 billion on its second iteration of the program, Taylor said she expects government payments will once again make up a big portion of farmers' incomes.

"MFP timing-wise has been really important to producers, helping them to not have to look at land as something that they have to liquidate in order to generate cash flow," Taylor said.

It's important to remember that not all farmers are struggling, she said. While she wouldn't categorize anyone as being flush with cash, MFP gave some farmers the extra capital to buy land, so it has supported the land market by delaying some sales while at the same time increasing the pool of buyers.

"2020 therefore scares the heck out of me, because I'm not expecting MFP and there's not much saying that commodity prices are going to rebound tremendously," she said. "So what are you going to do if things don't improve? 2020 could be pretty bad."

WEATHER, INTEREST RATES COULD TURN UP THE PRESSURE

"In Kansas, especially, we've had pretty good yields for several years now, and I don't even like to say the word, but if a drought hits and it's just in Kansas, that's going to really be a problem," she said. She added that any drought would have to cover a very wide area in order to have a corresponding increase in crop prices.

With fewer bushels to harvest, a localized drought could force more farmers into financial stress. Combine that with a narrow area, and pockets of the land market could see inventory growth outpace available buyers.

Farm consultant Moe Russell said if the Federal Reserve reverses itself on interest rates and starts moving them higher, it could put land values under pressure.

For older landowners, higher interest rates would make a certificate of deposit at a bank an attractive alternative to land ownership and could prompt some to liquidate. For struggling farmers, higher interest adds to the cost of servicing their debt.

Land values could also decline if the U.S. economy goes into a recession or there's a major global economic shake-up, either of which could cause investment money to dry up, further limiting the buying pool and slowing the number of Section 1031 land exchanges.

"It would take a little panic in the market to get more supply and less demand for farmland," said Randy Hertz, CEO of Hertz Farm Management. "But I don't see that happening any time soon."

Howard Halderman, with Halderman Farm Management and Real Estate Services in Wabash, Indiana, said he doesn't think land values are at a tipping point just yet.

"But I would continue to watch the supply of land. When that starts to back up with 'No Sales,' then we could see farmland values head lower."

For the first story in this two-part series, see Land's Linchpin - 1 at https://www.dtnpf.com/… 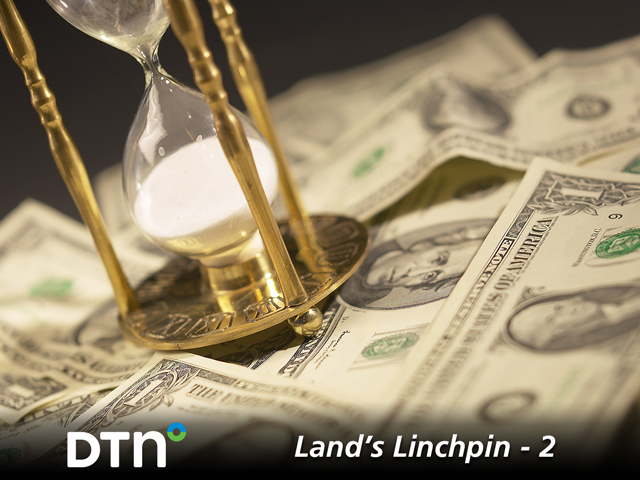