INDIANOLA, Iowa (DTN) -- A 67-acre tract of farmland in Sioux County, Iowa, brought $18,300 per acre at auction earlier this month.

In September, Hertz Farm Management had 10 sales at $10,000 or more per acre and eight sales above $11,000 per acre for corn and soybean ground, CEO Randy Hertz told DTN.

These sales may be isolated cases in today's market, but the trend of steady-to-slightly higher land values is not. Farmland brokers report sales around the Midwest continue to attract strong buying interest, primarily from farmers.

Farm profits have been hard to come by in recent years and are no longer the driving force of the land market. Instead, farmland values' stability has helped farmers weather the storm of low commodity prices. But with little change seen to agriculture's economic outlook, DTN takes a look at what's holding land values up -- inventory, interest rates, income and investment -- and what it would take for them to tumble in this two-part series, Land's Linchpin.

In the old days, a retiring farm couple would sell the farm, buy a house in town and live comfortably in retirement. They didn't necessarily want to rent their farm because the prevailing crop share leases were risky.

In contrast, today's cash rents are relatively risk-free, and it doesn't take a large number of rental acres to generate a secure retirement income for a frugal farm couple. For an older couple looking for a safe investment, renting out a farm is attractive, providing a 2.5% to 3% return in annual cash rental income compared to the less than 2% return they'd earn on a certificate of deposit at a bank.

In fact, 60% of the farmland in Iowa is owned by people 65 years and older.

"People like owning land," said Winnie Stortzum, a farmland broker with Farmers National Company in Arcola, Illinois. "They know the investment. They like the investment, and they are comfortable with it."

Stortzum said he spoke with a 73-year-old investor who bought a farm for $10,550 per acre this spring.

"He has never been married; has no heirs, no nieces or nephews. He said, 'I know I shouldn't be buying land at this age, but I just like the investment.' And he is looking into charities to leave his land to," Stortzum said.

Tax laws also disincentivize farmland sales. If you hold your land until you die, your heirs get a step-up in basis and do not have to pay capital gains tax on the farmland if they sell it for market value at the time of your death. If, however, you sell that land while you are alive, you pay tax on all the capital gain since you bought or inherited the ground. Consequently, most farmland sales today are estate sales.

Another reason farm owners aren't selling: They don't need to. Eighty-two percent of Iowa farmland is owned free of debt, according to a 2017 survey by Iowa State University. This is up from 62% in 1982 and 78% in 2012.

"That provides huge stability in the land market," Hertz said.

Despite lower farm profits and declining working capital, lenders are not pressuring for a large number of land sales because many farmers have adequate net worth to weather lean times. A recent report by USDA's Economic Research Service that looked at measures of solvency, liquidity and repayment capacity found that only 10% to 15% of farms were classified as being under financial stress.

It's important to remember that not all farmers are losing money, either, said Howard Halderman with Halderman Farm Management and Real Estate Services, based in Wabash, Indiana. "Farmers have had the opportunity to sell over $4 cash corn and over $10 soybeans the past three to four years and over two to three weeks" each time, he told DTN.

"And this fall, cash basis for corn in southern Minnesota was 5 to 10 cents over the Chicago futures price when it's usually 40 cents under the Chicago price," said Moe Russell with Russell Consulting Group in Panora, Iowa. That's because buyers are worried about availability of quality grain, he said.

"Farmers who are good marketers have been able to hold their own financially, even in these tough times," he said.

Also, not all places had crop failures or lower-than-average yields this year. Corn yields in the area of that eye-popping farmland sale this year are over 200 bushels per acre while soybeans are yielding 50-70 bpa.

Farmers aren't selling, and they are doing most of the farmland buying.

"In our farm sales this year, 70% to 75% of the buyers were operating farmers," Halderman said. "It's been closer to 50-50 farmers to investors the past few years."

"I borrowed some money to buy some farms and locked in 3.25%, fixed for 10 years," said Murray Wise, a farmland broker and investor. "I kind of felt sorry for the banker."

The general economy also benefits from low interest rates, he said, by forestalling a recession. "The prime rate at 5 and moving down is a positive sign for the economy. And all the big banks are making phenomenal money with a rather conservative portfolio."

USDA authorized $14 billion for MFP payments this growing season that will be divided up into three payments, the first of which farmers have already received. The remaining two are dependent on the status of trade negotiations, with USDA currently planning on cutting checks in November and January.

Farmers with prevented planting claims this year will also be paid an additional 10% under a disaster assistance bill.

Ward said the unfortunate part of that arrangement is there's no knowing how long support will continue since both of those are ad hoc programs.

That uncertainty, along with other challenges to corn demand, could lead to tighter incomes over time.

"There's a question mark on the ethanol industry, so we'll see what happens there," Ward said.

Farmland continues to be converted to suburban houses and business sites. A recent study by the American Farmland Trust found that 31 million acres were lost to development between 1992 and 2012, including 11 million acres of the nation's best agricultural land.

For perspective, that's 175 acres per hour of agricultural land lost to development, or 3 acres per minute.

In the Texas Panhandle, as around the U.S., these exchanges are helping to prop up farm and ranch values, Gilliland said.

"Landowners surrounding cities, such as Lubbock, look for other ag property to exchange into and avoid paying high capital gains taxes on land they sold for development," he said.

Land exchanges are not a huge portion of land sales, but they are still significant. The Iowa chapter of the Realtors Land Institute estimated in 2019 that potential buyers using 1031 Exchanges influenced up to 20% of the farmland auctions, either by buying or bidding. 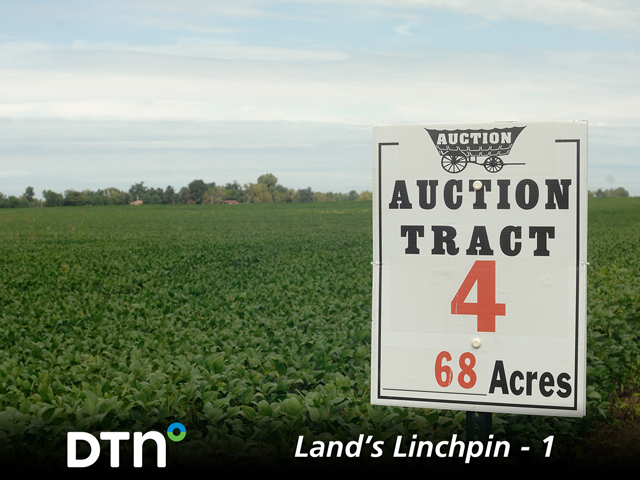