OMAHA (DTN) -- The extremely wet, cool weather in the first half of the growing season for most of the Midwest had a negative effect on all crops -- especially forage crops.

Farmers in the upper Midwest saw many acres of alfalfa damaged from winterkill and once the growing season started, forage crops were behind normal growth patterns. The wet weather continued through first cutting and affected producers' ability to produce quality forage.

The result will most likely be higher forage prices due to limited supply of higher-quality hay. While second-cutting alfalfa has had fewer weather-related issues, the challenging weather is not letting up.

Brian Lang, an Iowa State University Extension field agronomist located in Decorah in northeastern Iowa, said it was a tough start to the growing season for forage producers in his region. High levels of winterkill were seen in his area, but it was even worse for Iowa counties along the Mississippi River and into neighboring Wisconsin.

This forced many producers to eliminate some alfalfa acres due to lower stand counts and less forage will be available, he said.

Lang estimated roughly 30% of alfalfa acres were lost to winterkill. Combine this with the 20% new seeding the area sees every year, and you have half of the alfalfa acres in the region being replaced in one growing season, he said.

Then, once it was time for first cutting, usually around the third week of May, no one could harvest the crop because of rainy conditions.

"We barely turned a wheel around here at the end of May because of the rains," Lang told DTN.

First cutting in most cases was pushed back into June, several weeks later than normal. Some attempted to harvest alfalfa but the rain continued to fall and thus both quality and tonnage suffered because of the uncooperative weather conditions, he said.

Maria Cox, who farms near White Hall, Illinois, said the wet conditions this early growing season had a negative effect on forage crops in her region. She estimated yields were about 30% less than average.

The problem in her west-central Illinois area was it so wet farmers could not get the first cutting of alfalfa harvested in a timely fashion, she said.

"I know people who are going to miss a complete cutting of alfalfa as a result," Cox said. "We had a window of opportunity to get most of our first cutting baled timely."

Across the border into Indiana, the situation is similar for forage producer Jim Brown. The Lebanon, Indiana, farmer said he was delayed in cutting his forages at the start of the growing season.

In addition to the alfalfa crop not being harvested on time, baling of grass hay was also delayed. Timothy grass and Orchard grass were both cut later than normal, somewhere around five to six weeks late, he said.

Brown said the constant wet field conditions have been extremely tough on his alfalfa stands. Alfalfa is a crop that does not like "wet feet," and as a result he believes these stands are going to be compromised, he said.

"I think we should expect heavy weed pressure next go-around (cutting) due to the number of row fields grown up to weeds that will go to seed soon," Brown said.

Most of Brown's forage customers are local people with horses, or they have kids with 4-H livestock projects. His customers say they are worried about where hay prices may go as the weather has limited how much quality hay was produced, he said.

The sales report on the Dyersville (Iowa) Sales Company page (https://dyersvillesales.com/…) after their most recent sale on July 10 shows hay prices are indeed rising. The market was $10 per ton to $40/ton higher on alfalfa.

The top in the alfalfa market was $310/ton for first-crop alfalfa round bales with the bulk of big squares sold from $210/ton to $290/ton for second-cutting alfalfa, according to the report.

"The load that sold for $310/ton the farmer sold the exact hay two weeks ago for $240/ton so demand for alfalfa is excellent," the report stated. "Could not ask for hay to sell any better this time of year."

Cox said she believes higher-quality hay in her region will be in short supply while lower-quality hay should be available. This situation has already pushed hay prices roughly $30 to $40/ton higher than last year, she said.

With second cutting of alfalfa starting in some Midwest locations, the weather appears to be a little more cooperative than for first cutting. Even with this assist from the weather, alfalfa producers do report some issues.

Jeff Jackson, alfalfa/forage specialist for CROPLAN by WinField United based in Brookings, South Dakota, said he has been getting quite a few calls from alfalfa producers as second cutting approaches. Many producers want to know why the crop appears to be shorter and is blooming already despite all of the rain seen during the first part of the growing season, he said.

With temperatures finally climbing higher in recent weeks, Jackson believes the second cutting is not growing as tall as some would like because of heat stress. Similar to drought stress, heat stress can limit the growth of alfalfa, he said.

"I have been getting the question of whether to cut or not," Jackson said. "It is time to get it cut."

Alfalfa's lignin content reduces animals' ability to digest and use alfalfa. These varieties were developed to provide more fiber digestibility to livestock but a side benefit is that it can lengthen the time period when alfalfa can be harvested, he said.

By planting these varieties you could widen the optimal harvest window and maintain quality, especially useful during these rainy periods of time, he said.

The University of Minnesota Extension has information about reduced-lignin alfalfa varieties, which can be found at: https://extension.umn.edu/… 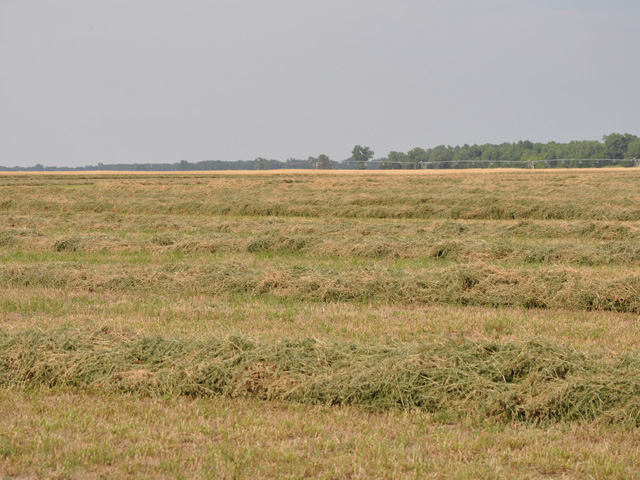