ROCKVILLE, Md. (DTN) -- June is nearing an end, but you wouldn't know it from looking at many corn and soybean fields this year.

"It's looking great -- if it was the first of May," Missouri farmer Bob Birdsell said of his corn crop, which he finished planting June 14, unthinkably late in most years.

But at least it's all in, which is more than Birdsell can say of his soybeans at the moment. "Beans would have been planted, if we hadn't had a tractor fire," he said. "The planting tractor caught fire on a Friday night and it was the following Tuesday at 5 p.m. before we were able to get another tractor to pull the planter."

That about sums up the 2019 planting season for many of DTN's Agronomy Advisers, a group of farmers and ranchers who report on their operations and current events in agriculture each month.

Just when you thought it couldn't get worse -- it did.

Now that one of the most challenging planting seasons in history is finally trickling to an end, farmers are taking stock of what they have and what they don't have. Crops got a late, challenging start to life. Disease, insects and unknown weather loom on the horizon. Empty fields sit, in need of a plan and management. No time to rest.

For some growers, the 2019 planting season never really happened. "It's nearly July and we haven't really started planting yet," said Josh Miller, whose fields in southern Illinois sit between the Ohio and Mississippi rivers. "Many of our acres are underwater from the rivers," he explained. "They've been underwater since about February."

Miller will file for prevented planting on the majority of his acres this year and manage only a fraction of the corn and soybeans he planned for. Instead of scouting and tending to developing crops, he will spend much of his summer repairing holes and leveling fields roiled by floodwaters. "For some of the acres, the plan is to use summer cover crops, kill them in early fall, and plant winter wheat," he added.

Likewise, in southeastern Michigan, Raymond Simpkins spent June waiting for a break in the weather that never came. When he checked in with DTN, the skies had just dropped another 1.1 inches of rain on his land. "We had precipitation 118 out of 170 days by last week," he said. "I will leave around 500 acres idle -- got about 140 acres of beans in." Simpkins plans to use tillage to control weeds on those empty fields this summer.

He is worried about the dairies in his region. "Many of the large dairies in our area have no corn planted, and can't get forage made," he said.

In the Texas Panhandle, cool conditions and persistent rains have hijacked the cotton planting season, too, added farmer and rancher Mike Lass. "Our cotton is looking like an old Clint Eastwood western, 'The Good, the Bad and the Ugly,'" he joked. "I'd say we're going to lose at least 50% of our cotton acres in the area. Most acres have been replanted with corn or milo."

Of the Agronomy Advisers, only Miller was still hoping to plant some corn acres in the coming week. Most were done, but far later than they would prefer. In north-central Missouri, Kyle Samp wrapped up corn replanting on June 8. In northeastern Nebraska, Kenny Reinke sprayed out his sparse wheat fields and finished corn planting on June 1.

Like the season behind it, the corn crop is late and highly variable. Birdsell's crop ranges from newly emerged to 6-leaf plants, he noted. Some growers were surprised their corn looked as good as it did -- but they know its resiliency to the future stresses is already compromised. "Corn is going to be especially vulnerable to two to three weeks of poorly timed hot and dry," noted Kyle Samp, of north-central Missouri.

"My biggest fear looking forward right now is late-season growing conditions," said Reinke. "This is a crop that can't afford a shortened growing season. It needs growing degree units to push it along all the way through the growing season -- guessing right now, we're looking at pollination in the 20s of July."

Given the ample moisture around, disease seems inevitable, Samp added. "Disease is creeping in on some of this corn, but it's hard to decide whether to throw some resources at this corn or just let it be," he said. "Northern corn leaf blight and gray leaf spot have been found in our area."

Soybeans are still going into the ground, and soon growers will have to decide if it is more profitable to plant them or declare prevented planting on those acres.

In central Ohio, Keith Peters just received another devastating 5 inches of rainfall on top of his saturated acres. More than 200 acres of his corn and soybeans are lost to floods, and he still has one wet field of soybeans to plant. Samp also has one final field of beans left to go in Missouri, with similar weather.

"Today's rain may have sealed its fate, but I'm not going to make [prevented planting] official until after July 1," he said.

All but 10% of Charles Williams' soybean acres were planted in northeastern Arkansas. What's left is at the mercy of the rivers, he said. "River forecasts don't look particularly favorable for planting at this time, but we'll see."

The decision is complicated by low prices and new government policies rolled out this month, which require acres to be planted in order for farmers to receive trade aid payments for them. "Many people have planted beans on their prevented planting corn acres since the disaster money will be paid on planted acres, however these people regret doing this since the full prevented planting [payments] would have probably paid more," noted Reed Storey, of east-central Arkansas, who squeezed in his final soybean planting on June 15.

In Missouri, Samp has tried hard not to let the rollercoaster of federal ag policy changes this spring affect his agronomic decisions, for just this reason. "All the chatter on the government programs has been such a mess that I've tried to tune it out," he said. "If we had a real program that we knew the rules for, we might have factored it in, but it's pretty difficult when even the rule makers don't know the rules."

To add to the complexity, it's difficult to return unused treated soybean seed, which does not hold up well in storage and is coated with chemicals that make its disposal complicated.

"We have mostly all treated seed, so we will do our best to get it in the ground," Birdsell said. If he doesn't, he will take advantage of USDA's recent decision to move the grazing and haying date for cover crops on prevented planting acres to September 1 from November 1.

Williams isn't making any plans for his potential prevented acres just yet -- for now, he's focused on the crops he does have in the ground.

"Weather is, as always, key," he said. "This next month should be the tale of it." 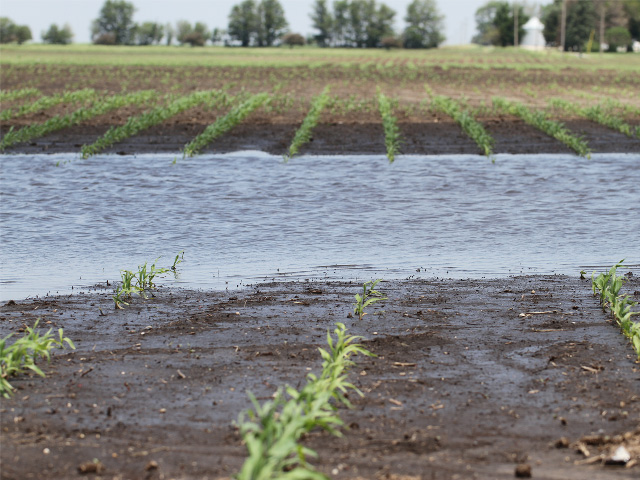