OMAHA (DTN) -- Farmers from Oklahoma to Mississippi are facing crop disasters as flooding continues along the Arkansas River and Mississippi River.

At a news conference Wednesday, Hutchinson said, "This is a flood of historic magnitude. It surpasses all Arkansas River flooding in our recorded history," according to the Arkansas Democrat-Gazette.

Hutchinson added, "So there is a lot of unknowns in what we face as the state. The levee system is strained to the limit. While it is holding in most areas, there are breaches and overflows, and we are watching very carefully."

The levee system along the Arkansas River was not built for the level of expected flooding, the governor wrote in his letter to the president.

Flooding has essentially struck agriculture hard throughout the Mississippi and Missouri River watersheds from Minnesota down to the Gulf of Mexico as intense storms have continued to pound the Midwest, Plains and now south-central U.S. In the latest stretch of storms along the Arkansas River watershed, thousands of people have lost their homes in Oklahoma and Arkansas.

Arkansas farmer Robert Stobaugh said the Army Corps of Engineers had warned the flooding would last weeks, or possibly months. He's already got corn under water, but he stopped planting right before the river waters rose. The crest will hit his farm on Saturday, Stobaugh said on an Arkansas Farm Bureau podcast.

"It's something I haven't seen in my farming career," Stobaugh said.

With the crop ready to harvest in southern parts of the state, Schulte said there are serious concerns about the forecast over the next seven to 10 days.

"Across the state, it's been remarkable how the crop has held up so far," Schulte said. "If we could just not have rain, I think we would have an opportunity to have a decent crop. We are certainly concerned about what those losses could be if we have another week of rain."

Schulte noted it's unusual to see so many waterlogged fields across Oklahoma.

"There's a lot of washed-out fields on bottom land, roads are also an issue," Schulte said. "Transportation is a real issue because we've had a lot of roads and culverts washed out. It happened all across the state at one time. Usually, we'll have flooding in the east and escape it in the west, or vice versa, but that is not the case this year."

"I thank President Trump for recognizing the urgency of our request and responding so quickly," Gov. Edwards said in the statement.

In Louisiana, the Army Corps of Engineers is planning on Thursday, June 6, to open the Morganza Spillway along the Mississippi River. The spillway will be opened for just the third time since the 1950s, though it was last opened during the 2011 flood event. Opening the spillway will relieve some pressure on the Mississippi River, but it will send floodwaters into five parishes (counties). Once it opens, several small towns and an estimated 25,000 acres of farm ground, mostly planted already, could quickly be flooded.

"We expect a total loss of the crops planted," Louisiana Ag Commissioner Mike Strain was quoted as saying in The News-Star in Monroe, Louisiana. "There will be a loss of a great deal of crops."

Strain warned farmers to move all of their livestock and equipment out of the lowlands.

Louisiana lawmakers wrote Agriculture Secretary Sonny Perdue to highlight the impact of flooding in the state.

"Louisiana agriculture is still recoiling from the heavy hit provided by severe weather and tariffs imposed by China in the 2018 crop year," Louisiana lawmakers wrote Perdue. They added, "The opening of the Morganza Spillway will further devastate the lives and livelihoods of Louisiana farmers."

Bryant said of farmers, "Not only are their homes flooded, they won't have a crop," reported The Jackson Clarion-Ledger.

The Clarion-Ledger also interviewed Mississippi farmer Ronnie Kerr who said fields on his 6,800-acre farm have been flooded since at least January from seepage, but the flooding is getting worse. 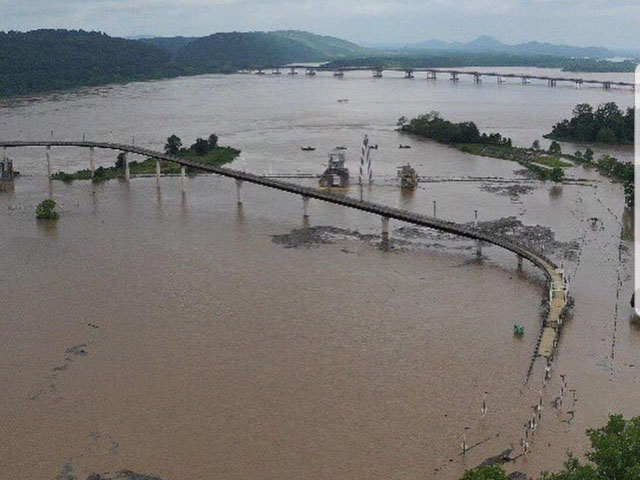