Brian Martin slid a spade into a patch of cereal rye planted in corn stubble. He pried out a chunk of dark soil topped by green leaves then crumbled a bit of the dirt between his fingers. New roots, old roots, mellow silt loam. He crumbled some more dirt and gave a satisfied chuckle. "Earthworm," he said and pointed to a shiny, wiggling creature.

Brian is a soils geek. Finding earthworms at the entrance to a field -- where heavy-equipment traffic over many years has compacted the soil -- has made his day. It means his work to improve his family farm's soils is paying off.

This is important because the Martin family farm, near Centralia, Missouri, was not blessed with the best soils. As a result, yield potential sometimes is limited, especially for corn. Improve the soils, improve the yield potential. Brian thinks he can do that.

To that end, the 33-year-old employs several soil-improvement strategies, including a no-till regime and a cover-crops program he hopes will build soil health and fertility. He is a member of the Soil Health Partnership and is enrolled in one of its five-year field trials. If Brian's strategies work, they could strengthen both the farm's economic and environmental futures.

"It's important that we leave the land better than we found it," Brian said. "As producers, we are a steward of the land, and it's our responsibility to take care of the resources we've been given."

Brian's interest in the soil comes naturally. His grandfather, Kenneth Martin, who founded the farm, helped draw soil maps of northern Missouri for the government after he came back from serving in World War II. He passed his interest in soils to his son Nathan and his grandson Brian, who followed him in the farming operation.

"Being cognizant of soil, erosion control and saving the ground for future generations is something he instilled in us," Brian said.

Kenneth is gone. Brian and his father, Nathan, farm together -- yet separately -- on 1,500 acres of cropland plus 300 acres of pasture and hay ground. They share equipment and labor, but own different business entities. Along with raising corn, soybeans and wheat, Nathan runs a 225-cow Angus seedstock and commercial operation named Martin Angus. Brian owns Martin Row Crops. The pair also does custom work.

Brian has off-farm income in the form of a Pioneer seed dealership and a consulting business named Martin Agronomic Services. He also works part-time as a crop-insurance adjuster so he can afford to build equity in the farm, buy machinery and -- in these low-commodity price times -- "keep things in the black and not in the red," he said.

Brian's fascination with soil got an early start as a member of an FFA soils judging team in high school. "You get pretty good at being able to ribbon a soil sample and know the textural class just by feel," he remembered.

That high school experience served him well when he joined the University of Missouri's (Mizzou) soils judging team. As a sophomore, Brian placed sixth nationally. "The stuff in the pits, getting down there where it counts. That's what carried me," he said.

Soil science was a minor for Brian at Mizzou. He earned a bachelor's degree in ag systems management (agricultural engineering) with a second minor in ag economics. He used the ag engineering background to land a job with CNH Industrial doing development work for Case IH and New Holland combines.

But farming always was Brian's long-term career choice and he came back to the farm full-time in 2012.

Soil improvement was on his mind from the beginning. The Martins farm over a clay pan that starts 15 to 24 inches below the surface. Above the clay is "loess over residuum or glacial till," said Brian the soils geek, using the taxonomic name for the soil type. A more common name is silt loam.

That's generally good soil for Midwest row crops, but the Martins' relatively thin layer of silt loam contains only 1 to 3% organic matter. That -- and the clay below it -- mean the soil can't usually hold enough available moisture for great corn yields, especially in dry growing seasons like 2018.

Planting cover crops is one of his strategies to build organic matter. It's a strategy that works especially well on a crops and livestock operation because the Martins can rotate a wide variety of cover crops that can both feed the cattle and improve the soils. As a bonus, cows grazing cover crops in a postharvest crop field make their own organic matter contributions.

Here's a sample of the cover crops the Martins have planted in the last few years: winter barley, winter wheat, cereal rye, annual rye, crimson clover, radishes and sunn hemp. Each year, 30 to 35% of the Martins' fields are in cover crops.

The Martins use a Kinze split-row planter and a Krause drill for most of their cover crops. Brian's first preference is the Kinze because of its accuracy. "You can get by with a reduced seeding rate if you get good seed-to-soil contact," he said.

The Martins have tried ground-broadcasting seed mixed with dry fertilizer. That can lead to streaky stands, Brian said.

They also have aerially seeded into standing corn. "We have had success, and we have had complete failure," Brian said. "It really depends on the amount of soil moisture you have. If it's not quite moist enough, the seed won't stick and germinate."

However the Martins plant, "as much as anything, we use cover crops to increase soil structure and water-infiltration rates," Brian said. "They also increase organic matter and reduce erosion in the few spots that are erodible."

That would be on top of already-good soybean yields: "I think (with more organic matter) we can improve soybean yields exponentially, even without major alterations like tiling or irrigation."

All of these soil-improvement plans are long-term with the next generation in mind. "We're looking for incremental changes," Brian said. "If you can improve the organic matter in your soil a little every year, eventually, you will get there."

As for tillage, don't even talk to Martin about it. He is not a fan.

He admitted that, in some areas of the country, it's necessary to break up and redistribute heavy residue. But, not in his area, where lower yields produce less residue. There also are long frost-free periods during winter when residue can decay. Here, he said, "Recreational tillage is not as common as it used to be, and tradition is not an excuse to continue to till. It's not ideal, and it's not the way I operate."

And, don't even suggest to a soil geek that it's occasionally necessary to use a moldboard plow for anything. "We are trying to improve filtrations rates with changes in soil structure, not destroy structure," Brian said.

The closest the Martins come to tillage is to repair ruts from fall harvest or in heavily compacted areas. They also occasionally use a three-point ditcher on their flattest ground to get water to move off the field as fast as possible. No worries about losing soil in the process: "When the slope is zero to 1%, erosion is not an issue," Brian said. 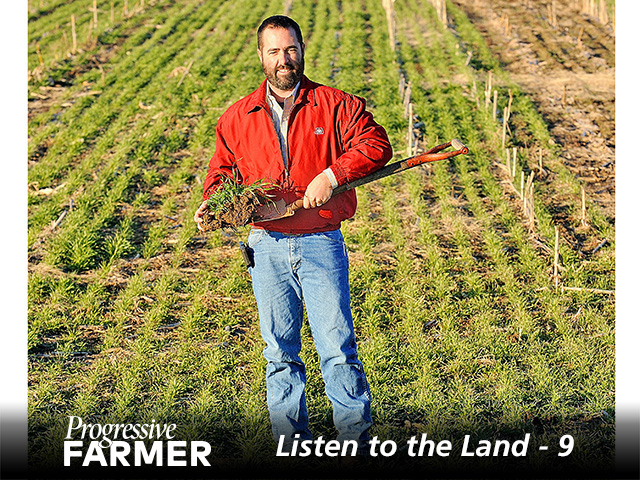