OMAHA (DTN) -- Casey Schuhmacher wants to do the best job he can feeding cattle while limiting feed costs. With soybean prices low, thanks to large global stocks and recent U.S.-China trade disputes, the Chadron, Nebraska cow-calf and stocker producer has considered adding soybeans to some cattle rations.

"I have looked into using beans to replace dry DDG (distillers dried grains) in a backgrounding ration for protein," Schuhmacher told DTN.

Despite the low cost and large supplies, cattlemen have a lot to consider before feeding whole soybeans to their animals. Cost of the feedstuff, handling logistics and storage concerns, and the issue that beans can have too much protein for cattle rations all have to be considered.

Cattlemen are looking at how the large soybean crop situation can be used to their advantage.

Jason Warner, a nutritionist with Great Plains Livestock Consulting, Inc. based in Eagle, Nebraska, said soybeans can be fed to beef cattle, depending on price relative to other protein feeds such as DDG.

Feeding three to four lbs./head/day of soybeans to beef cattle can be an excellent source of supplemental protein and energy.

Most soybeans test around 40% crude protein and 20% fat, with the fat content being a limiting factor for soybean inclusion in most rations, he said.

"In most rations for beef cattle, dietary fat levels in excess of 6% to 6.5% dry matter basis can have a negative effect on fiber digestibility," Warner said. "Soybeans should be limited to 25% of the ration and probably closer to 5% to 10% in most situations depending on other feeds in the ration."

Warner said soybeans do not need to be processed or heat-treated, they can be fed raw to cattle.

However, beans do contain anti-nutritional factors that interfere with protein digestion in mono-gastric animals and animals without a fully functional rumen. Cattle nutritionists say to avoid feeding raw beans to nursing calves or calves less than 300 to 350 lbs., he said.

Soybeans also contain the enzyme urease, which converts urea to ammonia, Warner said. The amount of urea included in a ration from other sources needs to be considered when feeding soybeans.

Warner said an important consideration with feeding soybeans is the protein the feed contains and how it is utilized by the animal. The protein in soybeans is mostly rumen-degradable (RDP), with a lesser amount being rumen-undegradable (RUP), or bypass protein, he said.

NO ECONOMIC SENSE FOR NOW

The real question is does feeding whole soybeans to growing or finishing cattle make economic sense right now? In nearly all cases, the answer is clearly "no," especially with the adoption of DDG as a source of protein in cattle diets, according to Warren Rusche, South Dakota State University Extension Beef Feedlot Management Associate.

The feeding of DDG has completely changed how feeders have operated the last 20 to 25 years, at least in terms of proving a relatively inexpensive source of protein, he said. As long as DDG are inexpensive to feed, soybeans remain a more costly protein source in many rations.

"About the only situation in which beans could be a viable, economic option would be if the beans were damaged, from like a freeze," Rusche said.

Rusche said there could also be cases in certain Northern Plains locations where marketing channels become so congested that cash bids dry up and storage options become limited. In this case, feeding soybeans may be a strategy to move the crop and avoid cash outlays for purchased feeds, he said.

Rusche said the other issues keeping cattlemen from feeding soybeans is the ability to store beans and the logistics of feeding it as a feed. While many cattlemen maybe have bins to store beans, they don't necessarily have the facilities set up to feed beans, he said.

Schuhmacher, the Nebraska cattle producer, said his issue with feeding soybeans wasn't storing the whole bean, but once it was run through the roller miller the oil would start to spoil and go bad. As long as it could be fed in under seven days, this could be an option but he didn't always think this would feasible, he said.

He would use beans in a grow ration with dry hay and corn and then substitute DDG with soybean. The DDG price would have to increase to around $195 to $200/ton to make soybeans feasible as an economic feed source, he said.

"I talked to several nutritionists and they said feeding soybeans could be an acceptable replacement (for DDG) in a growing ration," Schuhmacher said. "They did say too much rumen-degradable protein, however, would prevent it from being an efficient finishing ration."

While soybeans are piling up on some areas of the country, they're not generally available to all cattle feeders.

Schuhmacher said that while the Nebraska Sandhills he calls home aren't a hotbed of soybean production, he does have access to them as a feed source. The local soybean price is around $6.70/bushel currently in his area, he said.

The North Dakota State University Extension report on feeding soybeans to cattle can be found at https://www.ag.ndsu.edu/… 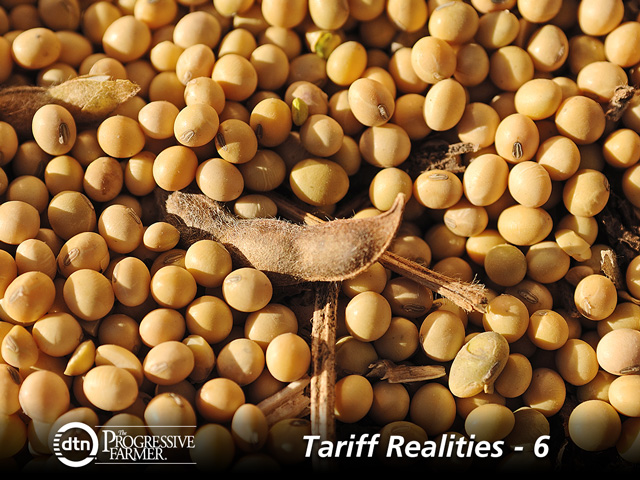