OMAHA (DTN) -- Heavy rains in the Western Corn Belt in June raised water levels in local creeks and streams, but also raised producers' agronomic concern levels. Chief among those concerns are nitrogen availability in waterlogged cornfields and weed issues, particularly in soybeans, which farmers will need to tackle once fields dry up enough for applicators to get across the soil.

June has been extremely wet across the Corn Belt. The heaviest hit area is from central Iowa, north to southern Minnesota, and then west to northeastern Nebraska and southeastern South Dakota. The Midwestern Regional Climate Center estimates anywhere from 12.5 to 15 inches of rain fell in this region from June 1 to June 25.

DTN Senior Ag Meteorologist Bryce Anderson said you could make a rough rectangle from U.S. Highway 81 on the west to the Lake Michigan on the east with the northern boundary Interstate 90 and U.S. Highway 20 on the south as the area that saw the heaviest rain in the last two weeks. Areas in this region received around a foot of rain in June, he said.

"In Iowa, the heaviest has been in northwest and north-central Iowa, and in Minnesota southwest, but generally the entire southern one-quarter of the state about two counties from the Iowa line," Anderson said. "And then southeastern South Dakota from Yankton to Brookings -- that triangle has gotten hammered."

It had been a challenging spring even before the heavy rains in June, said Mark Nowak, a corn and soybean farmer and ag consultant based in Wells, Minnesota. His area got 6.5 inches of rain in May, or about double the normal precipitation, which delayed corn and soybean planting.

That continued into June; he has received 8.26 inches of rain so far in the month. This, too, is about double the amount of rain his region normally gets and crops are showing signs of deterioration with yellowing of corn, he said.

"My concern is a shallow-rooted crop that will not find enough nitrogen when it is really needed in the next 40 days," Nowak told DTN.

Nowak expects to see an abundance of high-clearance sprayers applying nitrogen in his area in the coming weeks. Some farmers, however, will hope for drier and warmer weather for the roots to go down and find the leached nitrogen, he said.

To examine potential loss, DTN asked fertility management partner Adapt-N to examine rainfall and predicted losses in the region. Using an actual field in northwest Iowa, records show a total of 23.9 inches of precipitation for the year through June 28. Nitrogen model calculations showed the field could have lost about 48 pounds of N per acre from leaching, with up to 70 pounds lost due to rain and volatilization losses because of weather earlier in spring. Using estimated nitrogen applications, the Adapt-N model showed 143 acres of the 199-acre field could benefit from 45 pounds of additional actual N.

Jay Magnussen, a farmer and agronomist located in Paullina, Iowa, said he has about 15 orders on his desk to do nitrate tests on cornfields once fields dry up in northwestern Iowa. On June 1, most of the fields he worked with in the region had pretty good levels of nitrogen.

With anywhere from 10 to 12 inches of rain that fell since then, Magnussen isn't sure how much nitrogen remains. The region has heavy soils that normally don't leach nitrogen compared to lighter soils, he said.

"We could have some denitrification in flooded areas, but I don't know how many will be willing to spend more money when cash corn here today is $3.29/bushel," Magnussen said. "We might have a few guys who are borderline who might apply some extra."

Clarke McGrath, Iowa State University Extension on-farm research and extension coordinator/agronomist in southwestern and west-central Iowa for the Iowa Soybean Research Center, said producers considering whether to apply more nitrogen are in a tough spot. Loss calculations are estimates, while the costs of applying more N are quite real.

"You need to have rain to incorporate the nitrogen and what if it stops raining?" McGrath said. "Or worse yet, what if it keeps raining and what you just applied is lost again? There just are not easy answers."

Another issue for farmers in these affected areas is their ability to spray their soybean acres. With the wet conditions, farmers haven't been able to spray their fields so weeds are going to be taller than normal when they do get sprayed.

Nowak said very few soybean acres in his region have been sprayed, as it has been too wet for the last 10 to 12 days. Fields that didn't get a pre-plant or post-emergence chemical are seeing yield-robbing weed pressures, he said.

Large broadleaves like water hemp, giant ragweed and lambsquarters will be tough to kill. Nowak said the Minnesota Department of Agriculture turned down a request from farm groups, including the Minnesota Soybean Growers, to extend soybean dicamba spraying after the set date of June 20.

Magnussen said there is going to be no timely herbicide applications to soybeans in northwestern Iowa this growing season. Many applications will be pushing or exceeding the herbicide label requirements on maximum weed size, he said.

"There could be weedy beans this fall come harvest time," Magnussen added.

The issues with too much rain extend west into Nebraska and could even affect livestock producers.

Aaron Nygren, a University of Nebraska-Lincoln (UNL) Extension educator for Colfax County in east-central Nebraska, said those in the region with manure holding ponds from cattle feeding facilities are going to be forced to empty these ponds earlier than normal. The recent rains have filled the ponds. In most instances, they will empty the ponds through center pivot irrigation systems.

Depending on the salt content of the manure, it can be applied to standing crops without any issues, according to Nygren.

"We probably won't have to irrigate much with so much moisture in the profile in the coming weeks, but those with feedyards will run the pivots to lower the levels of those holding ponds," Nygren said.

The University of Minnesota has a page about the heavy rains and excessively wet field conditions. Read it at http://blog-crop-news.extension.umn.edu/… 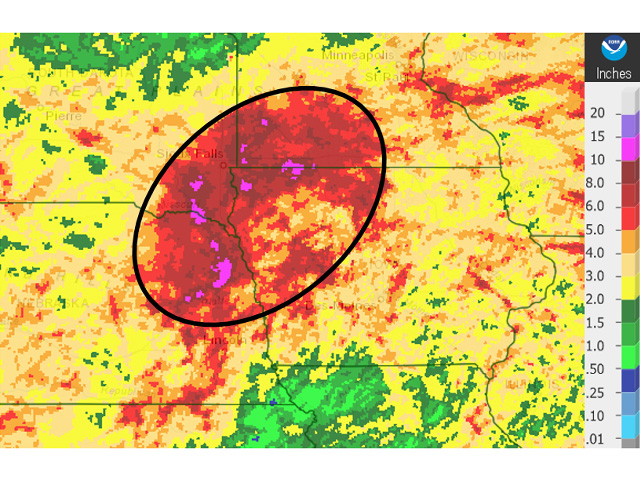