OMAHA (DTN) -- With drought conditions firmly entrenched in much of the Southern Plains, the region's cow/calf producers might want to consider using the limit-feeding method to keep their cows fed, while also keeping feed costs in check, according to one livestock expert.

In a May 25 Great Plains Grazing webinar titled "Limit-Feeding during Drought," David Lalman, Oklahoma State University (OSU) Extension beef cattle specialist, said that usually the best management practice during a drought is to limit the number of animals to avoid overgrazing. Having to buy feed in this situation is usually fairly expensive, Lalman said.

However, the system isn't for everyone, as it takes more feed management, labor and equipment. However, it can help producers control the costs of expensive forages that have to be fed during times of drought.

Limit-feeding is a management practice that limits forage needs to somewhere around 25% of normal amounts during a drought, according to OSU research. This can help producers maintain core genetics in their cow herd rather than having to sell cattle to prevent overgrazing. The feeding strategy also works well when the price of concentrate feed is inexpensive, as it is now, Lalman said.

"Forage and hay is limited in the Southern Plains," Lalman said. "It's hard to find and it's expensive right now."

Lalman said feeding cow/calf herds a concentrate-feed diet in a dry-lot situation does have a fair number of advantages.

Limit-feeding is a flexible system and takes the pressure off of pastures during times of drought. The method increases digestibility anywhere from 4% to 8%. Activity in dry lots also decreases from 10% to 20%, as cattle don't have to walk for long distances for water. The feeding method also enables producers to use a broad spread of technologies, including artificial insemination, synchronization and feed additives.

However, Lalman said there are some other considerations that may make this system impractical for some producers.

For starters, much more management of cattle is needed, the OSU research found, Lalman said.

Lalman said crude protein levels for a lactating cow in a grazing situation are normally around 11% to 12%. In the limit-feeding system, it is higher at 17.5%, he said.

"We feed every morning at the same time, although you can split it in half and feed in the morning and afternoon," he said. "You have to feed at the same time every day, otherwise you are asking for problems."

Roughage and concentrates can be fed together or separately. In limit-feeding, the goal is to limit the amount of forage fed, so free-choice feeding of roughage just will not work, he said.

In their research, OSU fed a dry ration of concentrate feeds to cattle, Lalman said. The ration had only about 8% to 12% moisture, and researchers noticed the cattle would pick through the feed and eat the moist feed first.

In order to solve this problem, OSU researchers added liquid molasses at 7.5% moisture to the dry ration. They also added some water to the ration to make it moister, he said.

Lalman recommended that livestock producers considering using the limit-feeding program should consult with a nutritionist to establish a ration that provides cattle with what they need to thrive in a limit-feeding situation.

Other considerations are the additional facilities and equipment that will be needed for feeding cattle.

Lalman said pens will be needed for the cattle, as well as some sort of storage facility for feed. More feeding equipment, including feed wagons, tractors, loaders and bunks, will also be needed, he said.

Cows need 30 to 36 inches of bunk space, and more if calves are not being fed in a creep area. OSU researchers fed calves the same diet, and free-choice creep-feed calves gained about 3 pounds a day.

"You have to watch the calves in this system, as they can become fleshy after 90 days on the creep feed," he said.

Lalman said calves are typically weaned from 120 to 150 days. However, they don't have to be weaned in this range and can be weaned later, he added.

When asked about the rate Southern Plains cattle producers are adapting the limit-feeding system to their operations, Lalman said they have been fairly slow, as there are some high costs involved in improving facilities and purchasing feeding equipment. However, some producers already have some of these items, so by adding a few more things, they could successfully implement this system, he said.

Lalman said the research shows limit-feeding will produce a major feed savings, but it takes some effort and good management. 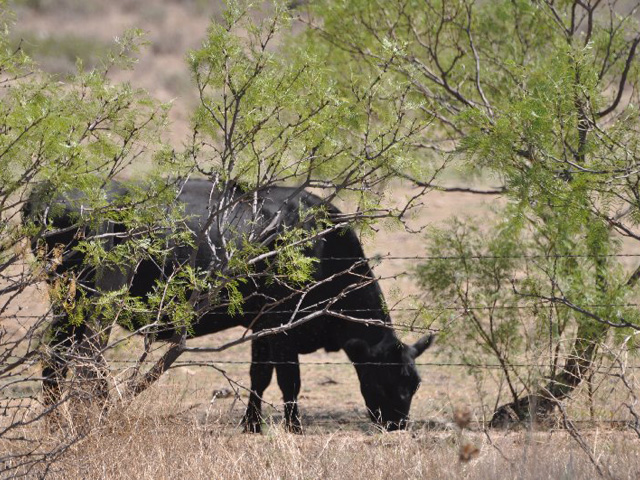