OMAHA (DTN) -- Karl Jacobson, like many farmers in drought-affected areas, wants it to rain. The Concordia, Kansas, farmer has only seen two inches of rain fall on his north-central Kansas farm since November of 2017.

"We had very little snow this winter and more wind than I can remember this spring," Jacobson told DTN. "I guess we have the drought of 2018."

The severe drought gripping different areas of the Midwest has crippled agriculture in these locations; livestock producers are being forced to find alternative sources of water for their grazing livestock. Farm ponds, often the only source of water in pastures and rangelands, are drying up.

The drought has left many livestock producers scrambling to find viable water supply options once a natural supply of water is gone.

Herschel George, Kansas State University Research and Extension watershed specialist based in eastern Kansas, said there are a lot of different ways to provide water to grazing livestock. George and other KSU Extension specialists have developed approaches, many of which outlined in the KSU publication "Waterers and Watering Systems: A Handbook for Livestock Producers and Landowners."

George touts different ideas, such as solar pumps for ponds or wells. The downside to these systems is on cloudy days you have a limited amount of pumping time, he said.

Producers with battery backups can avoid these issues, otherwise the pump is not going to come on until 8:30 or 9 a.m. and it will stop by 5 or 6 p.m.

"I know out in central and western Kansas, solar pumps are being used more and more," said George in a KSU press release. "The systems are available and they're working well."

When a pond has already dried out, George said producers could clean it out so more water can be stored once it begins to rain. The downside to this option is it can be expensive to move slop and muck out of the existing pond, he said.

Jacobson said he has two pastures that he probably will not be able to utilize during the 2018 growing season on his Republic County farm. The pastures have ponds where he would water his cow/calf herd, but now they are dried up.

He said he might dredge one of the ponds this summer to hopefully allow the pond to store more water when the moisture returns. In the meantime, his plan is to let them sit this year and hope it rains.

Jacobson considered hauling water to the pasture for his cattle, but the pastures are located in remote areas. Hauling water that far would be an expensive and time-consuming proposition, he said.

"I sold off some cows recently because of the lack of grass and water," Jacobson said. "They were older ones, so they needed to go anyway, but I won't replace them until conditions improve."

Jacobson said his other option was to try to dry lot some of his herd, but this too could be an expensive enterprise with the increased amount of feed needed. He is also short on hay so he would have had to buy expensive hay; moving the cattle to town and selling them made more sense, he said.

To help protect existing or rebuilt ponds and water quality, George strongly recommended producers put a fence around the ponds. This will help to assure water quality if a tank downhill from the pond is provided for the livestock.

Any water that does remain may not be of the best quality, according to a North Dakota State University (NDSU) press release from May 4. Ponds and dugouts in North Dakota may be compromised by concentrated levels of salts, minerals and bacteria, stated Miranda Meehan, NDSU Extension livestock environmental stewardship specialist.

TDS measures salts, and these levels should be less than 5,000 parts per million (ppm) for most classes of grazing livestock, according to Michelle Mostrom, toxicologist in NDSU's Veterinary Diagnostic Laboratory. Elevated levels of TDS may be harmful to livestock health, she said.

Sulfate levels should be less than 500 ppm for calves and less than 1,000 for adult cattle, she said. High levels of sulfate can reduce copper availability in the diet, while higher levels of sulfates can also induce central nervous systems problems.

"Monitoring water quality throughout the grazing season is important because the quality changes in response to climate and environmental conditions," Kincheloe said. "The importance will be magnified if the drought continues into the growing season, especially when using a shallow water source with a history of water quality issues."

Many commercial laboratories and the NDSU Veterinary Diagnostic Laboratory provide testing for livestock water quality and specialized testing. The cost of a basic water quality test is approximately $25.

The KSU press release about natural water sources in grazing situation can be viewed at:

The NDSU press release about water quality can be viewed at: 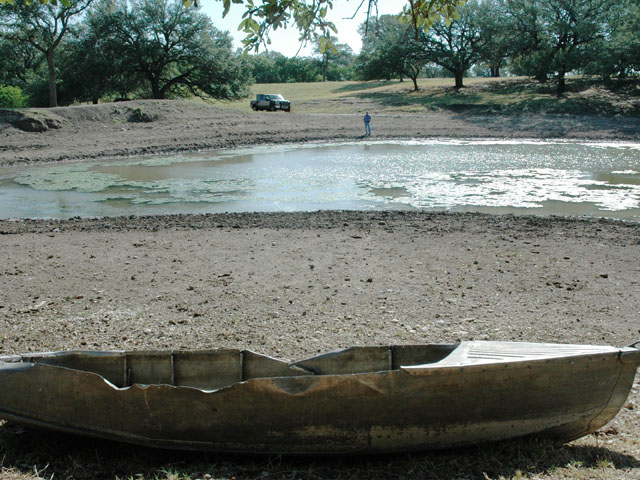