WASHINGTON (DTN) -- With a little bit of champagne, fresh-baked donuts and a tractor-trailer parked outside in downtown Washington, D.C., leaders from the Farmers Restaurant Group held a small, symbolic celebration of food deliveries, led by the National Farmers Union state affiliate in North Dakota.

Tuesday's event at the Farmers & Distillers restaurant near the old Chinatown neighborhood in Washington was meant to show restaurant guests that their food is coming from family farms as far away as North Dakota.

Truck deliveries from the Plains and Midwest are the next step for the farmer-owned restaurant chain. Trucks actually began delivering products last fall with images from the restaurants, bakeries and distilled liquor on the side of the trailer along with "American Family Farmers Delivery Food to Farmer-Owned Restaurants" stretching across the trailer sides.

"Now that we have got our restaurant concept up and running, this is kind of phase two where we are using the concept of fully integrating bringing products from family farms," said Mark Watne, president of the North Dakota Farmers Union. "So we start a truck in North Dakota and fill it up along the way."

Founding Farmers is owned by more than 47,500 North Dakota farmers. That's because the North Dakota Farmers Union, as an organization, owns just under 90% of the stock in the growing group of successful restaurants. Another 192 shareholders, most of whom with close ties to the NDFU, hold the other private shares in the chain.

It's that ownership by a farmer-led organization that makes Founding Farmers unique to the restaurant business -- and popular in and around Washington.

Farmers Restaurant Group was the culmination of leaders at the North Dakota Farmers Union trying to take the concept of "value-added agriculture" closer to the consumer. Back in the late 1990s -- another time of low prices -- there was a strong push for value-added agriculture, which often meant processing commodities in-state before they were shipped elsewhere.

Watne and his fellow farmers wanted to go directly to the consumer. They looked at the retail system and concluded the restaurant business would work better than grocery sales. The investment was risky, but a restaurant could tell a story about farmers. This actually became center to the restaurant chain's business model. As the website states, NDFU leaders were talking about the future in 2005 and were looking for a way to bring more products directly to the consumer. They also wanted to tell a story about how foods start on family farms.

The Founding Farmers restaurants was almost an early failure nearly a decade ago until the farmer investors changed course and took better advantage of their family farmer brand to become one of the most popular restaurant chains in the nation's capital. A sign over the front door of each restaurant states, "Proudly owned by the North Dakota Farmers Union."

Roger Johnson, president of the National Farmers Union and a North Dakota native, was an original investor, which started with a minimum early stock purchase of $2,000. Original investors are offered the first option to invest in any new restaurant. Working in Washington, Johnson has been able to see the restaurants start to mature.

"We're still kind of early in this thing," Johnson said. "It's like any new business. It takes a while to turn it into something."

The truck on Tuesday was bringing wheat from North Dakota, sugar from the Minn-Dak Farmers Cooperative, as well as grits and corn flour from Kentucky.

"We're looking at dairy products and lots of other items coming out here that are fairly well-connected to the family-farm system," Watne said. "So this is the early stages of phase two to get the distribution system to function."

At National Farmers Union board meetings, Watne said, he hands out forms on prospects for future items to deliver, such as cherries out of Minnesota when the season hits.

"We get a lot of calls and we have to sort through them," Watne said. "A lot of times, farmers are used to selling a retail product and we have to buy at a wholesale level because of cost and transportation. We're sorting through that because we need a certain amount of consistency and a little more long-term commitment. We can't just pick up a three-day supply of something because we can't hardly adjust the menu."

Watne added, "We can do something that's seasonal, but we prefer right now to find something that can supply for a longer period of time."

The truck is now running close to twice a month, which would allow the restaurant group to justify the costs of a truck if it can consistently run at least that often.

Farmers Restaurant Group opened its seventh restaurant, another Founding Farmers, last month in Reston, Virginia. Six of the restaurants are in the D.C. area while another one is located in King of Prussia, a suburb of Philadelphia in Pennsylvania.

"It takes seven restaurants to fill the needs and the quantity that it takes to justify the truck," Watne said. "But the plan is to add more trucks as we continue to develop."

"That's probably a little more aggressive than we will get, but we plan to open one or two more restaurants every two years," Watne said.

Dan Simon, a restaurant consultant who helped build the farmer-owned brand of the restaurants, said the bakery and distiller components tied to different restaurants have helped expand the original concept and resonate with restaurant guests.

"The purpose of today was to connect the original North Dakota vision into Washington, D.C.," Simon said. "It's about the farmers that produce the products and the restaurant and the guests who enjoy the products."

The restaurant chain also has a philanthropy mission in D.C., by working with a group called DC Central Kitchen that does job training for restaurant work with underprivileged people. "So every time the truck comes, it is donating some of that product to DC Central Kitchen, and then our restaurant managers and myself are donating our time to teach some classes and provide lessons, bring in interns," Simon said.

The relationship with Farmers Union also has educated Simon on the farm bill. The restaurant leaders also work to educate staff -- and, in a small way, the customers -- about issues such as the farm bill without being heavy-handed.

"We get to talk about these messages, and it's hard to measure, but when you see 50,000 a week between all seven restaurants, you are planting seeds with them," Simon said.

NFU was among the strongest advocates for country-of-origin labeling for meat, which was repealed by Congress after a World Trade Organization ruling and industry rejection by major meatpackers and groups affiliated with meatpackers. Watne said the restaurant seeks to educate consumers about the origins of their products.

"This is us trying to get that labeling concept out through the marketplace, and that is key," he said.

When the restaurant was started, there were questions whether it could truly do an education component without beating people over the head while they are eating. "But we have been subtly getting our message out about farmers," Watne said. "We're surprised. I'll be traveling the country and hear people talking about these restaurants just randomly." 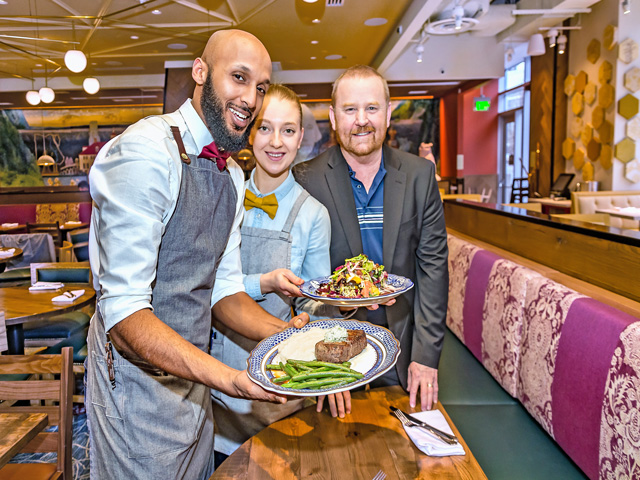