-- Planter maintenance and settings are important for proper seed replacement.

-- Uneven soil moisture in the furrow can contribute to variable emergence.

-- Plants delayed by two or more leaves tend to have small or no ears at harvest.

DECATUR, Ill. (DTN) -- There's a lot of body-folding required to reach the furrow when you're lanky like Jeff Brown. But, each spring, this Blue Mound, Illinois, corn farmer drops to his knees and puts nose to the row to watch for those first spikes to emerge.

Brown's goal is to get as many corn plants popping from the ground as possible within 24 hours. "You take potential of the corn as soon as you open the seed bag," he said. "Those first 10 to 14 days are so vital to setting yield potential."

Many agronomic practices and environmental factors lead to uniform emergence in a corn crop. And, truthfully, there's not a lot you can do this year to turn around a mediocre stand unless the field is a legitimate replant candidate.

Brown's eye is on next year. The practice of selecting a representative sample of the field and flagging plants as they emerge is a simple and very visual diagnostic tool.

"When other growers say they want to increase yields, this is the first thing I suggest, because it costs nothing, and you learn so much," said Brown, a National Corn Growers Association (NCGA) yield contest champion who, besides farming, is also a territory manager for The Climate Corporation, a division of Monsanto.

When Brown began this flagging exercise several years ago, he suddenly found he started focusing more on planter settings, such as getting just the right amount of downforce and checking for worn seed openers.

But, mostly, he became an intense weather watcher. "I became more aware of the need to plant on the right day and not just because the neighbors are planting.

"I've learned to be more patient and to wait if there's a weather front moving in. That's so hard if all things point to go, but I've seen imbibitional chilling from a cold rain knock 10 to 15 bushel off a crop," he said.

Generally, even with all the tweaking, Brown sees plants emerge in three stages -- what he calls right, almost right and wrong. "About 70% of the stand tends to come up together. Another 20% breaks the surface a day or two later."

The last 10% to emerge will have tiny ears or be barren, he noted. "If you've got a field with a lot of three-leaf corn mixed with a lot of one-leaf stage, that's a problem. Most times, I'd prefer that last 10% didn't even come up."

Fred Below, a University of Illinois crop physiologist, agreed that rapid, uniform emergence is very important for high yield. "The plant that comes up three or four days later is going to have a smaller ear," Below said.

Like an Olympic runner that bolts from the blocks first, early risers simply have a head start. "It's all about competition," he said. "Those coming up first use the water, the nutrients, the light and other resources faster."

The answer on how much yield is lost depends on the ear type and weather. Below's own research plots have shown variable yield results when measuring emergence. "But, the one thing that is consistent is those later emerging plants always yield less," he said.

An Iowa State University review of research literature on corn emergence around the world (https://crops.extension.iastate.edu/…) concludes the yield loss from the "late" plants is not made up by the "normal" plants.

Below hypothesizes that heat units are gauged to growth stages, and plants that emerge first soak up more heat units and, therefore, are more competitive. "Usually, if you dig up the plant that is way behind, it was planted at a more shallow depth," he observed. "Not always -- sometimes it's crappy seed or an insect, but it typically had less moisture or perhaps sensed the cooler temperature of the above-ground air because of uneven planting depth."

Being the runt continues to be problematic later in life, too. In some cases, late-emerging plants are more vulnerable to silk clipping by corn rootworm beetles. Severe silk clipping that occurs early in the pollination process can interrupt pollination and reduce kernel set on the ears.

Some studies have shown late-emerging plants have higher grain moisture content at harvest. Late plants can also be more prone to lodging because of smaller stems, weaker stalks and fewer brace roots.

Ever walk into a field later and see erratic ear set? Below said that's another good visual indication emergence was variable.

While getting every plant to emerge together is an admirable goal, Below said two to four days is probably more realistic. What worries him most is when corn sits stalled in cold soils. "It almost never will come up uniformly," he said.

Brown got a chilling reminder of that fact during the 2017 season. "We stopped planting 48 hours ahead of a cold forecast in late April, but the cold and wet just lasted too long," he recalled. "Fields replanted in June yielded 30 bushel better thanks to warmer soils and better emergence," he said.

Still, emergence remains Brown's first clue as to whether he should keep that stand or replant. An evenly emerged crop also affords a peek at what yield is possible and the confidence to invest in additional inputs.

The nonirrigated field that earned Brown first place for Illinois and a national third place in the 2014 NCGA yield contest hit 350.4 bushels per acre.

"That corn never did have a bad day," he explained. "Every stalk and ear looked like it came out of a factory exactly the same. It shows the potential is there if you can get it started off right."

Some tips on how to flag emergence.

DECATUR, Ill. (DTN) -- Jeff Brown looks for corn to spike at about 85 growing degree units (GDU), depending on the vigor of the hybrid. From beginning to end, he prefers to see an entire field emerge within 10 GDUs of one another.

It is a formula he learned from NCGA corn yield champion Randy Dowdy. "Randy is famous for saying trust but verify," Brown said. "I can trust from watching the monitor that my precision planter is doing its job, for example, but I verify it is true by studying my own field," Brown said.

Here's how to flag emergence:

-- Place a colored flag beside the first set of corn seedlings as they spike.

-- Return to the field 12 hours later, and mark the next group of emerged plants with a different colored flag.

-- Return every 12 hours to mark the subsequent waves of emerged corn plants until the test row is fully emerged.

-- Harvest the plants according to color, and record the weight and yield differences to verify if emergence mattered. 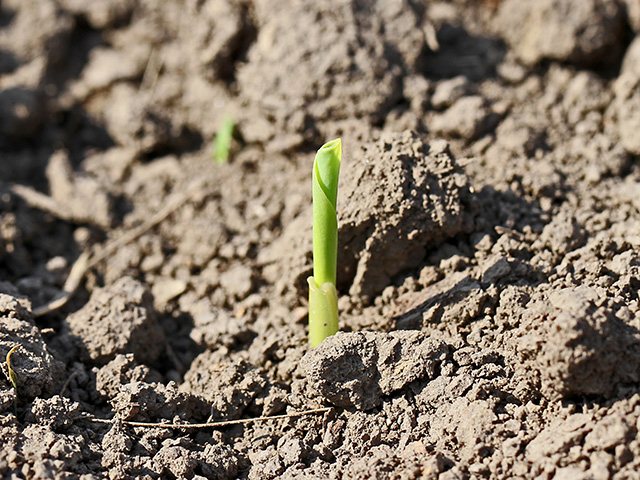