MEAD, Neb. (DTN) -- Kerry and Angela Knuth were a little hesitant to delay planting and shift to shorter season corn hybrids -- all for the sake of cattle grazing a spring cover of rye. They're starting to see the benefits and possibilities, though, thanks to a University of Nebraska-Lincoln (UNL) project.

Part of the Beef Systems Initiative program, created November 2016, the Knuths' land was included in a project that looked at the impact of grazing spring rye on subsequent crop yields.

The rye was sprayed and killed at planting time, and corn was seeded in both fields in early May. Corn yields ranged from 189 to 211 bushel per acre last fall.

"We are not cattle folks at all, but there are benefits to the soil by allowing them to graze," Kerry Knuth said. "The spots where manure was, the corn grew like crazy."

Knuth also noted, in the strip where rye was planted, there appeared to be more moisture in the soil. This created a better planting bed. He lessened the down pressure in his planter, and set his closing wheel out more as the seedbed was softer than usual.

Concerning the later planting date, Angela Knuth said they believe a specific date on a calendar is no "magic bullet" and that many other factors matter when it comes to success in crop production. She pointed out their best corn yields came in 2016, a year when their last fields were planted on May 22.

The Knuths did their homework on what hybrids to plant after the rye crop. They selected a 103-day high yielding corn hybrid. Despite not planting as early as they might have in the past, the positive effects on their soil from using cover crops and allowing them to be grazed seemed to far outweigh the negatives.

The Knuths' farm will continue to be a site for this cover crop study for one more season, beginning this spring. Cold weather this year, they said, has meant the rye crop hasn't grown as much as it did last year by this time. Being at the mercy of Mother Nature shows the importance of flexibility when using cover crops, Kerry Knuth stressed.

Based on what they've seen, these long-time row crop producers said they would definitely be willing to partner with a cattle producer in future years. They said there are clearly benefits to seeding and grazing cover crops.

"Like I said," added Kerry Knuth, "we are not cattle folks, but we like the positive aspects of cover crops." 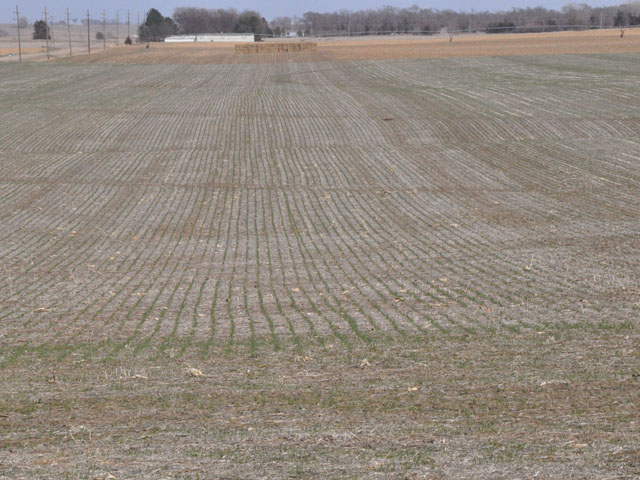