At a recent farmland investor conference in Des Moines, it was standing room only with about half of the 675 people at the event from outside the state of Iowa.

On average, values for all types of farmland in the Kansas City Federal Reserve district declined only 3% from a year ago. Looking ahead, bankers in the district expect values to remain steady in 2018. The Chicago Federal Reserve Bank in November reported farmland values plus or minus 1% across that district.

"Buyers are looking for stable income, and farmland has traditionally delivered that stability," explained Doug Hensley, president of Hertz Real Estate Services in Nevada, Iowa. "In every county there are a number of farmers who are financially capable and open to buy that 'good farm.' And as they say, you buy the farm when it's available, not when it's convenient."

Steve Bruere, president of Peoples Company in West Des Moines, agreed. "Eighty percent of the buyers are farmers. People will step up if a good farm is for sale. Farmers are still the aggressive buyers," said Bruere.

A competitive Hertz auction a week ago in Benton County, in east-central Iowa, brought $14,300 per acre for 176 acres with soils that have a projected corn yield of 220 bushels per acre, reported Hensley. "We had six or seven active bidders," said Hensley. The neighboring landowner beat out a contending investor.

Peoples Company tracks all public auctions in Iowa for farms that are 85% or more tillable. The company calculates the price based on a productivity rating to make it easier to compare equivalent values.

Iowa uses a CSR2 (Corn Suitability Rating-revised) rating system in which a rating of 100 is equivalent to a projected yield of 240 bushels of corn per acre.

In 2017, of the 685 farmland auction results collected by Peoples Company, the average price per CSR2 point was around $120. That means a farm containing soils with a projected yield of 200 bushels (83 CSR2) would sell for around $10,000 per acre. In the fourth quarter of 2017, farms sold at auction in Iowa were averaging $124 per CSR2 point. The January auction of the 40 acres in Dallas County equaled $127 per CSR2. The companion 134 acres at the same auction brought $111 per CSR2 point.

Still, these strong prices surprise many. "Most farmland investors have been waiting for a pullback in land values, which hasn't transpired yet," noted Bruere. In fourth quarter 2016, farmland auctions in Iowa were averaging $109 per CSR2. In first quarter 2017, they averaged $115 per CSR2.

"There's a fair amount of 1031-tax deferred exchange money still in active play across Iowa," explained Hensley, as development rings out from Des Moines and the Cedar Rapids-Iowa City corridor. "And farmland is a stable investment that gives buyers long-term confidence. Just about anyone you talk to thinks farmland will be worth more 30 years from now, so they continue to view farmland as attractive," Hensley added.

Most of the sellers are trusts that have inherited farmland, reported Bruere. "But we are seeing some profit-taking across the Midwest from land funds that formed in 2008 with a 10-year window. They now need to sell some land to return money to their investors."

There is some pressure from lenders on farmers who can't cash flow their operation. "But it's more of a suggestion rather than a forced sale at this point," said Bruere. Bank regulators don't like to see borrowers with carryover debt for more than a year or two, explained Hensley. So, there is some pressure from lenders who are "encouraging" sales but not enough to move the market.

The amount of farmland for sale is still tight. "Although strength in values is uneven from neighborhood to neighborhood," explained Hensley, "the areas with the most potential for softness currently are where we've had or seen multiple land sales in the past 12 to 18 months, and those previous sales have drawn capital out of the market. So, when it comes to futures sales in those same areas, sellers need to understand that there may not be as much competition for future sales. It all comes down to what happens to commodity prices, crop production success and interest rates."

It will be interesting to see if financial pressure on farm operators who own farmland increases, as March 1 cash rents come due and some borrowers need to scramble to find financing. Currently, there are only 150 farms, with 85% or more tillable land, listed for sale in Iowa.

"That's less than two per county," said Bruere, whose company tracks every listing in Iowa. For now, demand exceeds supply of farmland, especially on high-quality ground. Lenders and farm brokers expect that to continue, barring any unforeseen economic calamity. 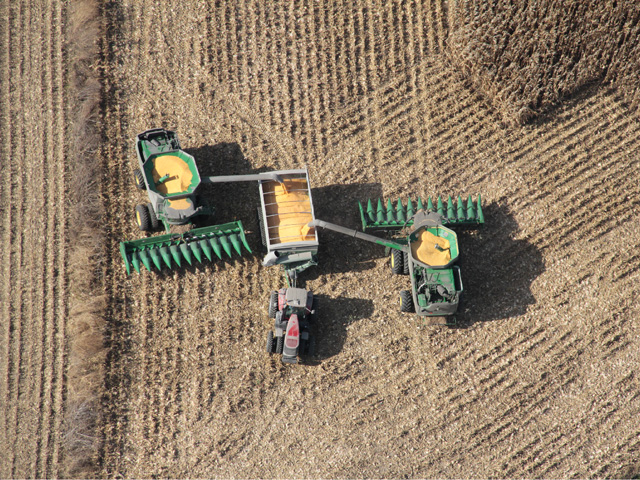