OMAHA (DTN) -- The chairman of the Commodity Futures Trading Commission told senators Thursday the Environmental Protection Agency hasn't been able to provide the CFTC with enough quality data on the biofuels trading market for CFTC regulators to properly analyze the market.

Chris Giancarlo, who took over as CFTC chairman last August, testified before the Senate Agriculture Committee in Washington, D.C., about some of the current challenges in the commodity futures market. Biofuels, cryptocurrencies, convergence and the European Union were among the main themes throughout the hearing.

Senators asked Giancarlo about what the CFTC has been doing to examine the renewable identification number (RIN) market used by EPA to regulate oil refinery compliance with the Renewable Fuel Standard. Both the oil industry and biofuels industry have claimed speculation and manipulation affect the volatility of RIN prices.

"Based upon the data, we were not able to find any misbehavior in the market, but the data was both limited and not of sufficient quality," Giancarlo said. "We're a data-driven agency, and analyzing bad data, you don't necessarily get good results, generally."

CFTC staff had a conversation with EPA staff about the data. Giancarlo said he also spoke recently with Agriculture Secretary Sonny Perdue about issues with transparency in the RIN market.

"We agreed we're going to put our best economists on taking a look at this, and they are going to be meeting in the next few weeks," Giancarlo said.

Giancarlo advised EPA that its RIN data wasn't adequate for the CFTC to examine the market for the presence of manipulation. Sen. John Thune, R-S.D., was among those encouraging the CFTC to offer more analysis on the RIN market.

"So, more and better data would help?" Thune asked. "We hope that you're a part of providing advice on that subject. Obviously, there is a lot of controversy and discussion around it."

Senators also had a lot of questions about cryptocurrencies and blockchain, the technology behind Bitcoin. Senators pointed to the use of blockchain to make commodity trades now. Giancarlo said blockchain is coming quickly into the markets. Blockchain creates a digital ledger of transactions and vital information to those sales. Giancarlo said more agricultural companies are adopting the techniques, as are companies in the rail transportation system.

"The potential of this technology is truly transformative," Giancarlo said. "Now, what it will take to realize it, and how it will be realized and how long it will take, those are open questions. The more I read about it, the impact that it can have on so many of the traditional systems that we realize, whether in finance, whether in logistics, (or) in transportation are extraordinary."

But Bitcoin and markets like it present new challenges for regulators, Giancarlo said. The concept behind such digital markets is the decentralization of information and the bypassing of central authorities that countries traditionally have used to verify information. The CFTC just had a long meeting to better understand the emerging technology.

"It is such a fast-moving area that I think the critical thing is we have to be learning, watching and understanding every step of the way," he said.

From a regulator's view, the CFTC relies on exchanges and data repositories. The traditional role of financial regulators is to verify those agencies to play a role in the financial system and regulatory framework.

"So it presents tremendous challenges for us and our traditional ways of regulating," Giancarlo said.

Bitcoin and other cryptocurrencies are legally traded products, but there is no federal agency with direct regulatory oversight over those spot markets. There is no agency setting standards, capital requirements or best practices for customers, Giancarlo said. The CFTC does have authority to enforce laws on fraud and manipulation, but the CFTC has had little or no access to data to make those calls. To create a Bitcoin futures market, Giancarlo said, the CFTC entered into an arrangement with the two exchanges offering Bitcoin products to start gathering data on the five current Bitcoin spot markets.

Sen. Heidi Heitkamp, D-N.D., questioned whether companies would move to cryptocurrencies to avoid taxes. Taxes are due on such transactions, and 1099 forms should be issued on the gains and losses of sales. Giancarlo said he did not know how much that was being enforced by the cryptocurrency exchanges. "My suspicion is not to a great extent," he said.

A percentage of the cryptocurrency trade is also used for laundering money. Giancarlo said there are broad concerns about the illegal use. This again raises the question of "Where do we go next?" in developing some oversight by the cryptocurrency industry.

Legislation also is pending in the European Union that could create a new regulatory framework for commodity clearinghouses. Giancarlo said his agency is working with the EU on maintaining cross-border equivalency, but the CFTC "is very concerned" that the European Union will want the ability and right to do "unscheduled, independent exams" of U.S. clearinghouses as well as require U.S. exchanges to meet European standards and practices.

"I know of no other area where an overseas regulator can come into a U.S.-regulated environment and conduct their own independent exams -- or even if they proposed to do it in conjunction with us, that's not our legal structure," Giancarlo said.

CFTC officials will be meeting with other regulators next week in Europe. Giancarlo said his agency will make it clear to EU officials that U.S. clearing houses and markets will be regulated under American law by American regulators. That is the position the CFTC will continue to maintain.

"We don't report to overseas regulators," Giancarlo said. "And the dimensions of what could come out of this proposed European legislation could be quite breathtaking."

Senators also questioned Giancarlo about problems with convergence between the futures contract and the daily cash spot markets. Cattle producers over the past few years have raised questions about the CME fed cattle markets. Giancarlo acknowledged there were problems.

"The cattle market has been a concern of mine for quite some time," Giancarlo said. "It became quite clear to us over the last few years that there were some convergence issues in that contract and other problems."

Giancarlo credited the CME for taking steps to restructure the cattle futures contract and improve it.

"As of last year, it looked like they were addressing a number of concerns of the cattlemen," he said. Giancarlo said there still may be some issues. He said it was important for the CFTC to keep an eye on how the agricultural contracts are working and let clearinghouses such as the CME know their responsibilities to keep trading contracts fresh and updated. "That needs to be done frequently. These contracts need to be looked at because they serve our ag users."

Giancarlo was also asked about the lack of convergence in the hard red winter wheat contract. He said CFTC staff just recently met with staff from commodity exchanges and the National Grain and Feed Association. The upcoming March contract for hard red winter wheat is one of the most-used contracts, and CFTC staff will be looking at the close of the March contract to determine whether there is a broader problem, he said.

OMAHA (DTN) -- The chairman of the Commodity Futures Trading Commission told senators Thursday the Environmental Protection Agency hasn't been able to provide the CFTC with enough quality data on the biofuels trading market for CFTC regulators to properly analyze the market. 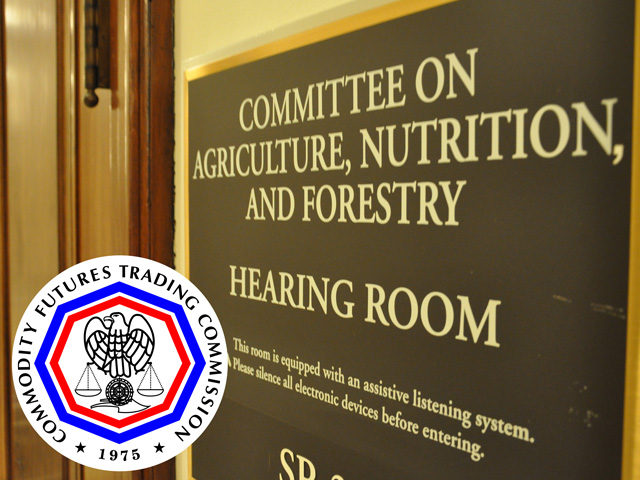