New Orleans (DTN) -- Similar to the phosphorus outlook, the global potash (K) outlook looks to be fairly balanced in the near future. Potash prices have trended upward since mid-2016, but remain below prior peaks with no severe supply/demand imbalance forecasted.

Josh Paula, market and strategic analysis manager for The Mosaic Company, said during the potash outlook presentation at the Fertilizer Outlook and Technology Conference in New Orleans in mid-November that global shipments of K have slowed in recent years. Despite this, potash demand is projected to grow 3% per year during the next five years.

The oversupply situation in 2014/2015 pushed the potash price lower during that time, he said.

"Another important factor was key potash export currencies, particularly the Russian and Belarussian ruble, collapsed with the price of oil in 2015," Paula said.

However, global potash prices have trended higher since the middle of 2016 with decent demand growth and no immediate threat from new capacity, he said.

A couple of things are driving demand growth.

Paula said record harvests have removed a large amount of nutrients from soil across the world. In addition, plant nutrients remain affordable, so more farmers are willing to apply more fertilizers.

Increased shipments are due to strong broad-based demand growth from across the globe, led by two countries in particular, Paula explained.

Paula said potash imports in Brazil are up 14% from January to October in 2017 alone. Steady increases in soybean production and decent farm economics, despite the stronger real, have pushed potash demand upwards in Brazil.

Several factors, such as record crop production year after year, efforts to improve its K balance, and a big import recovery in 2017 combined with gains in domestic production, have all come together to see demand grow in China, he said.

Potash shipments to North America will be typically rangebound after a few volatile years driven by weather and fill program timing, Paula said.

Meanwhile, India is having an interesting situation with potash shipments.

Potash shipments into India recovered to just under 4 mmt in 2016 and the 2017 estimate is just under 4.5 mmt. The 2018 forecast at just over 4.5 mmt. A recovery has been slow with shipments still not back where they were, he said.

Growth will be driven by increases in shipments, led mainly by India and China. India could see a 6.1% increase in potash shipments from 2016 to 2022, while China's growth could be around 4.1%.

"There are several factors to watch that affects the potash outlook," he said. "Agricultural commodity prices is a big wildcard in this."

Paula said other factors that could affect the outlook are the ramping up of new capacity, industry consolidation, demand in such countries as Africa, the former Soviet Union and India, key exchange rates and various government policies. 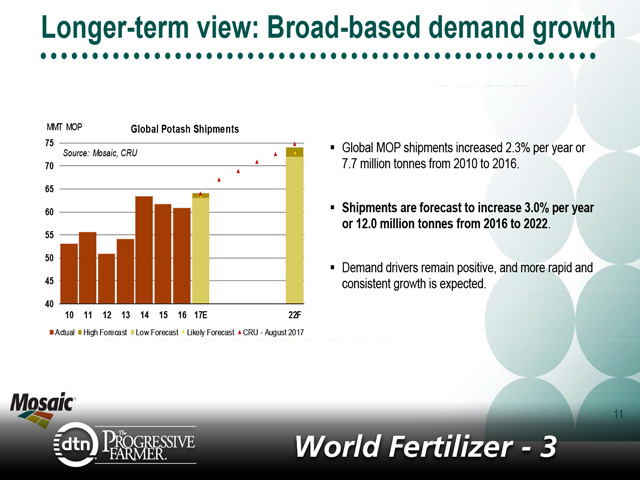