NEW ORLEANS (DTN) -- The global nitrogen price pushed higher in late 2017 after years of being stagnant to lower. This situation, however, is threatened by new capacity, especially from the U.S. The extra capacity could limit how much prices can climb, according to a presenter at the 2017 Fertilizer Outlook and Technology Conference held in New Orleans in mid-November.

Luke Hutson, head of urea and nitrates analysis for Fertecon, based in London, said nitrogen prices globally have increased since about August. Production has been down in various manufacturing locations across the world, he said.

Another reason why global nitrogen prices rose in recent months is because China exported less urea in 2017 because of high production costs within the country, Hutson said. Chinese total fertilizer exports should be around 4.9 million metric tons (mmt) in 2017, down from previous years.

"One of my take-home points is there will be lower Chinese exports in 2017, and we expect this trend will be around through 2020," Hutson said.

While China is set to produce less fertilizer, the same can't be said of the United States.

U.S. urea exports skyrocketed from 2016 to 2017, thanks to new supplies that came online in the country in the last year. Urea exports in 2016 were more than 50 mmt only once, in August that year.

"This is not a mistake this chart," Hutson said.

The reported destinations for the exports include Canada, Mexico, Chile, Brazil, Nicaragua and Costa Rica.

The U.S. UAN capacity is also on the rise, due to new supplies being released into the market.

Hutson said this additional capacity will cause major shifts in the U.S. UAN balance.

U.S. UAN imports are projected to fall, while exports are expected to reach around 1.5 mmt by 2020. The latest projections show the U.S. will be a net exporter of UAN between 2020 and 2025, but this could actually happen even sooner, he said.

He specifically cited two new facilities in the U.S. The OCI Iowa Fertilizer Company facility, which opened in Wever, Iowa, in 2017, should produce 1.4 million tons of UAN a year; the CF Industries facility in Donaldsonville, Louisiana, which went on stream in 2016, is producing 1.5 million tons a year.

The higher level of U.S. UAN exports also has an effect on the global UAN trade, Hutson said.

There will be more U.S. exports to Latin American and Europe, and they should help stabilize volumes from China to the U.S. West Coast. Russia will export less to the U.S., and other countries such as the Ukraine could take in more Russian UAN.

Hutson said with the increased amount of nitrogen supply seen in recent years, there needs to be a balance between global supply and usage. According to forecasts, the global nitrogen market could be in a closer balance in 2021-2022 as capacity additions slow, he said.

"It could be later if some of these additional projects are built," Huston said.

Another important theme of the nitrogen outlook is what happens in the coming years to the countries who are key urea importers.

At the top of the list is Brazil, according to Hutson. In 2016, Brazil imported 4.7 mmt of the nutrient, and the forecast for 2017 is even higher, pushing to just under 5 mmt.

"The big theme of 2017 seems to be Brazil's insatiable appetite for urea imports," he said.

Brazil imports are forecast to decline some in 2018 to 2020, because of a domestic nitrogen project at Tres Lagoas, Mato Grosso do Sul. However, there is some debate about project delays, so some uncertainty remains about the country's domestic production.

India is also a large importer of urea. India's urea imports in 2016 and 2017 floated around the 7 mmt level, with stock fairly high in the country this year. The forecast for urea imports from 2018 to 2020 is closer to 10 mmt, as the country's nutrient-based subsidy scheme is skewed towards urea, he said.

Turkey is also becoming a more important player when it comes to imports. The country has seen a surge in urea imports in 2017 due to a nitrates movement ban being lifted in 2016. The county imported 2.3 mmt of urea in 2016 and around 2 mmt partially through 2017, Hutson said. 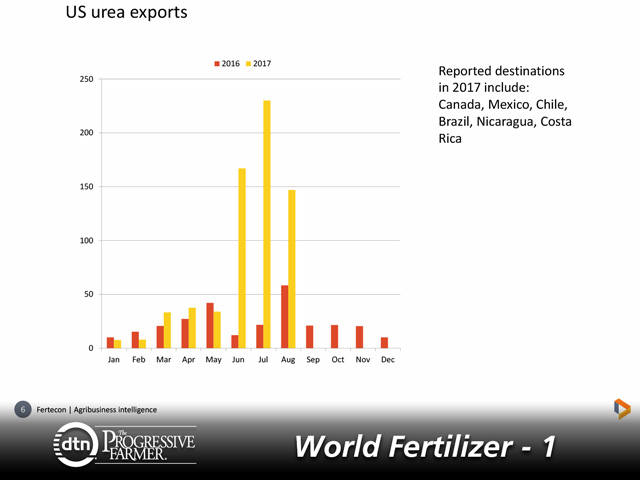