OMAHA (DTN) -- As farmers in Florida, Georgia and other Southeastern states brace for Hurricane Irma, farmers in Texas are dealing with the post-Hurricane Harvey impacts of flooded crops.

Among the issues facing farmers is how to treat crops that were in flooded fields. The Food and Drug Administration issued a notice warning that "if the edible portion of a crop" was sitting in floodwaters, it should be considered adulterated and not enter the human food chain. Such crops where the edible portion came into contact with floodwaters need to be destroyed.

FDA detailed some guidelines for evaluating crops where the edible portion of the crop did not come into contact with floodwaters, such as what the source of the floodwater was; what type of crop it is and what the stage of growth is; and whether conditions were such that the crop was exposed to moisture and stress over a long period of time. The FDA's full notice can be found at http://dld.bz/….

Given that so much of southeast Texas was underwater, the notice created a lot of confusion among southern Texas farmers, as well as grain and oilseed processors, said Jeff Nunley, executive director of the South Texas Cotton and Grain Association.

The FDA notice is not specific to cotton or field crops, but covers all types of food and animal feed. At least initially, the notice forced gins and crush mills to stop accepting cottonseed. The Texas Cotton Ginners Association issued a news release that some seed buyers were requiring their customers to certify that the cotton seed had not been exposed to flood waters.

After some conference calls on Thursday, the Office of the State Chemist in Texas has agreed to come out and evaluate the impacts Harvey had on cereal grains and oilseeds. The office will work with farmers and grain handlers to assess damages, which includes providing mycotoxin tests at no cost.

"Our desire is to provide legal certainty to the agriculture community and preserve market quality and integrity during the recovery process," said Tim Herman, the Texas state chemist.

To read the full statement released by the Office of the Texas State Chemist on Sept. 7, visit http://otscweb.tamu.edu/….

ADM confirmed to DTN it was accepting cottonseed at its Richmond, Texas, facility "as long as it meets FDA guidelines."

Most farmers are harvesting their crops even though the lint may be low in yield and quality. Farmers can still harvest cottonseeds

If early projections of cotton losses in Texas are correct, then Texas lost 750,000 bales out of a potential state crop of 8.8 million bales, or roughly 8.5% of the state's crop.

"A lot of growers were expecting a 3 1/2-bale to 4-bale crop, which many of them had contracted for 70 cents a pound," said John Robinson, an economist at Texas A&M. A bale of cotton weighs 500 pounds.

Farmers who have not already reached their crop insurance guarantee should also consider the lack of marketable cottonseed as part of their economic losses. Insurance adjusters largely appraise fields based on lost lint, not cottonseed. Crop insurance also pays on historical averages, not the projected loss in the field, Robinson noted.

"So, yes, it's going to hurt," Robinson said. "There's a big opportunity cost for not harvesting what they had out there before it got messed up."

The heavy rains from Harvey also reached a much broader cotton-growing area and likely hurt the quality of the cotton.

"What's essentially happened in a wider area because of rain from here to Tennessee is that a lot of cotton that had a lot of open bolls got rained on, and what that does is lower the color grades," Robinson said. "It just lowers overall grades and there are impacts of that that are captured in the local cash prices, in the basis. So, from that, there is probably going to be a shortage of really good quality from what there should have been. There will be an oversupply of less-than-optimal cotton."

The situation with crops and flooding is now set to repeat in Florida and other Southeastern states. USDA officials sent out radio commentary from Agriculture Secretary Sonny Perdue about the possible impacts.

"If Irma comes right up the middle of Florida, you've got your citrus and vegetables that moves on up into north Florida into Georgia, that's right in the heart of cotton and peanut country, and soybean and corn country," Perdue said. 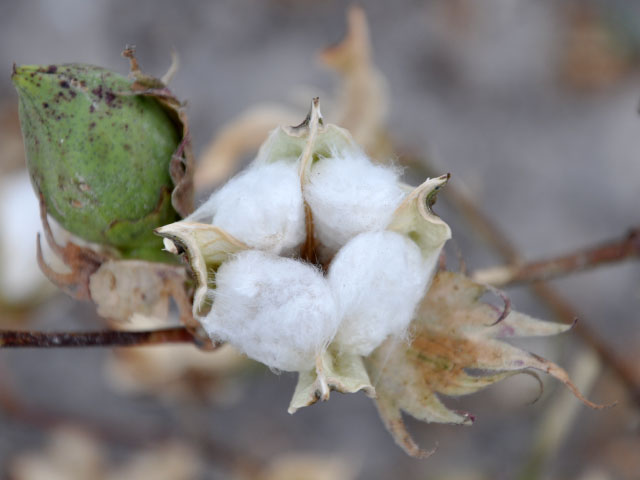