DENVER, Colo. (DTN) -- There have been more than a few jokes this week about the irony of weed scientists choosing Colorado as a meeting place to talk about resistance. However, no one in this audience is laughing about the global threat of weeds that no longer succumb to herbicides.

There are currently 479 unique cases (weed species x herbicide site of action) of herbicide-resistant weeds globally, according to the International Survey of Herbicide Resistant Weeds. Some 251 weed species have been able to outsmart chemical controls, and the real threat, scientists maintain, is that weeds have now evolved resistance to 23 of the 26 known herbicide sites of action and 163 different herbicides. Herbicide-resistant weeds have been reported in 91 crops in 69 countries.

The scope of this growing threat brought nearly 400 scientists from 28 countries to Denver for the Global Herbicide Resistance Challenge (GHRC). Man versus weed may ultimately play out within farmer's fields, but scientists in labs around the world are working to understand the pathways that allow weeds to resist controls. Herbicide resistance is a complex issue that mixes chemistry, biology, genomics, cropping practices, regulatory concerns, agricultural economics and even the marketing practices of agrochemical companies.

The first GHRC event was held in Perth, Australia, in 2014. DTN has attended both meetings.

University of Western Australia weed scientist Stephen Powles told the group meeting this week that weed resistance is no longer an academic question. "Some 309 million acres of the world's best cropland is infested with herbicide-resistant weeds in numbers that require additional control measures -- whatever those control measures might be," he said. "That's a threat to global food security."

Powles said a very conservative estimate is that weed resistance will cost growers an additional $12 per acre on top of their current weed control bill. That's a $3.75 billion global price tag for weed resistance, he added.

While weeds can also become resistant to mechanical controls, it is the over-reliance on herbicides without diversity that is the main evolutionary scenario for today's herbicide resistant weed populations, said Todd Gaines, a Colorado State University weed scientist. Weed scientists call a phenomenon Herbicide Only Syndrome (HOS) -- where herbicides are used to the exclusion of all other weed control tactics. American farmers, it seems, suffer most from HOS.

Stanley Culpepper, University of Georgia weed scientist, noted that herbicide-resistant weeds over the past 15 years have changed the face of agriculture forever. Palmer amaranth has garnered much of the press and remains a feared adversary, but ryegrass, waterhemp, marestail, ragweed and kochia are among the other threats, depending on the farm location.

Culpepper did observe that Georgia, where there is large crop diversity, has made some progress employing alternate technologies. Rolling cover crops, hand weeding and even tillage have been put into play. However, he remained concerned about growers putting pressure on new herbicide-tolerant technologies. The conference specifically addressed emerging resistance in auxin (dicamba and 2,4-D) and HPPD (isoxafultole, mesotrione, tembotrione) herbicides. Working groups are angling toward devising specific recommendations with enough teeth to help preserve those technologies.

Australia once led the world in herbicide resistance. Similar to other cropping regions, Australian producers universally adopted conservation cropping systems, resulting in herbicide reliance for the control of annual ryegrass (Lolium rigidum), which was initially established and adapted as a pasture species.

Michael Walsh, University of Sydney, said surveys of management tactics have allowed growers to gain ground on the problem. Walsh credited awareness of resistance issues, combined with the use of new and existing alternate weed control technologies such as strategic tillage and harvest weed seed control, are now being used by 43% of Australian growers. "Low weed densities will delay or even prevent herbicide resistance," Walsh said. "Low weed populations still need blanket treatments as we don't know exactly where all the weeds are. The next step is site-specific weed management."

Whether farmers in other parts of the world might embrace weed seed control systems remains to be seen. Farmers still yearn for the convenience and cost effectiveness of the past.

University of Nebraska weed scientist Greg Kruger said the biggest challenge he faces in educating growers is the balance of short-term versus long-term economics, particularly in a down economy. "For a young grower trying to make it to the next year, it can be difficult to carry out long-term solutions.

"We're seeing different weed species pop up with different problems," Kruger told DTN in an interview. "We can tie those problems back to herbicide use patterns and the way we've used the chemistries in the past.

"From a grower perspective, I'd like to think that there's now some hope to at least slow down resistance and preserve the technologies we have remaining and whatever may one day come in the pipeline by using more appropriate management tactics than relying on a single herbicide. The downside is that usually comes at a cost, because we're usually talking about using multiple modes of action," he said.

"Meetings like this are powerful, because we realize it is not just a Midwest or a North American problem, but diversity is clearly a major part of the path forward," he added. 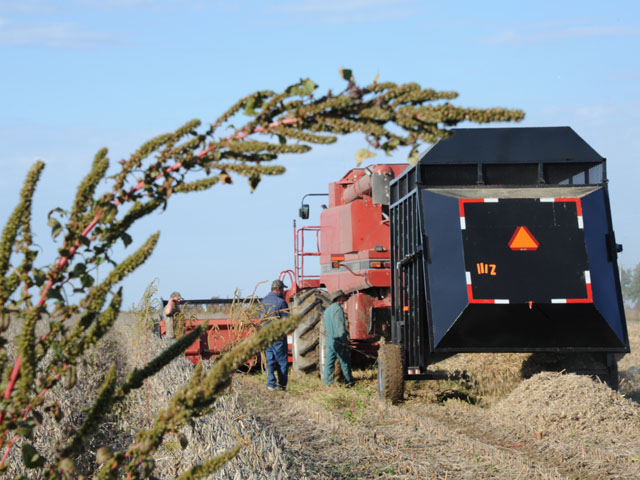