INDIANAPOLIS (DTN) -- Harvest 2016 isn't officially over, but already predictions of a fourth and fifth consecutive year of grim commodity prices in 2017 and 2018 are putting a damper on agricultural lenders' attitudes. Those attending the American Banker Association conference in Indianapolis, Indiana, this week described attitudes anywhere from relative calm in parts of the Corn Belt to severe distress in cotton and cattle country.

"Most ag lenders have a few big customers they are worried about, a few others straddling breakeven and a few doing fine," said Nate Kauffman, assistant vice president and Omaha branch executive for the Federal Reserve Bank of Kansas City. However, over 90% of lenders in the Kansas City district report deterioration in working capital levels among farm borrowers. Roughly 60% of lenders report increases in ag loans placed on "watch" lists, about double the level of a year ago. Lenders are also hiking collateral requirements and raising interest rates to reflect risks.

"You can see which way the trend is going this year," Kauffman added. "Agriculture is going through a period of transition. Profitability in crops is still poor, and adding to the stress is that there have been rare selling opportunities for the livestock sector."

Kirk Thomas, president of the Lone Star Bank in Lubbock, Texas, worries how years of consecutive losses and a lack of an effective government safety net will affect his cotton and cattle producers.

"West Texas is in survival mode," he said, noting that "people don't even pretend to be making money down here."

"We didn't participate in the ethanol boom," he said. "In fact, we were feeding a third of the nation's beef cattle in our feedlots, so they and the dairy sector were blindsided by high grain prices." What followed was a horrific 2011-14 drought that liquidated cattle herds and left feedlots with 35% overcapacity; a collapse in global cotton prices; and a federal farm program that effectively abandoned cotton growers because the U.S. needed to comply with an international trade ruling, he said.

Growers in the Lubbock area will harvest their best cotton crop since 2010 this year, and prices have crept up a little from their bottom. "Even so, we'll pay our production expenses but have nothing left over. You can't remain viable year after year without a return for your machinery and management," he said. "You've got to feel for people who risk so much to put out a crop every year and don't have money to pay themselves at the end."

Fortunately, Texas real estate values have remained stable, so collateralizing that asset is the only thing that has kept some people in business, he added.

The difference between now and the 1980s is that the amounts farmers have borrowed are "exponentially" higher, said Thomas, who has been lending to ag for 33 years. "Back then, cotton was a low input, intensively managed crop. Then came irrigation and spoon-fed chemicals, transgenic cottonseed and much larger production units.

"Today's John Deere cotton strippers cost $635,000 each. You need scale to afford that," he said.

Nate Franzen, president of agribusiness for First Dakota National Bank, in Yankton, South Dakota, counts bumper yields and good ARC payments among his customers' blessings this fall. But he noted only 40% of his customers made money on 2015 crops. While the bank is still gathering information on 2016 returns, he expects very similar results this year.

"Liquidity is our big focus. We did a fair amount of loan restructuring last year, but I worry that we didn't put enough working capital back into those operations," Franzen said. "We try to measure burn rates and leave enough for at least three or four years of working capital before they'd need another restructure."

Franzen is expecting at least another two years of subpar prices in grains and cattle, although pork could rebound quicker. Any disruption in ag exports -- should President-elect Donald Trump fulfill campaign promises to rescind trade pacts -- could worsen the outlook, he added, but is impossible to predict.

"It's hard to get bullish on ag right now," he said.

This is a year when lenders and borrowers must also wrestle with how deep they go tapping into a farm's core equity. Lenders can refinance land, but that will reduce an operator's ability to restructure down the road.

"We'll have conversations with borrowers asking if that's what they need, or maybe selling a piece of land to bring in cash might be more beneficial," Franzen said. "Land values are stable at the moment, but time is not their friend."

Joe Kessie, senior vice president of Lake City Bank in Warsaw, Indiana, chairs the ABA's ag and rural bankers committee. His northern Indiana territory experienced widespread negative profits last year, and some will repeat some losses in 2016. But he stressed the importance of not lumping all farmers in the same category.

"There are still some very, very strong situations who have all their land paid and don't borrow money," Kessie said. "In any down cycle, remember not everyone is in the same boat."

In his view, agriculture is experiencing an earnings problem, but it hasn't degenerated into a collateral problem. Good Indiana farmland is still selling for about $6,900 an acre, nearly identical to its December 2013 levels, according to actual sales data from the Peak Soil Indexes.

"If a borrower is under stress, farmland still gives a lot of options to work with people," Hesse said.

Robert Boesdorfer, ag division market president for First Midwest Bank in Danville, Illinois, believes phenomenal corn and soybean yields in 2016 will prevent most of his customers from a setback in their financial positions. "If a grower's five-year corn yield average was 180 bushels per acre, they might have harvested closer to 200 bpa this year. Soybeans were even better," he said. But he is not as optimistic about 2017 because growers can't count on a yield windfall every year.

"Better managers will make 2017 work. We're already seeing that in marketing returns and negotiating skills on cash rent," Boesdorfer said. "A lot of bigger clients have given up acres that weren't profitable for them."

Christopher Watkins, a senior vice president for Midwest Heritage Bank in Chariton, Iowa, said his territory in the south-central part of the state hadn't experienced many signs of financial distress yet. Growers still need to concentrate on paring their cost of production to align with 2017 prices. Average cash rents need to fall more than the 5% to 10% cuts achieved last year. But most Iowans who owned farmland still possess a nice accumulation of equity and capital in their balance sheets, so they avoid facing difficulties in qualifying for financing in 2017, he added.

That's despite a recent auction of poorer-quality land in his area that brought $3,000 to $3,800 an acre, down from $4,500 an acre a year ago. "In general, what it does tell us is to be cautious and continue to be prudent," Watkins said. 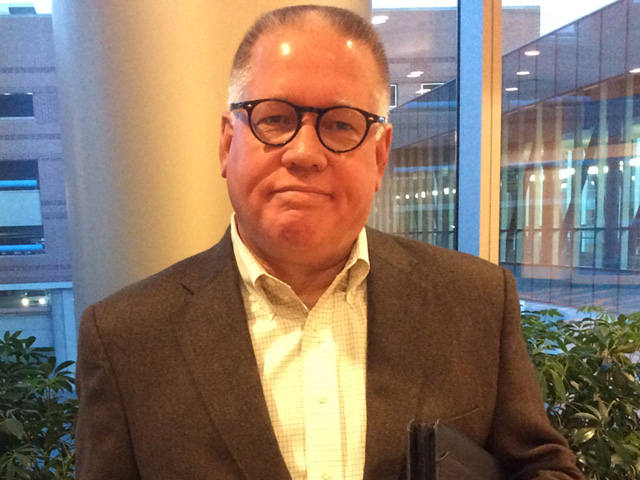