A bill introduced earlier this month in the Iowa Legislature -- the country's top red meat-producing state -- would ban people on the Supplemental Nutrition Assistance Program (SNAP) from buying meat and a lot of other typical grocery foods as well.

The bill, House File 3, has 39 co-sponsors in the Iowa House and is led by House Speaker Pat Grassley, a Republican. Pat Grassley is the grandson of Iowa U.S. Sen. Chuck Grassley, the longest-serving member of the Senate Agriculture Committee -- the committee that writes the farm bill, including SNAP rules, in Congress.

Under the bill, SNAP recipients would be restricted to buying foods that are approved under a separate USDA food-aid program, the Women, Infants and Children (WIC) program. WIC requires aid recipients to buy from a specific list of approved items that includes staples such as infant formula, cereal, milk, bread, juices, canned foods and baby foods.

WIC doesn't allow people to buy products such as packaged meat, or frozen or processed foods.

"I don't think the 39 co-sponsors of this bill know just how restrictive this is, and that it would ban meat," said Luke Elzinga, chairman of the Iowa Hunger Coalition, and the policy and advocacy manager for a network of food pantries run by the Des Moines Area Religious Council. "Under this bill, no ground beef, no chicken, no pork in the state of Iowa. I just can't believe that they knew that was what it was when the bill was introduced."

According to USDA's Livestock Slaughter report released Thursday, Iowa remained the No. 1 state for commercial red-meat production for December, largely because of its dominant position in pork processing. The Iowa Legislature bill would basically prohibit SNAP benefits in the state from being used to buy any pork products.

DTN could not find any similar bill in the country that would restrict SNAP recipients from buying meat products. There have been similar bills introduced in other states in the past, according to the Food Research Action Center (FRAC).

Leading up to the legislative session, Elzinga said he understood there would be an attempt to block SNAP recipients from buying candy or junk food under the bill.

The Food and Nutrition Act of 2008 -- the farm bill that year -- defines the food items eligible for SNAP purchases. Under the law, states do not have authority to separately restrict foods that can be purchased with SNAP benefits, according to USDA. The law does allow states to ask for a waiver, though USDA has not approved such waivers.

The Iowa bill has language that would provide another $1 million for the "Double Up Food Bucks" program, which gives people an extra $1 to spend for food for every $1 they spend on fruits and vegetables at certain grocery stores and farmers markets. That extra funding would only kick in, however, if USDA granted a waiver to restrict SNAP purchases.

HF3 has several provisions over SNAP eligibility and integrity requirements, including language that would prevent the state asking for exemptions from SNAP employment and trading requirements.

"So, we really saw double-digit increases in demand every month," Elzinga said. "With the hunger coalition, we work with pantries in other parts of the state and it's not just Des Moines, but food banks and food pantries across the state are breaking records. There was the loss of SNAP benefits, but just the cost of living has gone up so much and wages aren't people pace. A lot of people have seen their grocery budgets go up and up and they are turning to a food pantry, a lot of them for the first time ever." 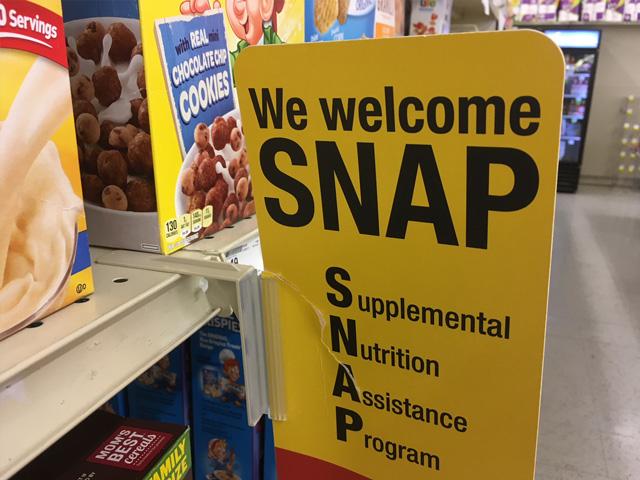