OMAHA (DTN) -- With drought choking commerce on the Mississippi River, a group of mayors along the river is proposing a list of policy recommendations, including paying farmers for voluntarily rotating acreage out of irrigation during droughts.

Jim Strickland, mayor of Memphis, Tennessee, and co-chair of the Mississippi River Cities and Towns Initiative, said Tuesday on a call with reporters that in 35 years he had never seen the river so low. "We have all these tools at our disposal for flood, but very few for droughts," Strickland said.

Barge traffic is moving on the river, but it continues to become more restricted. On Sunday, a barge was grounded near Greenville, Mississippi, backing up 80 vessels and roughly 1,000 other barges as a result. At that point in the river, barge traffic is constricted to one-way movement right now, said Lt. Phillip VanderWeit of the U.S. Coast Guard.

Barges are limited in weight and to moving in nine feet of draft and five barges wide. Southbound traffic Tuesday had 30 vessels with about 500 barges waiting in the queue near Greenville along with 50 boats and another 500 barges waiting to move northbound as well, VanderWeit said.

Paul Rohde, vice president of the Waterways Council, said barges in some cases have had to reduce their average load volumes by as much as 50%. Every foot of draft lost because of low water reduces a barge load by as much as 75,000 bushels of grain.

About 60% of all U.S. agricultural exports move down the Mississippi River. As DTN has reported, the low river levels have caused some river terminals to stop taking corn and soybeans. Farmers who can deliver to the river are seeing significant basis costs as well. Overall, the river moves entirely too much tonnage to be loaded on rail or trucks, Rohde said.

"Farmers and American agriculture are the ones who will be most impacted by this," Rohde said.

"It's really important that we continue to keep this river operational," he said. Talking about prolonged drought conditions, Rohde added, "Depending on the duration, this could be an unprecedented disruption of the inland river supply chain."

USDA is now licensing some emergency temporary storage in the region for farmers as well.

Stacy Kinder, mayor of Cape Girardeau, Missouri, said if the water levels get any lower at her city's port the conveyers will not be able to reach barges to load them.

The mayors also called for "more adaptive multi-watershed management so river systems can be managed at basin scale to mitigate for climate impact."

That recommendation comes as the Army Corps of Engineers prepares to reduce water flows from Gavins Point Dam in South Dakota starting Nov. 19. Gavins Point had been averaging about 30,000 cubic feet per second (cfs), but the Corps is starting to dial back releases from the South Dakota dam and will bring it down to the minimum level of 12,000 cfs.

Corps officials on the Missouri River told DTN last week they are not authorized to release water to support navigation on the Mississippi River. Rohde noted "Congress could fix it" by invoking the Commerce Clause of the Constitution to regulate interstate commerce.

"I don't know if they are talking about that at the Capitol, but that's certainly one option," Rohde said.

The mayors also pitched the idea of compensating farmers for voluntarily rotating acreage out of irrigation to alleviate drought. Another proposal would allow tapping USDA funds in the Inflation Reduction Act for drought resilience.

Right now, the La Nina pattern and forecasts for the upper Midwest are unclear on the chances of greater or lesser precipitation over the next few months that would raise the river levels on the lower Mississippi River. 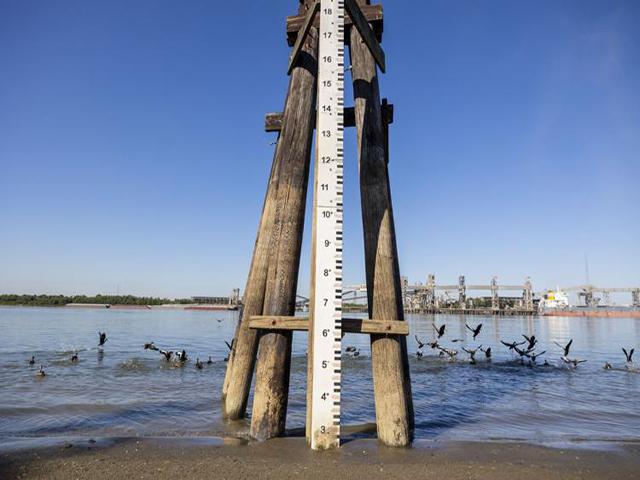