OMAHA (DTN) -- Federal officials didn't go as far as predicted Tuesday after declaring a water shortage in the southern part of the Colorado River Basin, but the Department of Interior will cut back water to Arizona by more than 21% in 2023.

Responding to drought and years of lower water flows on the Colorado River, the U.S. Bureau of Reclamation on Tuesday announced it would withhold 592,000 acre-feet, or about 21% of Arizona's annual water allocation, out of the river for 2023. Nevada would see an 8% cut in its allocation -- 25,000 acre-feet -- and Mexico would see a 7% reduction in river flows across the border, or about 104,000 acre-feet.

While California anticipated seeing an allocation cut as well, the state was spared from contributing to water savings in Tuesday's announcement.

Arizona had already taken an 18% cut for 2022. Much of those water cuts fell to Arizona farmers. Arizona officials, in a statement from the Arizona Department of Water Resources and the Central Arizona Project Aqueduct, stated, "It is unacceptable for Arizona to continue to carry a disproportionate burden of reductions for the benefit of others who have not contributed."

The cut in water flow comes as Lake Mead's (Hoover Dam) water level will remain below 1,050 feet above sea level in January, about 28% of capacity, a level that requires the Department of Interior to declare a "Tier 2 water shortage" for 2023.

The Colorado River feeds Lake Powell (Glen Canyon Dam) and then flows to Lake Mead. Both are major electric power generators for the region, and both are hitting critically low levels. Lake Powell is now projected to drop to 23% of its storage capacity by the end of the year.

While Arizona bears the brunt of the cuts, the reduction was not as severe as initially expected after the Bureau of Reclamation indicated in June that the seven states in the basin need to cut their water use anywhere from 2 million acre-feet to 4 million acre-feet. Still, Interior officials warned that the water draws from the river are not sustainable.

"In order to avoid a catastrophic collapse of the Colorado River System and a future of uncertainty and conflict, water use in the Basin must be reduced," stated Tanya Trujillo, assistant secretary for water and science at the Department of Interior.

The fight over water in the basin is critical for farmers, particularly in downstream states because roughly 70% of water supplies in the basin are used to irrigate about 5.5 million acres. The basin also supplies municipal water to roughly 40 million people.

Water cuts are increasingly necessary because water flows on the river have been declining for the past two decades due to prolonged drought. The lower flows are driven by the driest 22 years on record. That has cut the river flow on average by about 2.2 million acre-feet per year, essentially leading to over-appropriation across the basin.

As part of her deal on the Inflation Reduction Act, Arizona Sen. Kyrsten Sinema negotiated to include $4 billion for drought aid specifically to address the Colorado River Basin. The funds are tied to the dams and infrastructure but could go to pay irrigation districts to reduce water usage as well. Funding also could be used to convert irrigators to drip irrigation.

The federal water cuts come as groups representing major irrigation districts have been negotiating with state and federal officials on a plan to cut back annual irrigation by as much as 925,000 acre-feet in Arizona and California. The proposal offered the water reductions in exchange for $1,500 per acre-foot. That would put the tab at just under $1.4 billion per year.

"We have said we can do this. We can decrease our water use by one acre-foot, and we can maintain food production in the area," said Wade Noble, an Arizona attorney, who serves as coordinator for the Yuma County Agricultural Water Coalition, which represents four irrigation districts and about 185,000 acres of irrigated farm ground.

Noble said farmers in the Yuma County region produce much of the country's winter supply of fruits and vegetables, about $3.5 billion in value, along with crops such as alfalfa for the region's dairy and cattle producers.

"We're trying to provide the food that is uniquely produced in our area while responding to the imminent crisis on the river," Noble told DTN. "And it's going to be painful, we know that."

Noble said the water reduction proposal for farmers drew a lot of scorn over the price, but he said fruit and vegetable production can run $10,000 an acre in costs, and the irrigators are agreeing to give up roughly 15% of their irrigation.

"We're saying $1,500 an acre will not make us complete or whole, and it certainly won't make us rich, but we believe it will help us increase production using less water," Noble said.

Noble's Yuma County irrigation districts have been working with the Imperial Irrigation District (IID) in southern California, which oversees about 500,000 irrigated acres in the Imperial Valley and is projected to use about 2.65 million acre-feet this year. The IID board meeting also was going on Tuesday, including the entire morning in closed session.

Robert Schettler, a spokesman for IID, said in an email to DTN late Monday that district officials were not publicly discussing "what's on the table, as we don't want to impede negotiations.

"What I can tell you is that progress has been made and it's been productive, so we're hopeful, but we don't have a done deal yet," Schettler said.

A survey from the American Farm Bureau Federation highlights more than 60% of the American West, Southwest and Central Plains are in at least severe drought or higher.

Looking at orchards or other multiyear crops, 50% of California farmers, 40% of Arizona farmers and 33% of New Mexico farmers reported considering removing those crops because of drought.

AFBF spotlighted a comment from an Arizona farmer about both drought and encroaching home expansion.

"Many of the fields near us are now fallow. Cropland is being converted to housing developments at an alarming rate. Over 10,000 new homes are expected within a 10-mile radius of my house -- most within a 5-mile radius, all on cropland or former dairies. It is frustrating and alarming. Where will the food come from if we grow houses instead of food?"

AFBF stated that 57% of farmers in their survey reported increased restrictions on agricultural water use as reservoirs decline in the West. In the Colorado Basin, the percentages were even higher. 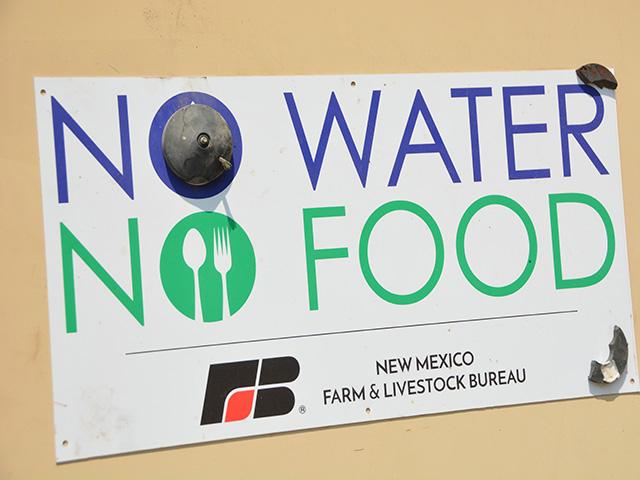