VAIL, Colo. (DTN) -- Agriculture Undersecretary for Farm Production and Conservation Robert Bonnie told the nation's sugar growers here that the Agriculture Department can help farmers with climate change issues but has only limited authority to address the current high cost of inputs.

USDA, Bonnie said in a luncheon speech Monday, exists to help farmers with both short- and long-term challenges.

The Biden administration has decided USDA can use the Commodity Credit Corporation line of credit to address climate change because the program it is developing is a commodity program, not a conservation program.

The CCC provides a "flexible pool of dollars" that is being used to keep land in production and to measure and monitor the outcomes on the climate, Bonnie said.

Speaking of the Partnerships for Climate-Smart Commodities, Bonnie said USDA is pleased with the applications it has received and that he believes that Agriculture Secretary Tom Vilsack will be ready to announce projects in late August or September.

Bonnie noted that he used to work on saving endangered species and said there is much more "alignment" among farmers and other advocates on climate change. Speaking of technology, he also said he believes in intensive productivity on land that is already in production.

Bonnie also said that the markets will play a major role in providing incentives for farmers to engage in practices to address the climate but that there is also a role for government through data and conservation programs that provide incentives.

Agricultural climate policy must be farmer-led from the bottom up because agriculture is so diverse, Bonnie said.

Bonnie also praised a symposium panel that discussed sustainability. On that panel, Alissa Marturano of Mars Wrigley said that her company wants to buy sustainably produced commodities. Mars Wrigley looks to "tier one" suppliers -- those who sell ingredients for final production -- to organize growers to produce sustainably.

"Ecolabeling is the future," Marturano said.

But Rebecca Larson of the Western Sugar Cooperative in Denver said she has told farmers to engage in sustainability practices because there will be a market. Larson added, though, that sometimes she feels like "a liar" because, so far, only 1% of sales are based on sustainability.

Bonnie acknowledged that farmers and lawmakers are asking whether USDA can address the high cost of inputs such as fertilizer, but he said USDA programs don't deal with input costs. But he added that he believes input costs will be an issue when Congress debates a new farm bill.

The best action USDA can take, Bonnie said, is to manage the crop insurance and Title I programs and others such as farm loans well. Bonnie noted that USDA has processed about $6 billion in pandemic-related payments.

At the end of the session, former House Agriculture Committee Chairman Collin Peterson, D-Minn., told Bonnie that history shows every time there is a period of high prices a bad period for agriculture follows. He cited the high prices of the 1970s followed by the farm crisis of the 1980s.

Bonnie told Peterson he hopes he is wrong, but that the country needs to be prepared for such a possibility.

"I can't see into the future, but I take the caution and concern seriously," Bonnie said. 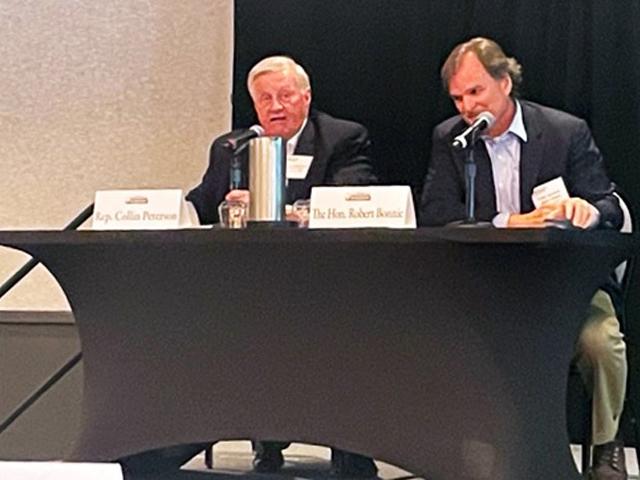