LINCOLN, Neb. (DTN) -- Nebraska Republican Gov. Pete Ricketts on Friday told landowners and politicians from around the country to get educated about the purpose behind the Biden administration's initiative to conserve 30% of U.S. land and water by 2030.

Speaking to attendees at the first national "Stop 30x30" summit in Lincoln, Nebraska, Ricketts outlined why he believes the federal government is trying to take land from private landowners -- through regulation and conservation easements.

Ricketts is one of 15 governors who wrote a joint letter to President Joe Biden on April 21, 2021, expressing opposition to a Biden executive order signed on Jan. 27, 2021.

The governors, including Ricketts, said they were unaware of "any constitutional or statutory authority" granted to the president or any federal agency to set aside 30% of all land and waters, https://americanstewards.us/….

The letter includes a list of 12 questions about how the federal government planned to reach the goals and how a program to do so would be implemented.

"We are now 15 months later, and the president still has not responded," Ricketts said. "I'm not surprised because they don't have the answers. Or rather, they don't want to tell you what those answers are because it's being driven by the radical environmentalists."

Local and county government leaders across Nebraska have taken the national lead in opposing 30x30, recently renamed by the Biden administration as "America the Beautiful."

Ricketts and local government officials are concerned the federal government will expand its control of private and public lands through permanent easements.

LB 1135, introduced during the recent Nebraska Legislature session that ended this week, would have limited the terms of conservation easements to no more than 99 years. The bill also would give local elected officials more authority to approve or deny future easements. That bill did not make it out of committee.

County officials in Nebraska, however, have a unique power to reject permanent conservation easements if they do not fit counties' comprehensive land use plans.

Because 97% of all property in Nebraska is privately owned, Ricketts said, he has been urging landowners across the state to be cautious about what they're doing before signing conservation easements.

"Under the Nebraska state law, if you sign a conservation easement, unless you define the term of years, it is by definition permanent," Ricketts said.

"So, you have basically given up your private property rights. You sign a conservation easement. You give up your rights, and if it's permanent, you've done that forever."

Ricketts said farmers and ranchers in Nebraska have been active for generations in conserving the land and water, without having to be told to do so.

"We protect the land because we know we need it for future generations to feed our state our nation and our world," he said. "And so, we do the right thing here. We don't need the federal government lecturing us about the environment."

Currently, about 289 million acres, or about 12%, of all land in the U.S. is devoted to conservation to varying degrees.

"To get to 30%, you would have to add on 440 million acres more," Ricketts said. "To put that in perspective, that is nine states of Nebraska or two states of Texas."

Ricketts said he believes the Biden administration is preparing to expand conservation through regulation.

The state of Nebraska relies heavily on property taxes to fund local and state governments. Ricketts said pulling more land out of agriculture production would have a ripple effect of shifting the tax burden away from land to other taxable property.

"If you take land and put it into a conservation easement, you know what happens," he said. "The value (of the land) drops, and so people are not paying as much taxes."

Ruth Sorensen, property tax administrator at the Nebraska Department of Revenue, said that since Ricketts signed the executive order, two conservation easements have been denied by county governments in the state.

Based on data from the Nebraska Department of Revenue, Sorensen said, land values in Nebraska had taken a $329 million hit in lost value coming from easements in 2021.

"We are not encouraging permanent easements," she said. "We encourage landowners to review their easement contracts."

Sorensen provided two examples of how conservation easements have affected land values in the state.

This example, Sorensen said, came at a time when ag land values were on the rise statewide.

SUPPORT FOR 30X30 AMONG NEBRASKA CITIZENS

While some state leaders and groups oppose Biden's 30x30 plan, there is support for the plan among Nebraska citizens, according to the Nebraska Farmers Union, which pointed to the results of a recent poll that found widespread support of the goals of 30x30.

The NFU on Thursday released the results of the poll of 501 Nebraskans conducted by New Bridge Strategy between April 8-13.

Seventy-seven percent of poll respondents said they would support the goal of conserving 30% of land and water by 2030.

John Hansen, president of the Nebraska Farmers Union, said during a media Zoom call on Thursday that he doesn't understand why Ricketts is involved in the "Stop 30x30" movement.

"In my lifetime of working with conservation programs up until Gov. Ricketts, I've never known anyone who's tried to make participating in conservation cost-share programs a partisan issue," Hansen said.

"There are folks of all different kinds of views coming together in order to protect our soil and water for the future. And so, it's disappointing that of all the things that Gov. Ricketts could spend his time trying to fix he's choosing to fix something -- which is apparent to all of us who are participating in this area -- not broken."

Hansen said he believes the Biden administration needs to do a better job of explaining the conservation goals.

"The Biden administration has sort of left themselves open to a lot of the speculation about just exactly what it is that 30 by 30 is or does," Hansen said, adding the administration hasn't been as "forthcoming as we wished they would be." 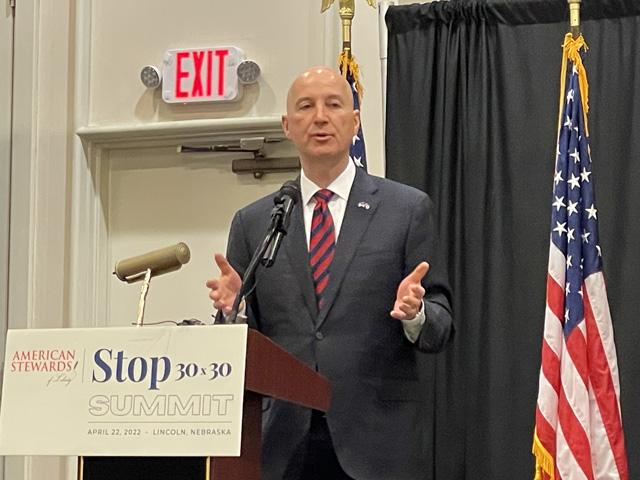