OMAHA (DTN) -- As the invasion of Ukraine caused global grain companies to suspend their operations there and put some global grain exports at risk, U.S. Agriculture Secretary Tom Vilsack said Thursday one of his biggest immediate concerns is the possible impacts on fertilizer or other input supplies for farmers.

Vilsack was asked Thursday by reporters on a livestream press conference from the USDA Ag Outlook Forum whether the invasion posed new risks for farmers in terms of fertilizer and energy costs. The secretary raised some concerns that suppliers could try to take advantage of the situation to further increase prices.

"That's my biggest concern here in terms of the current situation," Vilsack said. "It will take some time, obviously, for the impact of all of this to be understood and felt. I sincerely hope that no company out there -- whether it's fertilizer or any other supply that may be impacted by this -- will take unfair advantage of the circumstances and situation." He added USDA would be "making sure they don't use this situation as an excuse for doing something which isn't necessarily justified by supply and demand, and that's my biggest concern. We will keep an eye on that."

Vilsack also said it was too early to talk about food impacts -- though he acknowledged he would have a different view if he were an agriculture secretary in Europe rather than the U.S.

"It's too early to talk about Ukraine, as it relates to Europe," Vilsack said. "From a U.S. perspective, I don't foresee a circumstance where American consumers on the food side are necessarily going to be impacted and see the kind of impact we will see on European consumers."

Crop commodities had quick responses to the invasion. Early Thursday, corn, soybeans and both winter wheats were all limit-up, but by the end of the day, there was some moderation. March corn closed up 11 1/4 cents, and March Chicago wheat ended up its 50-cent limit, but March soybeans fell 13 1/2 cents.

A lot of eyes in the grain trade were watching for news about fighting around the key southern Ukraine port of Odessa. Cargill, CHS and ADM are among the companies with operations at the port.

Bunge and ADM each reported they had temporarily shut down operations in Ukraine. Bunge, according to a news report, has more than 1,000 employees and shut down processing facilities in the country as well as a grain terminal.

ADM also suspended operations in Ukraine where it employs 630 people. ADM has a grain terminal at the Odessa port, as well has six inland grain elevators and a trading office in Kyiv.

"Our first concern is the health and welfare of our employees and their families, and their safety is our top priority," an ADM spokesperson stated to DTN. "Currently, our facilities in Ukraine are not operating, following security protocols and government guidelines. ADM will use the full breadth of our global and integrated supply chain to support the needs of our customers around the world as we manage through this difficult situation."

Bloomberg reported that a ship chartered by Cargill in Ukrainian waters in the Black Sea was "hit," but the vessel and crew are safe and accounted for.

DTN Lead Analyst Todd Hultman noted Ukraine is the world's fourth-leading exporter of both corn and wheat. Ukraine is also the world's largest exporter of sunflower-seed oil, an important component of the world's vegetable oil supply. This late in the season and given the two-month warning of possible conflict, much of Ukraine's grain for export has likely shipped, so supplies at risk should be minimal by now.

Hultman added, "We are not far away, however, from spring and the emergence of a new winter wheat crop, which may be difficult to harvest in eastern Ukraine this year, depending on how events unfold."

Turning to Russia, Hultman added that Russia is a major producer of nitrogen, phosphorous and potash. It is not clear if the West would hit Russia's fertilizer industry with sanctions, but it is possible. Ukraine's neighbor Belarus is the world's second-largest exporter of potash fertilizer and was hit with sanctions from Europe and the U.S. in 2021. Because of ethanol and biodiesel, crop prices are also influenced by swings in energy prices. Crude oil prices have surged to their highest levels in seven years as Russian troops threaten Ukraine. The main concern is Russia may hold back oil production as a lever against any punitive response from the West.

Leaders at USDA on Thursday sought to hold a rational, focused discussion on agricultural commodities, trade and farm conditions as commodity prices spiked, equity markets fell, and the world watched in shock as smoke bellowed from the outskirts of Ukrainian cities with both Russian helicopters and tanks moving into the country.

USDA Chief Economist Seth Meyer's speech at the USDA Ag Outlook Forum -- held entirely online -- reflected the inability overnight to properly factor in the immediate disruption and uncertainty created in the previous 12 hours. Meyer pointed that out as he began his presentation looking at grains, oilseeds, protein outlooks and price projections.

"This doesn't include any of those events last night, obviously," Meyer said. "I think it's quite too early to understand what the first-order effects are on the grain trade, what the secondary effects on energy and on the economy might be. So, we'll talk about those things in a very general sense to kind of provide some background."

Meyer later added in his presentation, "We have an unknown impact of conditions going on in eastern Europe right now."

Vilsack also was asked by reporters how the Russia-Ukraine conflict would affect trade between the U.S. and Europe. The secretary said the U.S. has always had a challenging agricultural trade relationship with Europe, which exports $17 billion more in agricultural and food products to the U.S. than the U.S. sends across the Atlantic. Vilsack said he had actually talked about that issue with EU officials last week in Dubai. Tying that to the invasion, though, Vilsack added, "This is a difficult situation, and, frankly, at this point in time, I don't think it's particularly helpful to project what might happen."

Condemning the attack, President Joe Biden announced new sanctions against Russia, targeting the country's financial system and claiming to reduce Russian access to technology as well. The White House stated the sanctions would affect nearly 80% of Russian banking assets while cutting off imports of technology as well. Biden noted the commitments of other "G7" members Australia, Canada, the European Union, Japan, and the United Kingdom. Still, as the U.S. and its partners announced sanctions, China announced support for Russia and also agreed to lift import restrictions on Russian wheat. 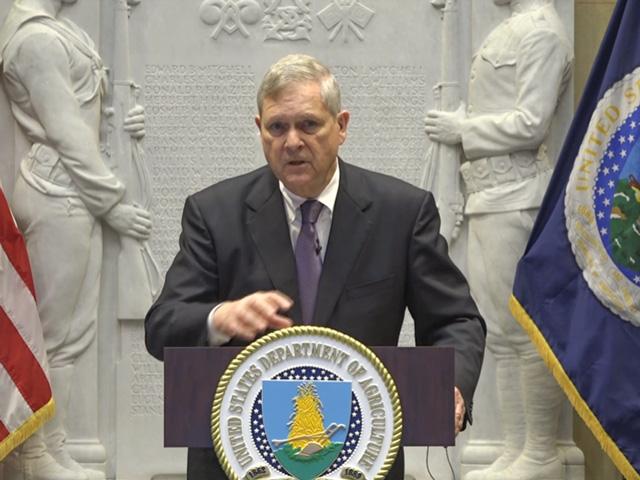