But then an odd thing happened. By the end of Tuesday's trading session, March corn finished up 3 1/4 cents and March soybeans were down 8 1/2 cents, well above the 20-cent drop prices showed earlier Tuesday morning. The weekend rains plus a wetter forecast for Argentina barely made a dent. By Wednesday's close, March corn was up another 11 cents and March soybeans were up 30 cents.

In the case of corn, recent demand news has been disappointing. Thursday's report from the Energy Department (Jan. 20) showed U.S. ethanol inventory at 23.6 million barrels, the highest since February 2021. Chicago ethanol traded at $2.19 the same day, down over $1.50 a gallon from its peak at Thanksgiving.

USDA hasn't reported a corn export sale since Jan. 12, and so far in 2021-22, corn export sales commitments are down 9% from a year ago. If there is something bullish happening in corn prices, dry weather in South America is the first suspect.

For soybeans, the generous rain prospects for crops in Argentina are still early enough to help crops, and we did see a $15.50 drop in March soybean meal on Jan. 18. Soybeans' crush value took a brief hit, but came back even stronger Thursday, thanks to a 4.42-cent surge in March soybean oil during the three days following Martin Luther King Jr. Day. In the first three days of this four-day week, March soybean oil is tied with Minneapolis wheat for the largest percentage gain among grain-related contracts.

That brings us to the other strange event that happened the first two trading sessions after Monday's holiday. March contracts of the two winter wheats jumped 55 cents higher each, and March Minneapolis wheat gained 61 1/2 cents. The buying was prompted by rising concerns Russian troops may be preparing to move into Ukraine, similar to the way Russia seized Crimea in the winter of 2014.

It is difficult to say how the current conflict will go or if Russia will invade as President Joe Biden said he expects Russia will. One glaring difference is that this time around, energy prices are more involved, as any retaliation by the West against Russia could prompt a response by Russia to lessen Europe's fuel supply. Not only is Europe low on energy supplies this winter, but it is also a sore spot in the United States where rising energy prices have been responsible for much of the record inflation making headlines.

March crude oil had fallen to a low of $62.05 on Dec. 2 after traders worried about the impact of the new COVID omicron variant on world oil demand. By Jan. 20, the same contract was at $85.55 a barrel, near its highest spot prices in seven years. Traders aren't even paying attention to the coronavirus news anymore.

It may sound odd, but this week's 4.42-cent surge in March soybean oil is largely related to the potential conflict in Ukraine and sharp runup in crude oil prices. In 2014, biodiesel accounted for 26% of U.S. soybean oil demand, but now represents 41% of soybean oil use. That number is expected to climb significantly the next several years as more renewable diesel plants are scheduled to be built.

As bullish as the possible conflict in Ukraine has been for U.S. corn and soybean and wheat prices, we have to also recognize that the outcome is highly uncertain and has put markets in a potentially volatile spot. I suspect Russia may drag this out for a while and enjoying needling the West with higher energy prices. But that is just a guess and not an insight worthy of a large bet.

For producers holding old-crop supplies of corn or soybeans or wheat, current prices are attractive and have been given an unexpected boost this week from an impending conflict that may or may not happen. Producers may want to gamble on higher prices from here, but I would advise keeping the risk exposure low. There is no edge in trying to outguess the current and very tense scenario. 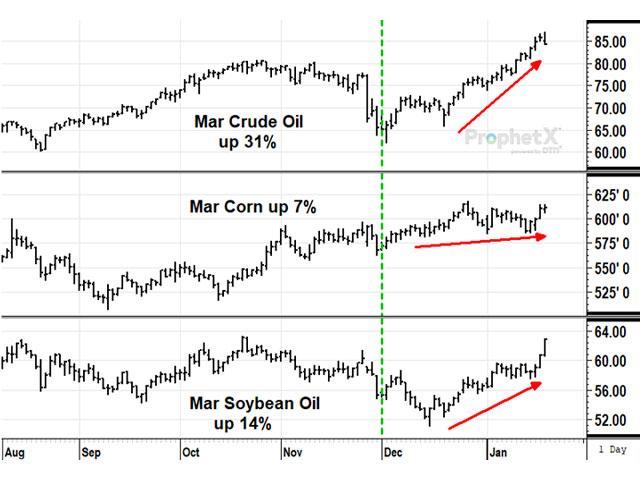