It's hard to believe it's been more than a month already since we gathered in Chicago at DTN's Ag Summit. Since then, time and the holidays have gone by in a blur. In the markets, however, there have been several changes since I offered price outlooks on Dec. 7 for corn, soybeans and Kansas City wheat, making this a good time for an update.

Before we get to the three crops, I gave an overview in December that showed how the economy and U.S. energy production were still suffering from the disruption caused by the initial pandemic in 2020. At the time of the talk, the U.S. economy was missing 3.5 million jobs from the pre-pandemic peak of 158.7 million. U.S. employment data for December now shows the number of missing jobs down to 2.7 million. In spite of a record surge of new coronavirus cases in the U.S. in January, it's impressive that job growth continues to show progress, a vital part of untangling logistical logjams.

U.S. oil and gas producers took severe financial hits in 2020, and at the time of the talk, U.S. oil production was down 1.4 million barrels per day (bpd) from the pre-pandemic peak of 13.0 million bpd. The most recent update of oil production was down 1.3 million bpd from the peak, as of Jan. 7, slow progress that is contributing to a spot crude oil price near its highest level in seven years. Rising energy prices continue to be a key component of the rising inflation numbers that are getting plenty of headline attention.

As expected from the Dec. 7 presentation, corn prices have held support so far, but there have been a few changes to note. Ethanol margins that were highly favorable have in December succumbed to seasonal pressures as ethanol inventory climbed to its highest level since February 2020. On Jan. 12, USDA increased its estimate of corn demand for ethanol by 75 million bushels (mb) to 5.325 billion bushels (bb), but it also reduced corn's export estimate by 75 mb to 2.425 bb.

USDA's lower export estimate was a bearish surprise and happened at the same time USDA's corn crop estimates for Brazil and Argentina were lowered by a combined 3.5 million metric tons (mmt) or 138 mb. Ukraine's crop estimate, however, was increased by 2 mmt, or 79 mb, and it looks like USDA expects the U.S. to lose some export business to Ukraine.

USDA acknowledged Brazil's first corn crop suffered limited damage from dry conditions, but the larger, second crop has yet to be planted, so there is still plenty of uncertainty for corn prices ahead. My expected price range for DTN's national index of cash corn prices remains at $4.80 to $6.50 in 2022 with the best chances for the highest prices in the first five months of the year. Current prices near $6 are extremely attractive for producer selling, a proverbial bird in the hand.

Soybean prices have been the bullish surprise of the three crops since early December, climbing more than a dollar higher on the strength of cash demand for soybean meal in the U.S. and assisted by dry weather in South America. On Jan. 12, USDA reduced its crop estimates for Brazil, Argentina and Paraguay by a combined 9.5 mmt or 349 mb. Export estimates of the three were only reduced by 59 mb, however, not leaving much benefit for U.S. producers.

While South America's weather problems have brought back some speculative excitement to the soybean market, the more solid source of demand has come from historically strong crush margins in the U.S. USDA's latest report from Jan. 13 showed 1 bushel of $13.91 soybeans in Illinois could produce $10.02 worth of meal and $8.03 worth of bean oil, a strong incentive to keep crush plants buying soybeans.

This year's dry weather in Argentina is also contributing to higher crush values in the U.S. and is a new source of bullishness not anticipated at the time of Ag Summit. I now have to say the expected range of $10 to $12 a bushel for cash soybean prices in 2022 has widened to $10 to $14 per bushel. The current lack of soybean export sales remains a bearish concern in 2021-22 with total sales and shipments of soybeans down 23% from a year ago.

The expected price range for DTN's national index of cash hard red winter (HRW) wheat prices was $6.50 on the low end and was unlabeled on the high end because of the chronic threat of drought in the southwestern Plains. Overall, I expected U.S. wheat prices to remain well supported early in 2022, before trader attention started turning to the emergence of the new winter crops.

Instead, all three U.S. wheat prices started trading lower after Christmas and broke technical support in the first week of 2022, prompting DTN's Six Factors Market Strategies to recommend selling the final 25% of 2021 production for all three U.S. wheats.

The sudden sell-off this early in the new year was likely related to record harvests in Australia and Argentina and, possibly, early satisfaction from end-users that may have obtained the supplies they needed, at least for the time being. Whatever the cause, it was a good reminder of why both fundamental and technical market factors are included in DTN's Six Factors Strategies.

Economists have traditionally protected their predictions with the Latin phrase "ceteris paribus," meaning all else staying the same. Of course, rarely does anything related to markets stay the same, not even for five weeks. I tend to think of market outlooks like the one given at Ag Summit as "good until the next surprise," as it almost always is a matter of when, not if. Stay tuned as there is plenty of time for more surprises in 2022. 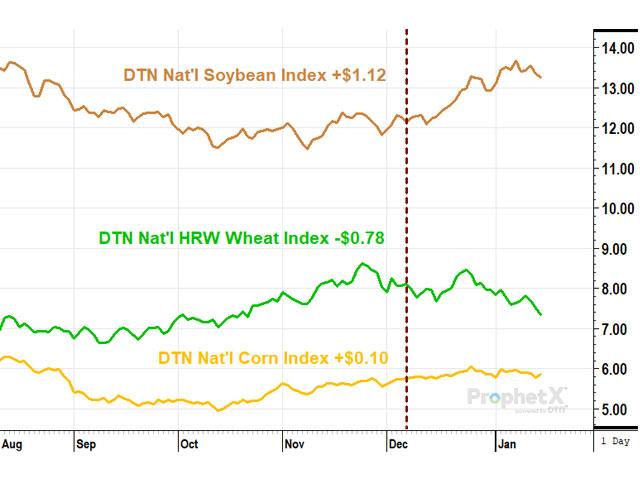