OMAHA (DTN) -- Following the loss of life, homes and businesses, the agricultural community is assessing damages from Friday night's storms that wrecked the landscape for more than 200 miles across five states.

One of the hardest hit communities was Mayfield, Kentucky, where Mayfield Grain Co., is an independent grain elevator with 750,000 bushels of capacity. The grain elevator's buildings were destroyed and several of its bins damaged.

"First of all, I would like to thank God for showing mercy on my family and our work family," posted Jake Whitford, one of the family owners of Mayfield Grain, on a Facebook posting. "We all came out unscathed. The damage is unreal, pictures don't do it justice. To say we are overwhelmed is correct, but we are also overwhelmed by the outpouring of calls, text, and emails from customers friends, vendors all wanting to lend a hand. I apologize if I have not been able to reply to everyone or answer all the calls. We honestly don't know where to begin. We need a few days to get a plan together and we will try to update plans of a temporary office."

Nearly 30,000 homes and businesses in Kentucky remained without power on Monday morning.

DTN Ag Meteorologist John Baranick noted how the tornado could be a record-breaker.

"The storm that went through Mayfield, Kentucky, was from a long-tracked supercell that appears to have put down a continuous damage path of about 250 miles from northeast Arkansas to central Kentucky," he said.

"It will take days or perhaps weeks for all of the National Weather Service offices that were affected to survey the damage. But if they conclude that it was one tornado, it would be the longest-tracked tornado recorded, beating out the infamous Tri-State Tornado from March 18, 1925, which had a track of 219 miles and killed 695 people. It has already garnered the moniker the Quad-State Tornado by several outlets and individuals as it went through Arkansas, Missouri, Tennessee, and Kentucky."

The Storm Prediction Center has reports of 55 tornadoes that occurred on Friday night, but inevitably many of these are from the same tornado, Baranick added.

"Other tornado reports came in from in Missouri, Illinois, Mississippi, Alabama, and Ohio, though I could see the Ohio and Alabama reports eventually being cut out. Another long-tracked storm moved from just north of St. Louis through central Illinois."

Quarles said the state was working with Kentucky Farm Bureau and Extension to gather donations and avoid duplications.

Federal Emergency Management Agency has set up an incident base in Fort Campbell, Kentucky, to provide food and basic supplies such as blankets and medical equipment for people. FEMA also opened up at least 11 shelters in Kentucky and three in Tennessee as of Sunday, Associated Press reported.

The American Red Cross also began responding over the weekend as well.

For humanitarian relief in Kentucky, consider donating to www.FeedingKY.org

Donations can also go to www.redcross.org

Editor's Note: Was your farm or agricultural business affected by the tornadoes or high winds from Friday night? You can share your experiences with talk@dtn.com or our DTN/The Progressive Farmer Facebook page. 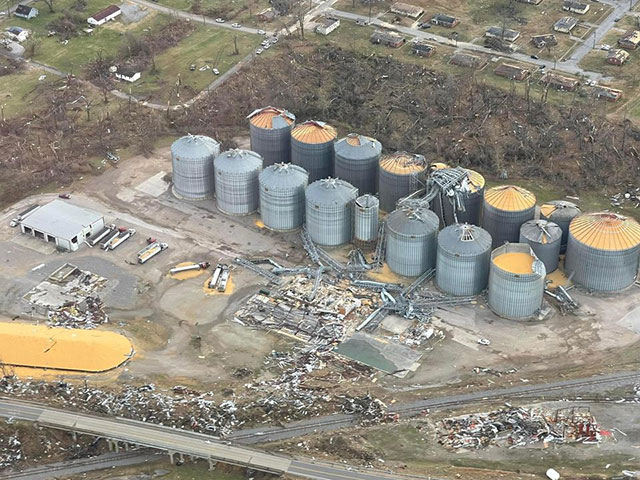