OMAHA (DTN) -- One of 13 Republicans who voted a week ago to support the final passage of the $1.2 trillion infrastructure bill, Rep. Don Bacon of Nebraska, a member of the House Agriculture Committee, said his party's leadership got tied up in a knot over hyper-partisanship rather than what's best for the country as a whole.

"I thought it was a vote that was right for America and right for our district," Bacon told DTN.

The 13 Republicans who backed the bill provided more than enough votes for final passage of the Infrastructure Investment and Jobs Act late on the night of Nov. 5. The country's political divisions led at least some conservatives to attack Bacon and others and even call for their removal from committee assignments. Bacon was the only GOP member of the House Agriculture Committee to vote for the bill despite widespread backing from agricultural groups.

The infrastructure bill will authorize $1.2 trillion in spending over 10 years, with about $550 billion of that considered as new funding for projects. Bacon pointed to the need to improve highways, bridges, airports, seaports, locks and dams.

"The locks and dams are very important to agriculture. They're 90 years old in some cases, and they have one-third of the capacity of what they are building in Brazil," Bacon said. "We have to remain competitive."

"It was a bipartisan vote. Lindsay Graham, Chuck Grassley, Deb Fischer all voted for it, as did Mitch McConnell, and we should have taken it in the House and made it a bipartisan effort as well," Bacon said.

Bacon, 58, is a retired Air Force brigadier general and linked infrastructure to the country's strategic needs. Bacon added he felt his party leadership in the House miscalculated by not aggressively pushing for an immediate vote on the infrastructure package while Democrats squabbled over their progressive "Build Back Better Act," the reconciliation bill that is still being debated among Democrats.

"Frankly, the Republican leadership, I believe, failed here," Bacon said. "They should have said, 'Speaker Pelosi, we want this bill put on the floor right now and not held hostage by the progressives to pass the Bernie Sanders reconciliation bill.' I think that would have been the right strategy to take ownership and put pressure on the Democratic leadership to get the bill on the floor. But for some reason, they went 180 and went for a hyper-partisan vote. That was a mistake. This bill was always going to pass, and we had 30 of us Republicans who had worked on the bill."

Last week after the House vote, Rep. Marjorie Taylor Greene, R-Ga., went on a social media tear against her 13 fellow Republicans who voted for the bill, including posting their office phone numbers on Twitter.

"These are the 13 'Republicans' who handed over their voting cards to Nancy Pelosi to pass Joe Biden's Communist takeover of America via so-called infrastructure," Greene tweeted early Saturday morning.

At least some of the 13 GOP members have reported hostile backlash to their votes. At least one caller said he or she hoped Bacon would slip and fall down a staircase, the New York Times reported. Bacon told DTN his office is just forwarding a lot of those more visceral calls back to Greene's office.

"We just forward a lot of those calls back to the congressperson," Bacon said.

Former President Donald Trump also has weighed in, calling the 13 GOP members RINOs (Republicans in Name Only), and stating inaccurately that only a small percentage of the bill will go to "real infrastructure," though Trump spent four years trying to get an infrastructure bill passed as well. Trump, like others, views the bill's passage not as addressing a need in the country, but giving President Joe Biden a political victory.

"All Republicans who voted for Democrat longevity should be ashamed of themselves, in particular Mitch McConnell, for granting a two-month stay, which allowed the Democrats time to work things out at our Country's, and the Republican Party's, expense!" Trump said in a statement.

The bill was supported by groups such as the U.S. Chamber of Commerce and American Farm Bureau Federation, groups generally more aligned with Republicans. The bill also garnered backing from groups representing blue-collar workers such as construction unions and long-haul truckers.

While Nebraska is a largely red state, that's not the case in Bacon's 2nd District, which is largely the Omaha metropolitan area. Bacon won his third term last year in the district, but voters in the district also backed Biden. In Omaha, the group the Business Roundtable has run ads in the local newspaper thanking Bacon for backing the bill. Rob Hanson, CEO of a Nebraska-based construction materials company Monolith, also wrote a letter to the editor commending Bacon for supporting the bill because of incentives tied to technologies that reduce emissions.

"This bill incentivizes infrastructure innovations like clean hydrogen, which play an important role in fueling the resurgence of American manufacturing and ensuring that the United States remains competitive in the energy sector while achieving our decarbonization goal," Hanson wrote.

Overall, Bacon said he's not a big fan of government spending. He voted against the $1.9 trillion American Rescue Plan last spring, which he tied to some of the inflation challenges facing the country right now. But the former general also said the federal government has responsibilities in defense and infrastructure, such as dealing with the logjams at the nation's ports.

"Our seaports are strategic for us, and this is an area we should be investing in," he said. Bacon added, "We can produce grain and produce beef and pork products at a price nobody else can, but if you can't ship it and export it, if you don't have a logistics system that's competitive, you lose that competitive edge. We have to maintain that competitive edge for our agriculture."

Within his own state, Bacon noted Nebraska is among the lowest states in the country for rural broadband access. The bill has $65 billion for broadband expansion nationally.

The political calculations on the infrastructure bill also reflect Republicans not understanding their own party's history, Bacon said. President Abraham Lincoln created the transcontinental railroad and worked on waterways to move grain, even during the Civil War. President Dwight Eisenhower pushed Congress to create the first federal highway bill in 1956, a bill so popular the final version passed the House on a voice vote -- meaning there was no opposition. While his office has gotten some phone calls and criticism on social media, Bacon said polling shows more than two-thirds of Americans backed an infrastructure bill.

"We should have taken ownership of this, and a strong, modernized infrastructure is great for the economy. That's the bottom line," Bacon said. 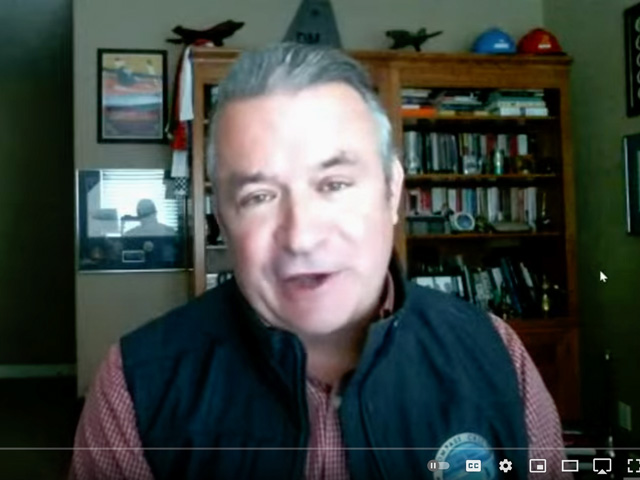