OMAHA (DTN) -- Farmers could face challenges getting in their orders for John Deere equipment as the tractor giant's union workers agreed at midnight Wednesday to go on strike.

United Auto Workers International issued a statement that John Deere members went on strike at midnight after talks with Deere & Co., at Moline, Illinois, had failed to reach an agreement.

"Our members at John Deere strike for the ability to earn a decent living, retire with dignity and establish fair work rules," said Chuck Browning, vice president and director of the UAW's agricultural implement department. "We stay committed to bargaining until our members' goals are achieved."

The union's call for a strike affects more than 10,000 workers at 14 Deere facilities nationally. UAW said union members had set up pickets.

"Pickets have been set up and our members are organized and ready to hold out and fight for a contract they believe meets their needs," said Ron McInroy, director of UAW Region 4. "Our members and their families appreciate the community support they have already gotten. Strikes are not easy, but some things are worth fighting for."

"These are skilled, tedious jobs that UAW members take pride in every day," said Mitchell Smith, UAW Region 8 director. "Strikes are never easy on workers or their families but John Deere workers believe they deserve a better share of the pie, a safer workplace and adequate benefits."

In Waterloo, Iowa, the UAW Local 838 represents about 3,000 workers. On its Facebook page, Local 838 called on members to report for "Strike Duty" early Thursday morning.

Deere & Company does not currently have an estimate of when employees affected by the strike will resume activities or the timing for completion of negotiations with the UAW. As recently as Oct. 1, Deere had announced the company had reached a tentative agreement on a six-year contract with UAW workers after six weeks of talks. Deere had said earlier this week that the package offered to employees would have provided a 5% to 6% wage increase with higher payments also to Deere retirees. The contract, though, would have ended pension plans for new workers hired at facilities, the Des Moines Register reported.

Deere released a statement early Thursday that the company is committed to reaching a deal with workers.

"John Deere is committed to a favorable outcome for our employees, our communities, and everyone involved," said Brad Morris, vice president of labor relations for Deere & Company. "We are determined to reach an agreement with the UAW that would put every employee in a better economic position and continue to make them the highest paid employees in the agriculture and construction industries. We will keep working day and night to understand our employees' priorities and resolve this strike, while also keeping our operations running for the benefit of all those we serve."

On Deere's website, the company stated, "We'll Keep Running," and activated a contingency plan for workers to continue meeting needs for customers. "Deere is committed to a favorable outcome for everyone involved."

Deere added, "In response to news of the UAW's strike, we have activated our Customer Service Continuation (CSC) Plan. As part of John Deere's CSC plan, employees and others will be entering our factories daily to keep our operations running. Our immediate concern is meeting the needs of our customers, who work in time-sensitive and critical industries such as agriculture and construction. By supporting our customers, the CSC Plan also protects the livelihoods of others who rely on us, including employees, dealers, suppliers and communities."

Deere's first strike since 1986 comes after 90% of UAW members on Sunday voted to reject the new contract offered by Deere. The 1986 strike, which lasted 163 days, came after Deere laid off thousands of employees during the 1980s farm crisis, the Des Moines Register reported. The current strike comes as Deere comes off a third-quarter report showing $1.667 billion in net income and projected full-year earnings ranging between $5.7 billion to $5.9 billion, "reflecting robust market conditions," Deere reported in its third-quarter report in August.

"Our strong results, driven by essentially all product categories, are a testament to the exceptional efforts of our employees and dealers to keep our factories running and customers served while enduring significant supply-chain pressures," said John C. May, chairman and chief executive officer, in August announcing Deere's quarterly income. "We also made strategic investments in the quarter aligned with our smart industrial strategy. They will further our efforts to help our customers achieve improved profitability, productivity, and sustainability through the effective use of technology." 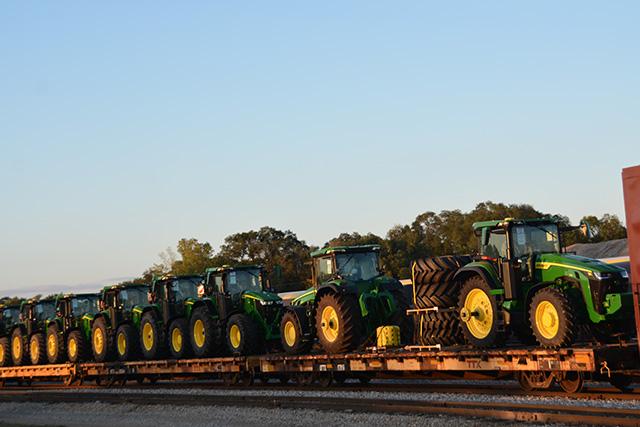