OMAHA (DTN) -- Agriculture Secretary Tom Vilsack is in Florence, Italy, on a recruiting mission to create a "coalition for productivity growth" -- a group of agricultural export countries to stress the role of science at the United Nations Food Systems Summit next week in New York.

While farmers are ramping up harvest and football season, U.S. ag leaders in government and the private sector have been wringing their hands over the U.N.'s first Food Systems Summit on Sept. 23, looking to pivot other countries away from overarching positions on sustainability goals and how food is grown that could hurt U.S. export competitiveness globally.

At its core, the U.N. Food Systems Summit is the United Nations' way of checking on its own 17 sustainable development goals for 2030, originally set in 2015. High among those goals is "zero hunger," but the pandemic has only increased food insecurity globally. There are an estimated 811 million people globally who are undernourished, according to the U.N.'s Food and Agriculture Organization.

These kinds of events often translate into a long list of government leaders describing how they are improving their food systems and meeting U.N. sustainable development goals. Farm groups, nutrition advocates, environmentalists and food companies around the world are wanting to weigh in at the summit. At the World Food Prize in Des Moines, nearly every topic on the summit agenda has been monitored, which included taking part in the three-day pre-summit held in July.

"The summit is really striving to advance food systems into new directions in a way that's never been done before," said Barbara Stinson, president of the World Food Prize. "If nothing else, it's focusing the entire world on the issues of global food insecurity, which is our mission too, and focus that attention and elevate what's going on that can really contribute to progress." Stinson added, "It's bringing focused attention to action in so many different directions."

Dealing with food systems of 195 countries touches on hunger, nutrition, resiliency and climate change. Food waste alone amounts to $1 trillion annually and the greenhouse gas emissions of food waste globally are large enough that, if it were a country, it would rank only behind China and the U.S. in total emissions. These are some of the hidden costs in the food system.

"In total, we need to factor in the hidden costs of a wrong food system, said Martin Frick, the deputy special envoy for the summit. "The people who turn ill, the health care system that is dealing with so many avoidable diseases and the environmental damage, the climate damage that is being factored in." Frick added, "I'm always saying cheap food is actually pretty expensive, if you think about it."

COUNTERING THE EU'S FARM TO FORK

At a meeting of G-20 agricultural ministers, Vilsack told reporters Thursday he is "personally and aggressively promoting this notion" of sustainable productivity for the Food System Summit by looking for "like-minded nations" that focus on the role of science in agricultural production. Though the Biden administration just started marketing its coalition, Vilsack said his recruitment efforts have included Brazil.

"We believe that actually a more sustainable agriculture can also be a more productive agriculture, and can, in fact, meet the needs and demands of a growing global population," Vilsack said.

Getting Brazil aligned with the U.S. would be a critical influence, Vilsack said, but the secretary said he believes Canada and Mexico will have similar views, and other agricultural export countries in South America as well.

"Anybody who joins with us, it's going to be important," Vilsack said. "But if it's just the U.S. and Brazil, that's still two really, really large ag countries."

Vilsack's moves to create a coalition going into the Food Summit reflect the Trump administration's take that leveraging agricultural productivity will provide a counter to the European Union, which is also building a coalition around its "Farm to Fork" initiative.

"I think it provides a balance and essentially is saying to our farmers and the farmers of other countries who join this coalition that we think it's possible and appropriate for science and innovation to play a significant role in helping farmers be more productive and being more sustainable," Vilsack said.

The secretary cited the value of biotechnology, gene-editing, artificial intelligence and precision agriculture as tools and technology to help improve climate-smart agricultural practices. "This coalition understands that it has to provide the financial capacity for farmers to adopt these practices," he said, adding "it has to reduce the risk -- eliminate the risk -- from a financial perspective for farmers to do what they want to do."

The EU's Farm to Fork, rolled out in 2020, includes goals to cut pesticide use 50% and reduce fertilizer use 30% by 2030, and expand organic agriculture on at least 25% of the land. One goal of EU trade policy is to get commitments from other countries to follow the Farm to Fork strategy as well.

PUSH BACK ON BOTH SIDES OF ATLANTIC

The EU is facing questions and concerns about whether its Farm-to-Fork plan would reduce productivity and lower farm income, Vilsack said. Yet, similar statements could be made about conservative farm groups and Republican politicians criticizing the Biden administration's climate-smart goals and attacking climate provisions in the agricultural sections of the budget reconciliation bill. The ranking member of the Senate Agriculture Committee, Sen. John Boozman, R-Ark., questioned what exactly USDA would do with the creation of a Civilian Climate Corps, which Boozman said is "better described as the climate police."

"We have no information on what the climate police may be, what its purpose is, how it will work, why it is needed, or any other answers to the most fundamental questions American taxpayers expect this body to know and deliberate on before spending trillions of dollars," said Sen. John Boozman, R-Ark., ranking member of the Senate Agriculture Committee at a hearing this week. Boozman added, "We do know that President Biden's so-called American Jobs Plan proposes mobilizing the next generation of resilience workers to advance environmental justice. We also know that in this bill, Democrats are directing the climate police to operate on federal forests and private land. That's the last thing farmers and ranchers need."

Increasing climate-smart agricultural practices "is a market imperative," Vilsack said, that will make U.S. products more competitive in export markets. Consumers and trading partners are demanding more details about where food comes from and how it is produced. Making a strong case for sustainable production will tie into exports. "I can tell you our competitors are going to want to make that case and are going to make that case and so we have to be in a position to be able to do so as well.

"It's also a way of reassuring farmers that nothing's going to come out of this summit that would make it more difficult for our products to be sold globally, or for our way of agriculture to be -- to make us less competitive," Vilsack said.

Since returning to USDA, Vilsack has constantly maintained that farm income needs to be improved. "One way of improving farm income is by creating the ability of farmers to take full advantage of value-added market opportunities that are generated from sustainable production, and potentially qualify farmers for carbon markets that exist or that will be formed."

Current U.S. agriculture policy relies on voluntary conservation practices through USDA programs farmers are familiar using such as the Conservation Stewardship Program (CSP), Environmental Quality Incentives Program (EQIP), the reserve programs and technical assistance. The House Agriculture Committee, as part of the budget reconciliation package, is expected to introduce $28 billion in conservation funds for climate-smart practices. However, the language on just how Congress will divide those funds has not been released. The Senate also passed a bill earlier this year, the Growing Climate Solutions Act, that gives USDA the ability to set standards for carbon-credit markets and help farmers and ranchers qualify their operations for those credit markets.

With two more days of meetings in Italy, Vilsack said he and others in the Biden administration were going to keep pushing their approach to "climate-smart agriculture" and setting the stage for the Food Systems Summit and a World Trade Organization gathering. Vilsack reiterated the Biden administration goal of farm production "moving towards that goal of net-zero emissions agriculture by 2050."

LIVESTOCK: WE WANT IN

Industry groups have gotten together to try putting their thumbprint on the Food System Summit as well. In an online event earlier this week co-sponsored by Elanco, the company's top executive and others lamented that animal agriculture and corporations had been shut out of the summit process.

"I hope we're a little disruptive," said Jeff Simmons, president and CEO of Elanco. He added, "We're the only industry I know that's bringing together 40% to 50% of global industry, because we're not really invited to the party, and say, look, we want a seat at the table."

Simmons wants a statement at the end of the Food Systems Summit saying, "Animals matter," and "We want to play a role in nutrition and the planet." Simmons added that animal agriculture can address global hunger and cool the climate by 2030, but he added any solution cannot translate into a change in diets or regulations.

"That's now how the world works. Let us use innovation. Give the challenge back to us. From the land to the animal, we can cool this climate in nine years. We take on that challenge. Let us be part of that challenge. Don't try to take us out with regulations, or rules, or costs or trying to change diets. That does not make sense. We need that agenda to be part of the post-meeting agenda." 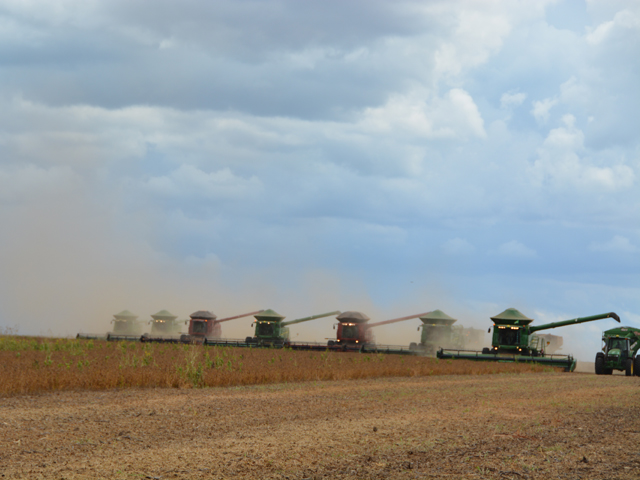