Hurricane Ida made landfall near Port Fourchon, Louisiana at 11:55 a.m. on Aug. 29, 2021 as a strong Category 4 hurricane with maximum sustained wind speeds at landfall of 150 mph.

The track of the storm has only changed slightly from this article written on Aug. 27, with the major changes about a more gradual turn to the east.

(To see daily video updates from DTN meteorologists and follow the track on Ida, go to www.dtn.com/hurricane-ida.)

Heavy rainfall and flooding continue to be concerns for crops and livestock in the Delta and Alabama as the system passes through during the next couple of days.

Ida's remnants should pass through the Tennessee Valley on Tuesday, then go through the Mid-Atlantic and Northeast on Wednesday and Thursday, respectively.

Outside of where the hurricane hit along the coast and rain could reach a foot or more, widespread heavy rainfall of 3 to 6 inches is expected close to the center of the storm, including for the southern half of the Delta region. Tornadoes are also a threat, though wind damage should be minimal and the worst is focused across Louisiana and southern Mississippi.

Prior to the arrival of Ida, the cotton crop was considered in really good shape this year across the Delta and Southeast, with its highest rating in five years.

However, Ida was threatening flood and wind damage in that area from Sunday afternoon into Tuesday.

IDA was noted for how quickly the system intensified. In the nine hours prior to early afternoon Friday, it went from maximum sustained winds of 45 miles per hour at 4 a.m. CDT to 75 mph, a became a Category 1 hurricane.

It crossed the western tip of Cuba late Friday, then moved into the Gulf of Mexico by Friday night. Overnight from Saturday into Sunday, within a few hours, it quickly moved from a Category 2 to a Category 4 hurricane by shortly after 4 a.m. CDT.

Gov. John Del Edwards pointed out at a news conference Sunday afternoon that Ida is "one of the strongest to make landfall in modern times." He said the "extremely strong" Category 4 doesn't make much difference from if it would have been a Category 5 hurricane. The sustained 150 mph at landfall was just short of the 157 mph or higher that would have made it a Category 5 hurricane.

The governor announced he has activated the entire Louisiana National Guard of 4900 members to help deal with the impact of the hurricane.

President Joe Biden also announced he had signed emergency declarations for Louisiana and Mississippi to trigger full federal resources to help the region. "The storm is a life-threatening storm," he emphasized during a news conference.

On Saturday evening, Louisiana's agriculture department announced ag departments from several other states would waive their health certificate requirements for livestock coming into their states because of Ida.

Included in this Emergency Declaration are: Alabama, Arkansas, Louisiana, Mississippi, Tennessee and Texas.

CONDITION OF COTTON CROP BEFORE STORM

A week ago, USDA reported how good crops were in the area.

According to the USDA NASS data released Aug. 23, the good-to-excellent rating of 71% for the cotton crop is the highest rating in the past five years. All states in the Delta and Southeast have at least a 70% rating except for Tennessee, which is at 67%.

Rainfall has been plentiful this year even before Ida. Outside of some small patches of dryness that have shown up in the Delta during the last couple of weeks, consistent rainfall has led to good crop stands across both the Delta and Southeast.

Most of the states in the Delta and Southeast are falling a few ticks short of average. The only state outpacing either of these is Mississippi. A similar situation is found in soybeans, where crop progress on soybeans setting pods is a few percentage points behind the average pace outside of Mississippi. Very little of the crop has dropped leaves, but that process is starting up across the Southern U.S.

CONDITIONS WERE FAVORABLE FOR STORM

Conditions were favorable for rapid hurricane development. Wind shear, which tears apart thunderstorms and does not allow them to remain focused in a single area, was decreasing around the storm, keeping thunderstorms near the center of the storm. The environment around Ida and its path was moist, keeping the storm from drying out.

And water conditions in the Gulf of Mexico are warm enough to bathe in, between 29 and 31 Celsius (84 to 88 Fahrenheit). The general rule is that temperatures need to be above 26 C (79 F) to support tropical storm development. Temperatures above 29 C (84 F) allow rapid growth and intensification. That continued through the weekend as the storm moved northwest.

By Sunday afternoon, the system made its landfall on Louisiana the coast, and Louisiana's governor said it was the worst to hit the state in 150 years.

Ida is starting to slow down and will move northward up the Mississippi River through Tuesday before turning eastward and moving through the Tennessee Valley and the northern portions of the Southeast or southern Mid-Atlantic.

Elaine Shein and Mary Kennedy also contributed to this story. 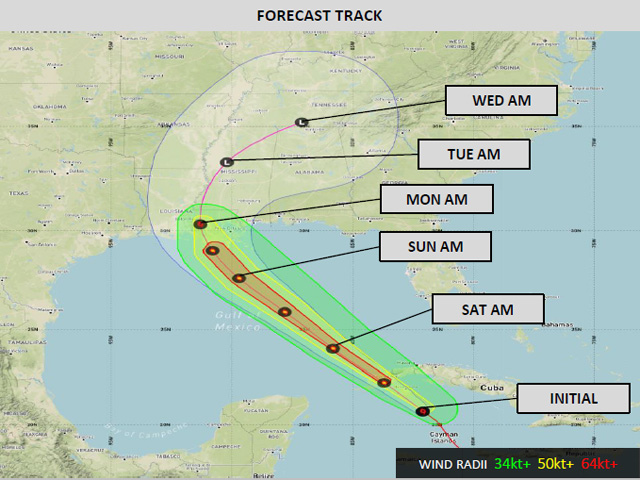