KANSAS CITY, Mo. (DTN) -- Former Kansas Sen. Pat Roberts on Monday urged caution for Congress and USDA in making any change to rules for cattle markets and the packing industry.

The former chairman of the Senate Agriculture Committee also cited the need for USDA involvement in setting ground rules for carbon sequestration programs.

Before retiring from the U.S. Senate after last year's election, Roberts was known for his skill in blending humor and sarcasm into his commentary on almost any subject, a skill that remains part of the retired senator's charm. On Monday, Roberts was the keynote speaker to kick off the Ag Media Summit in Kansas City, Missouri.

On meatpacking, Roberts defended the packing industry focus on "value-based" contracts with producers, rather than relying on the cash trade. The senator cited testimony from a Kansas producer about the quality of beef. Roberts said "value-based contracts" have led to increased consumer demand for beef, which has benefited the entire industry. He counters his former colleague, Sen. Chuck Grassley, R-Iowa, over the cash trade versus contracts. Grassley supports setting a standard for cash trade markets. Roberts said he is unaware of any research showing how a certain percentage of negotiated cash trade changes the prices for the cattle market.

As Senate Ag Committee chair, Roberts largely held up legislation over the past couple years that would have challenged current marketing dynamics in the cattle markets. Roberts pointed to the fire in a Kansas packing plant, COVID-19 and the cyberattack against JBS as events that affected packer capacity. The result was a decline in cattle prices and increase in beef prices, "all driven by pure economic principals," Roberts said.

The response is complicated, he said.

"The processing industry is adjusting by adding capacity as quickly as they can," Roberts said. "The question for us in the meantime is, how much damage will regulations do to the marketplace by artificially manipulating the pricing mechanism?"

USDA is working on at least three different rule changes to the Packers & Stockyards Act, including reworking a rule over what defines unfair practices. Roberts remains skeptical over any USDA adjustments to the rules. He also questioned USDA investing $500 million in loans to help increase packer capacity through loans and grants to smaller packing plants. Roberts credited at least 30 members of Congress who have written Agriculture Secretary Tom Vilsack to ensure the funds go only to the smallest of operations.

Roberts cited an article calling carbon sequestration an "ag-tech Gold Rush" of more than 100 voluntary markets. Roberts said a "plethora" of companies and organizations are offering a mix of plans paying farmers anywhere from $7 a ton to $40 a ton.

Questions remain, though, about drawing down carbon emissions on a farm to offset a private corporation's emissions. For instance, how do we successfully and accurately measure carbon in the soil, Roberts asked. The effort puts USDA's Natural Resources Conservation Service (NRCS) in a new role, and other USDA agencies as well. Robert said he hoped other federal departments wouldn't get involved in agricultural carbon sequestration.

"The point is it is already happening," Roberts said. "It's one of those things that's driven by consumers and driven by politics as well. So, it isn't so much if it is going to happen, it's how."

Roberts pointed to programs through Cargill, Corteva and Archer Daniels Midland among those companies that have created carbon programs right now without a role from USDA.

"These people are offering farmers money and going into their programs even without the U.S. Department of Agriculture or Congress."

Roberts also highlighted the story of Iowa farmer Kelly Garrett, who received $75,000 for 5,000 carbon credits selling those credits to the online retailer Shopify.

The Senate in late June passed the Growing Climate Solutions Act with a 92-8 vote. The House has yet to take up that bill or a comparable one.

On infrastructure, Roberts said it was important that the bill got through the 60-vote procedural bar because that reflects bipartisan negotiations. The 60-vote margin ensures that, warning against efforts to turn bills into a 51-vote majority.

"You must work with your folks across the aisle to get something done," he said. "It makes you work together."

Still, Roberts said he thinks the infrastructure bill means Kansas residents will be spending money to "bail out" mass transit in New York, "although there are some things in there that are very good for agriculture," Roberts said. 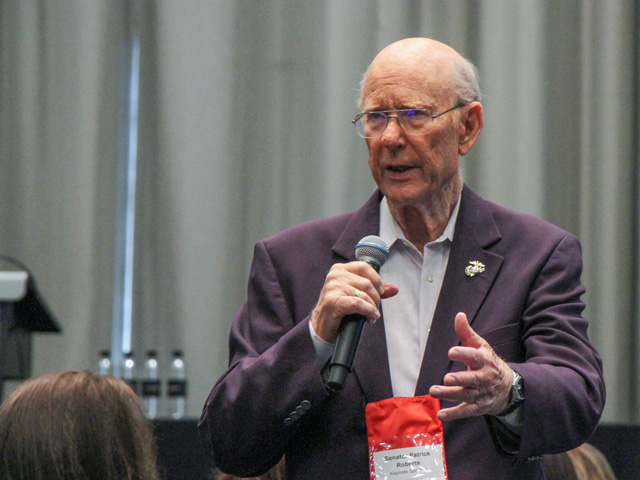