OMAHA (DTN) -- Although Indiana farmer Kip Tom left his post in January as the U.S. Ambassador to the United Nations Agencies for Food and Agriculture, he is keeping tabs this week as the U.N. holds events while global agricultural leaders gather in Rome.

The United Nations is holding a three-day "presummit" in preparation for a shorter U.N. Food Systems Summit set for this fall in New York.

Under the Trump administration, Tom was effectively in charge of the U.S. policy toward the Food Systems Summit and challenged the direction of the EU Farm to Fork strategy to reduce the environmental footprint of agriculture. The Trump administration had criticized the EU plan, which they argued would abandon new technology and risk gains in agricultural production.

"We saw this as an extreme risk going forward," Tom said in an interview with DTN last month. "There are no negotiated outcomes from the summit itself, but it will still probably guide food policy."

President Joe Biden just late last month nominated Cindy McCain to be the new ambassador to the UN Food and Agricultural Organization (FAO), so a lot of the planning over the past six months going into the pre-summit has been without a U.S. ambassador in place.

USDA Deputy Secretary Jewel Bronaugh is leading the U.S. delegation to the pre-summit this week. In a news release, USDA stated Bronaugh and other U.S. officials will be working with other countries and stakeholders at the event "to build coalitions and consensus around shared objectives including food security and nutrition, climate change, and equity and inclusion," USDA stated.

"Through the Food Systems Summit and this Pre-Summit, we have an opportunity to collectively refocus the world's attention on ending hunger and poverty and building more sustainable, equitable and resilient food systems," Bronaugh said. "I look forward to collaborating with other governments and private sector partners to achieve these goals through science-based solutions, innovation, and investment in resilient markets and rural infrastructure worldwide."

Earlier this month, the U.N. released its annual food security report, stating that hunger rose dramatically globally as the COVID-19 pandemic took hold in 2020. The report estimates between 720 million to 811 million people faced severe food shortages last year, an increase of 161 million over 2019.

The pre-summit includes panel discussions involving a long list of agricultural ministers from around the world, agricultural finance businesses such as Rabobank, environmental and other non-governmental groups, scientific organizations, and some other private businesses. Jon Doggett, CEO of the National Corn Growers Association, is set to participate in a panel discussion Tuesday looking at the transition toward net-zero emissions and farm practices that support nature.

Tom told DTN the biggest problem with the summit is how its policies revolve around European views of agriculture. When planning for the summit began, Tom said his office in Rome at the time was working with the State Department, USDA, EPA and the U.S. Trade Representative's Office about the direction of the summit.

"Because of what is going on in the EU right now and their Green Deal, the Farm to Fork initiative, the EU is trying to use this summit as a trojan horse to try to get that policy enacted around the world."

That should raise eyebrows among American agricultural policymakers, he said. "They are going hard against us -- the way we produce crops and livestock and the way we work with the environment," Tom said.

Leading up to the summit, the EU adopted an 18-page list of goals the European Union wants to achieve to meet 17 U.N. sustainable development goals. The goals fall heavily in-line with the EU's Farm to Fork plan to drive down emissions and increase organic production.

"They have a very coordinated and consolidated message that they're promoting everywhere," Tom said. "In the meantime, we're just continuing to do our business of cleaning up the environment, increasing productivity and feeding more people with less cost and using less resources."

Overall, Tom said the Farm to Fork initiative has several of the same goals of U.S. agriculture to lessen carbon emissions and reduce the impact of agriculture on the environment.

"Whether it's the livestock sector or cropping sector, we're using more cover crops, using less tillage and we're increasing productivity," Tom said. "We've been working 'within our planetary boundaries' and they're (the EU) probably 20 years behind us. Nonetheless, they act like they are leading on this and the rest of the world is watching them."

More broadly, the EU is stressing its Farm to Fork standards as a demand for trade policy with countries in Africa, Southeast Asia and Latin America. "If you want to trade with the European Union, you're going to have to change your food production systems to the model that the EU is building in its Green Deal Farm to Fork initiative, which is unlike anything that is based here in the United States."

Tom noted the U.S. embraces food production from organic to commercial production and provides consumers with choices on that food production. Tom sees the EU model as focused heavily on supporting the wealthiest consumers. "Their food system is an indulgence of the rich," he said. "It's indefensible scientifically and indefensible morally. And when I look at developing nations in Africa, what they are wanting to propose there is a crime against humanity."

During an opening panel of the summit on Monday that was webcast, some of the most withering criticism against the current global food system came from a U.S. economist, Jeffrey Sachs, a U.N. adviser on sustainable development goals. Sachs said the global food system now is based on profits and volumes of production, but little support for helping the most impoverished people to eat.

"It's all based on extreme irresponsibility of powerful countries with regard to the environment," Sachs said of production agriculture.

Sachs called on countries not to turn over food and agricultural system goals to the private sector. He maintained that had happened more than 100 years ago with the U.S. military helping food companies control agricultural production in small, underdeveloped countries. Sachs said, "I come from a country that doesn't' care about the world's poor; they don't care about their own poor," He added, "So we're in a world that's really tough. The private sector is not going to solve this problem."

Martien van Nieuwkoop, global director of agriculture and food at the World Bank Group, said during Monday's pre-summit opening session that malnutrition, obesity and environmental losses such as deforestation and pollution amount to about $12 trillion a year, which is more than the total market value of global agricultural and food production. Nieuwkoop said the "food system is off-track" despite a heavy focus on polices, investment and consumer spending.

"How can you put in place clear incentives toward healthier outcomes for people, the planet and the economy?" Nieuwkoop asked. "And how do we use financing as a lever to reduce negative costs and benefits associated with farming and food solutions?"

Nieuwkoop said more demands should be made for companies to disclose their environmental, social and governmental obligations and lead to more leverage from consumer dollars to change agricultural and food systems as well.

Leading up to the summit, Tom said there were heated calls in June in which frustration was expressed by farmers and companies over the direction of the summit. That led some people to leave advisory committees as well. Tom said he expects the dialogue around food systems to continue long after the summit this fall.

"It's very bureaucratic, it moves very slow and oftentimes it ends with no results, so that might be the best thing that comes from this is we have no results."

Still, Tom noted position statements from countries or the U.N. itself coming out of these summits can impact the way people perceive U.S. agriculture, or how they buy products. It has a ripple effect in trade talks as well.

"It's really time for us to get in engaged as farmers around all of this. I know they're busy producing a crop, we all are. But the reality is everyone needs to be involved." 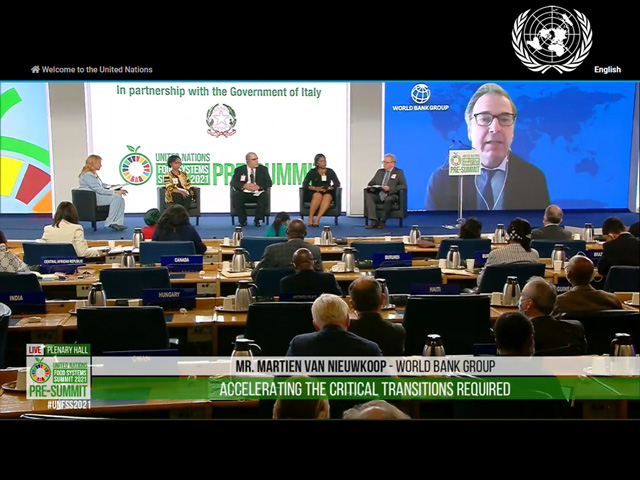